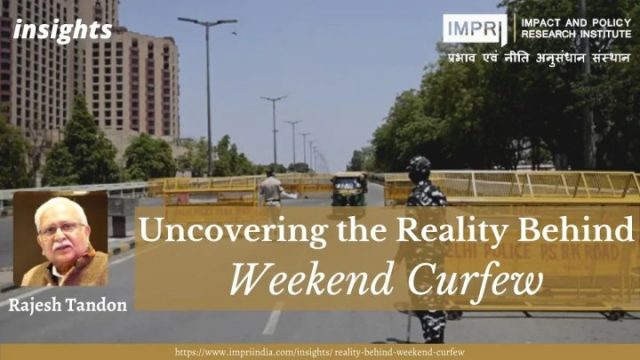 “I don’t care, rather get Covid than my children die of hunger”, shouting dozens of women, and men, stopped traffic on a busy Mehrauli-Badarpur road last Thursday morning at 8 am. They were demanding that buses, tempos, Gramin Sewa and other public transport stop at Sangam Vihar bus stand to take them to work in time. Soon enough, scuffles and fights broke out and police started a lathi charge.

The TV and other media condemned such ‘unruly’ behaviour and justified further strong actions by law enforcement agencies.

Sumitra and her five neighbours, who started shouting that morning, live in informal (even unauthorised) highly congested colony of Sangam Vihar in South Delhi. While there is no data with the government, it is estimated that nearly five lakh people (men, women, children) live in this colony, which began to get inhabited from early 1990s only.

All of them have precarious working arrangements; they are either self-employed as individual service providers or petty contractors; or self-employed as vendors, ‘uber’ drivers, delivery boys (some girls too). And, the other lot are holding on to jobs with limited formal contracts (not providing for leave, medical or other facilities routinely available to government employees).

So, when in its enthusiasm, the Disaster Management Authority imposed fresh restrictions right after Christmas, in response to increasing cases of new infections of Covid, it reduced to 50% occupancy of all non-privately owned transport…buses, tempos, Gramin Sewas, three-wheeler autos, and even taxis. The so-called ‘yellow’ benchmark of infections triggered this pre-determined response of authorities.

Thousands of informal workers (as described above) began to get late to work since the transport capacities were significantly curtailed overnight. The authorities seem to have a habit of deciding in the evening and new restrictions become applicable from next morning, without any notice or time for ordinary citizens to make alternative arrangements.

Yes, the infections are increasing; yes, some restrictions are needed. Yes, the Disaster Management Authority is responsible to act. Yes, it must act. No arguments about that.

But, in whose interests does it act? Which section of Delhi’s citizens does it take into account when it imposes such restrictions? What lessons it has learnt from previous lockdowns over the past two years? Has it conducted any studies to assess different impacts on different citizens of this sprawling city? Did it not notice the plights, loss of livelihoods, hunger, pain and distress ‘reverse’ migration of millions of informal workers from cities like Delhi in first round of lockdown in APRIL/May 2020?

Repeated orders to reduce occupancy in buses, tempos and metros to 50% of seating capacity, actually, result in more than 50% reduction in number of passengers traveling; at rush hours, nearly 75% of total ‘carrying’ capacity of these transports is curtailed. Why?

Because, more standing people travel in buses, tempos, metros than total seats available. Has it not been noticed by chauffer-driven, car traveling decision-makers, living in Lutyen’s sprawling Delhi with wide roads, big bungalows and no informal settlements under NDMC areas?

Further restrictions are imposed beginning today…weekend curfew, it is called. What is a weekend? Saturday/Sunday off? For whom? Who gets benefit of a weekend? Have any of the informal workers and self-employed workers ever ‘rested’ at home over Saturday/Sunday ‘weekend’? Is it not ‘good’ business time when middle-class households (like me) have weekly off from our jobs/workplaces so that we can use the various service-providers at our homes? What weekends for plumbers, maids, drivers?

Or what weekend for retail shop owners and their staff (living in Sangam Vihar type colonies around Delhi, and indeed India)? Since middle-class has weekend, the informal retail workers must work (and therefore travel to work)?

Even those employers who follow labour laws in Delhi make their employees work for six days at a stretch and 9 hours a day (without official overtime). Weekly off, even when given, is not necessarily on Saturday/Sunday ‘weekend’.

So, weekend curfew further destroys livelihoods of informal workers and those self-employed, as described above. Sumitra and her Sangam Vihar neighbours have no choice but to protest if they lose their day’s wages and earnings, or even precarious job, if they reach late or can not go due to weekend curfews.

This is the reality of not just Delhi and its surroundings; it is all over India, and even the world. The notions of weekend, five (even four being discussed now) days a week, and work-from-home is a luxury that 80% of India’s workforce does not enjoy.

How many times their realities will be ignored by policy-makers and elected leaders?

Read another piece by Rajesh Tandon titled Zooming Through Life

Dr. Rajesh Tandon is Founder President of PRIA, New Delhi. He is also a Guest Speaker with IMPRI, New Delhi