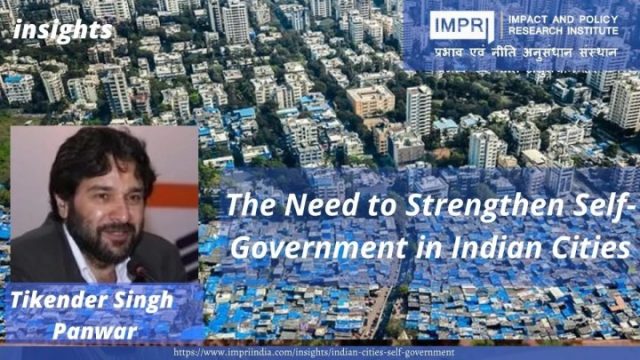 A few days ago, a Chandigarh-based researcher friend asked whether there was a provision in the local bodies laws to ensure contestants in elections, candidates and parties, make implementable promises. And if they were to promise something beyond the the scope and capacity of the municipality, can they be sued in court. How I wished we could apply such a law to our prime minister’s promise of Rs 15 lakh in every Indian’s bank account. Indeed, candidates must only promise what they can deliver.

The researcher friend was echoing a former mayor of Chandigarh, who lost in the recently held civic polls in the Union Territory. The mayor probably referred to the Aam Aadmi Party (AAP) promising to replicate its “Delhi model” in Chandigarh.

The AAP emerged as the single largest party, worsting the incumbent Bharatiya Janata Party (BJP) in the polls for the Chandigarh Municipal Corporation. Not only did some of the BJP’s former mayors lose despite the party’s high decibel campaign, but its defeat was starker since the UT is under the Centre’s control and its Member of Parliament is also from the BJP.

The AAP’s key promises were 20,000 litres of free water supply to all households each month, clearing garbage from the Dadumajra dumping site, installing CCTV cameras and making wifi accessible across the city. These poll promises require debate on urban governance issues.

The demands and the slogans of the Chandigarh civic elections, like free water, free electricity and social housing, resonate and reinforce the concept of “democratisation of surplus”.

BR Ambedkar, the architect of the Indian constitution, spoke of “one person, one vote”. It should also mean ‘one man, one economic unit’, but these slogans become more relevant because of the widespread and vast inequity.

Cities have become centres of capital accumulation through expropriation, particularly in the last four decades. Twin processes have been at work.

First, the State, which provided essential services to the citizens, has passed on this agenda to private capital. Services like water supply, education, healthcare, even housing are now sectors for private capital aggrandizement.

According to an estimate, real estate is the foremost factor in capital accumulation in some cities.

The other reason people have lost their capacity to attain or hold assets is the nature of capitalist production in the cities. According to one estimate, most workers – nearly 94 per cent – are engaged in the informal sector. This has substantially diminished the bargaining capacity of workers in the cities.

The city itself has become a centre of capitalist accumulation. As several urban planners have commented, cities are the centres of surplus generation and hence must be considered factories.

The democratisation of surplus in such urban centres and slogans linked to this idea, like free water and electricity, more health centres, are neither freebies nor populist ideas but connected to the class demand of the working people.

Even in Chandigarh, the middle-class elite still voted for the BJP, whereas the poorer and marginalised sections voted for the AAP and Congress.

Such democratising of surplus in the cities is taking place in different parts of the world.

In many cities, re-municipalisation is being implemented in service delivery. For example, in Barcelona, progressive groups raised the slogan “Let’s Win Barcelona”, and after winning the elections, worked to democratise the urban commons, especially in the digital arena. Likewise, in Montreal, there’s been an attempt to shift the city’s mobility from high private driven vehicles serving the interests of oil and automobile capital to public transport.

Second is the issue of the role of local self-government. After more than a quarter of a century of the 74th constitution amendment, functions, functionaries, and finances have not been transferred to local governments across the country except Kerala.

The universally transferred function is that of garbage collection. We will soon have even the registration of births and deaths passed on to the central government. Cities are more like adjuncts of either the state or Centre. The demand for municipal cadre matching the state cadre services has not been implemented anywhere.

Cities must be governed by the democratic decentralisation principle envisioned in the 74th amendment. City planning, apart from other functions, must be passed on to the city council, preparing plans through ward committee meetings and community participation. However, the reality is that citizens are alienated from the decision-making process.

Thirdly, the debate on promises by candidates and political parties and their feasibility – promises are made to break the inertia of the existing delivery system and according to the class of people which a political party represents.

Architect Charles Correa, the chairperson of the first urban commission formed in 1986, felt that urban governance in India desperately needed accountability. He said around the world, more and more cities are being run by political leaders directly elected by the people of that city. So, they champion the interests of the citizens, or they will not get re-elected. Unfortunately, in India, we find that cities are run by state chief ministers who are not elected by the city’s citizens and hence utterly oblivious of the city’s requirements and demands.

Therefore, accountability in the elections must not just be narrowed down to the promises made during the elections but should be drawn to a larger canvas of “self-governance” in cities. This should be done by ensuring not just more extensive participation of people but democratising the entire process.