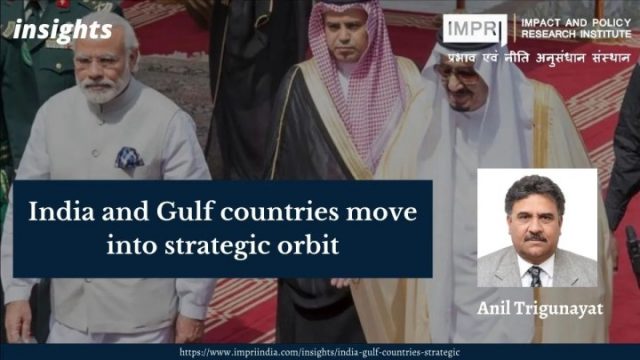 Prime Minister Narendra Modi’s first visit abroad in 2022 was supposed to be to the UAE and Kuwait. It had to be postponed due to the spiraling Omicron Covid virus both in India and the Middle East.

However, the relations with the West Asian countries and particularly with the GCC (Gulf Cooperation Council) countries have acquired a truly strategic dimension during the past decade or so. For years it remained a transactional buyer-seller relationship mainly driven by oil, diaspora interests, and remittances.

After Indira Gandhi’s visits in the 1980s and until 2008, we did not have any high-level visit from India to the most important and historically connected region, barely located 2-3 hours away, which is so strategically important for our own wellbeing. Inexplicable indeed! Especially as these countries are so critical to our energy security, maritime security, food security, and of course the diaspora welfare which remain the major planks of our strengthening relationship.

But it has changed qualitatively in recent years. Both sides have become re-engaged with a near euphoria and realistic appreciation of mutual concerns, aspirations, and bilateral mutually beneficial opportunities as well as limitations. No wonder then this would have been PM Modi’s 4th visit to UAE alone even though the first one to Kuwait clearly underscores the strategic importance India attaches to the region.

PM Modi has made a point to visit the Gulf countries including Oman, UAE, Qatar and Saudi Arabia, Iran, Palestine, and Israel even though some of these countries have certain competing redlines.

He became the first Indian PM to visit many countries like Bahrain, Israel, and Palestine. However, India’s de-hyphenation policy and treating individual country relationships on a bilateral standalone basis with broader regional positivity has held it on a good wicket.

PM Modi has been conferred with the highest state honors by many of the countries in acknowledgment of the surging relations. India has expanded the collaborative matrix as new challenges in the region have become quite pronounced.

It is also evident from the fact that India has entered strategic partnerships that encompasses maritime cooperation and use of assets, conducting joint military exercises and exchanges and overall defence cooperation, piracy, counter-terrorism, repatriation of wanted criminals and fugitives, cyber security, trade, and investment, new and sunrise sectors like space, nuclear and renewal energy and technological collaboration which will also define our future specialised engagement with the major countries in the region.

For years our relations were seen and conducted and held hostage by the shadow of their relationship with Pakistan and Islamic connect. Even that has changed. Both Saudi Arabia and UAE and others have recognised Islamabad’s hand-in-glove approach with globally denounced and sanctioned terrorist groups. This was evident during their reactions to India‘s abrogation of Article 370 in J&K and action with regard to Uri, Pulwama terror attacks, and retaliatory Balakot strikes.

It was a significant diplomatic achievement. Besides, the UAE Foreign Minister invited her Indian counterpart late Sushma Swaraj to address the OIC (Organisation of Islamic Cooperation) meet much to the chagrin and objection of the Pakistani Foreign Minister who considered it as its home turf.

India also welcomed the Abraham Accords between some Arab countries and Israel and reconciliation and rapprochement among various regional powers like Saudi Arabia and Iran including the lifting of the Qatar blockade since any conflict in the region has direct consequences for India’s own security and welfare. It has actively begun to find opportunities to join hands in trilateral or quadrilateral formats wherever feasible–be it in the region or in Africa.

Recently, India became part of a new trade and technology quartet with UAE, the US, and Israel to harness mutual competencies for economic growth and development.

Iran and the GCC put together to provide an important pivot to India’s historic and economic ties with the individual countries. They have also acquired a new heft even in the context of Afghanistan.

Qatar and Iran play a pivotal role in India’s outreach to the new regime via Doha and central Asian connectivity via Tehran (Chabahar and INSTC) despite US sanctions. On the other hand, GCC countries are critical to India’s energy security as it receives over 70% of oil and 90% of gas from them. For the first time, the Indian consortium was able to secure stakes in oil exploration in UAE as its Farzad B field in Iran became a casualty of geo-politics.

Moreover, UAE and Saudi Arabia have become India’s 3rd and 4th largest trading partners and Dubai is an entrepot and transit, trade, and export hub for India as thousands of Indian companies operate in UAE’s special economic zones across the whole spectrum of techno-economic engagement.

New Delhi and Abu Dhabi are negotiating a Comprehensive Economic Partnership/Free Trade Agreement, which should be finalized soon as per Indian Trade Minister Piyush Goyal. Meanwhile, having faith in Indian opportunities many of these countries have committed to huge investments in India and despite the pandemic, they have gone ahead with their intended projects and investments in India.

Crown Prince Mohammed Bin Salman had agreed to invest $100bn in Indian infrastructure, refineries, real estate, and strategic petroleum reserves as they are hoping to attract Indian investments and expertise to fulfill their 2030 Vision. Similarly, UAE has committed to $75 bn in quality and strategic investments. Qatar is also another one scouting for investable opportunities. Oman, Kuwait, and Bahrain are not far behind.

Indian workforce both blue and white-collar has played a very significant role in the growth story of the Gulf countries. The 9 million diasporas continue to be the preferred workforce in the region which has played an important role in India’s P2P connectivity between the countries of their residence and country of their origin by sending more than $50 bn in remittances annually that has been a critical addition for India’s foreign exchange reserves.

But as we have seen during the pandemic the low oil prices or an economic downturn could create an unforeseen challenge due to job losses, localization of jobs, retrenchment, and redundancies due to changing skill requirements. Hence, India had to evacuate a large number of Indians who would be returning back in due course to the GCC countries.

But for that, it is imperative that we retrain and reskill them for the needs of the jobs and times as rich Gulf countries are moving faster towards AI-driven services and manufacturing processes. This will remain a challenge in the medium term.

The Gulf countries are part of our extended neighborhood and our destinies are interlinked. Happily, the relations are at their best, but we shall have to innovate new dimensions of our mutually beneficial engagement.

While bilateral relations are doing well New Delhi needs to also adopt a regional approach and be a stakeholder out of the comfort zone as most countries in the region look up to India as a trusted and objective interlocutor. There might be costs in exercising power so be it lest we leave that space to China which is already very well entrenched in the Middle East. We can’t allow Pakistan yet again.