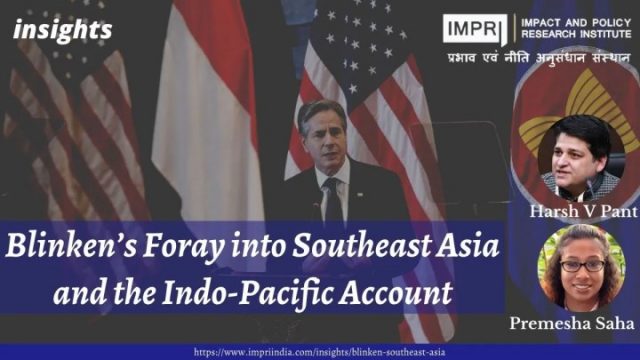 The visit by United States Secretary of State Antony J. Blinken to Southeast Asia in December 2021 — his first since becoming Secretary — underscores the importance that is being accorded to this region by the Joe Biden administration. While Mr. Blinken visited Indonesia and Malaysia, he could not go to Thailand after a COVID-19 case was detected in the press corps accompanying him (He landed there, spoke to the Thailand Deputy Prime Minister expressing regret, and then left for the U.S.). In his speech at Universitas Indonesia on December 14, Mr. Blinken laid out the five core principles shaping the American strategy of a free and open Indo-Pacific. Alongside, he also underlined the mechanisms that the U.S. is adopting to implement these core principles.

On being a reliable partner

From Washington’s perspective, the aim of laying out the initiatives about the region was to drive home the message that America’s Indo-Pacific policy is not just aimed at deterring Chinese aggressiveness and rise. The idea was to present the U.S. as a reliable partner in meeting the challenges that the Indo-Pacific region is facing. For instance, completely aware that the Southeast Asian nations are averse to choosing or taking sides in this U.S.-China competition, Mr. Blinken made it a point to mention that “individual countries will be able to choose their path and their partners. He said: “It’s not about a contest between a U.S.-centric region or a China-centric region as the Indo-Pacific is its region.”

But the impending Chinese threat was always lurking in the background, reflected in the suggestion that “there is so much concern, from northeast Asia to southeast Asia, and from the Mekong River to the Pacific Islands, … about Beijing’s aggressive actions, claiming open seas as their own, distorting open markets through subsidies to its state-run companies, denying the exports or revoking deals for countries whose policies it does not agree with, engaging in illegal, unreported, and unregulated fishing activities”

The competition between the U.S. and China in the Indo-Pacific is in full swing, and this competition is here to stay. Given how both China and the U.S. are trying to lure the Association of Southeast Asian Nation (ASEAN) countries to their side — China with its grand economic infrastructure investment deals and the U.S. through recent high profile official visits as well as the promise of investing more in this region under the Build Back Better World initiative and Blue Dot Network — there is evidence that Southeast Asia is the major theatre where this competition will play out.

In his remarks in Indonesia, Mr. Blinken stressed America’s determination “to ensure freedom of navigation in the South China Sea, where Beijing’s aggressive actions there threaten the movement of more than $3 trillion worth of commerce every year”. He also brought up the 2016 international tribunal ruling which had rejected the Chinese nine-dash-line claims and asserted that the U.S. and the other South China Sea claimant countries will “continue to pushback on such behavior”.

When it comes to investments in infrastructure development, Southeast Asia has been one of the top recipients of Chinese investments under its Belt and Road Initiative (BRI). How these investments have driven countries such as Cambodia and Laos to do China’s bidding in the ASEAN even at the cost of compromising ASEAN’s unity is a known fact. Besides this, China has been heavily investing in port and railway connectivity in countries such as Indonesia and Vietnam.

Mr. Blinken reiterated that the U.S. remains committed to helping close the gap on infrastructure. Recognizing that “ports, roads, power grids, broadband — all are building blocks for global trade, for commerce, for connectivity, for an opportunity, for prosperity. And they’re essential to the Indo-Pacific’s inclusive growth,” he pointed out that the members of the Quad (Australia, India, Japan, and the U.S.) have provided more than $48 billion in government-backed financing for infrastructure for the region.

The infrastructure coordination group launched by the Quad members is seeking to catalyze even more investment and is looking to partner with Southeast Asia on infrastructure and many other shared priorities. Washington is promising to do more under the Build Back Better World initiative and the Blue Dot Network. The U.S. is trying to showcase a comprehensive economic framework in the Indo-Pacific focusing on ‘trade and the digital economy, technology, resilient supply chains, decarbonization and clean energy, infrastructure, worker standards, and other areas of shared interest’.

Though external players will have a limited role in ensuring that the unity within ASEAN is restored, providing proper alternative models of investments for development in sectors such as infrastructure, digital economy, supply chain, and health for the Southeast Asian nations will be critical. The economic framework, investment plans, and promises outlined by Mr. Blinken need to be made operational quickly if Washington is to show that it is indeed serious about sustained commitment toward the Indo-Pacific.

First published in The Hindu The bottom line in Blinken’s foray into Southeast Asia on 5 January 2022.

Read another piece by Harsh V Pant on Delhi-Dhaka relations titled Delhi-Dhaka: An Exemplar of Neighbourhood Diplomacy in IMPRI Insights