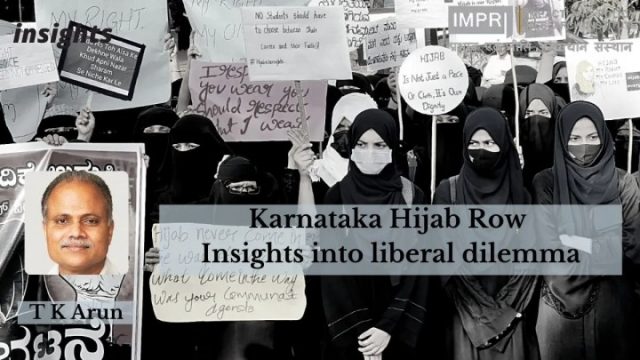 Muslim women need equality, no doubt. But for the needed process of social change to take place, Muslims need the security to live and lead their lives as equal citizens first, especially when their rights are under attack during BJP’s rule.

Karnataka’s ban on the hijab in schools has thrown some liberals in a quandary. Religious control over female sexuality, implicit in the women-specific norm that they should cover up, is oppression, alongside the obvious oppression of the Muslim minority evident in the selective ban on a Muslim religious symbol even as religious tokens of other faiths are deemed acceptable.

Should the ban on the hijab be welcomed the way the ban on the practice of burning Hindu widows on the pyres of their late lamented husbands had been? Or should one defend the normative subjugation of female sexuality to male control embodied by the hijab, in order to oppose harassment of religious minorities?

There is a lot of muddled thinking behind posing the problem as the false choice presented above. Perhaps an analogy would help us think more clearly on the subject. Consider the case of a murder taking place at a house while a burglary is in progress. The perpetrators are two different individuals, but the burglar is caught and charged with both crimes.

Is it okay to let the man hang for his crime? Is it to defend the accused against the charge of murder to defend his act of burglary? If the man is hanged, can he be punished for burglary, perhaps given another chance, to reform and do better in life, even if not quite as dramatically as in the case of Jean Valjean in Les Miserables?

Gender equality is not a problem of logical classification, but the goal of a process of social and political reform. Liberty, equality, fraternity — these we associate with the French Revolution; life, liberty, and the pursuit of happiness, with the American Declaration of Independence. The average liberal embraces these terms with fuzzy, uncritical warmth, untroubled by their mutual contradictions and contextual significance.

If people are at liberty to pursue their interests to the best of their ability, there is no guarantee that the end result would be equality — some might be endowed with superior capability or tenacity, fortune might smile more on some than on others, some would have greater success in their endeavors than others and liberty would end up creating inequality.

The term fraternity, or brotherhood, leaves women out. If we want to be charitable, we could blame this exclusion on the language and its lack of a term that spans the togetherness of siblings of both genders, rather than on the narrowness of the French revolutionaries’ vision.

But the notion that the French revolutionaries upheld the essential sentiment of a close connection among all people as if they all were born of the same mother, is at odds with the fact that the revolutionary zeal of the French did not quite extend to France’s colonial subjects.

Similarly, the signatories to the American Declaration of Independence included slave owners, and slaves were considered property, not people. “We hold these truths to be self-evident, that all men are created equal, that they are endowed by their Creator with certain unalienable rights,

that among these are life, liberty, and the pursuit of happiness,” said the declaration. Men are created equal, not women. It is taken for granted that humanity is the handiwork of a ‘Creator’.

Women fought long and hard for the right to vote, in formal democracies, and won, mostly because of the opportunity that came their way to prove their worth as capable functionaries of the non-domestic world, thanks to World War I, which drew able-bodied men to the trenches, forcing the establishment to draw on the untapped potential of women to perform tasks outside the home that had hitherto been the preserve of men.

President Abraham Lincoln issued the Emancipation Proclamation in September 1862, after the American civil war had begun, freeing slaves in the 10 rebel states of the South with effect from the beginning of the following year:

“That on the first day of January in the year of our Lord, one thousand eight hundred and sixty-three, all persons held as slaves within any State, or designated part of a State, the people whereof shall then be in rebellion against the United States shall be then, thenceforward, and forever free; and the executive government of the United States, including the military and naval authority thereof, will recognize and maintain the freedom of such persons, and will do no act or acts to repress such persons, or any of them, in any efforts they may make for their actual freedom.”

Four slave-owning states were not in rebellion, and the slaves in these states did not become free on account of the Emancipation Proclamation. They became free later when their respective governments changed the law on the subject. The US President exceeded his normal powers as head of the Federal government only in his capacity as commander-in-chief of the armed forces, presenting emancipation of slaves in the rebel states as a war measure to achieve victory sooner.

Lincoln deserves credit for seeing the difference between legal freedom and actual freedom, urging, in the Proclamation itself, the military and other parts of the government, to recognize and maintain the freedom of emancipated slaves and not repress any efforts the freed slaves make for their actual freedom.

That actual freedom remains elusive for black people, although things took a dramatic turn for the better after strong protest movements that led up to the Civil Rights Act of 1964. But even today, black people and supporters of democracy are compelled to take to the streets in the US, shouting that ‘black lives matter.

India is governed by the Constitution that came into force on January 26, 1950. However, social consciousness continues to be conditioned by the norms of caste hierarchy and gender discrimination. Women do not deserve autonomy, declared Manu, ancient India’s celebrated lawgiver.

Do we hear the young men flaunting their saffron scarves and protesting against the hijab in Karnataka or trying out stunts in moral policing on Valentine’s Day anywhere else denouncing the Manusmriti?

The short point is that achieving actual equality and actual freedom for those, whose rights to equality and freedom had been proscribed by tradition, is a long and arduous struggle, a process of social reform that goes beyond changing their legal status. This is true in every society, anywhere on earth.

India’s Constitution deems every Indian, regardless of gender, caste, religion, region, and class, to be equal. That is the legal status. To find out the reality, ask the Dalit bridegroom who was beaten up because he dared to ride a horse like upper-caste grooms, women who are sexually harassed in public spaces and oppressed in private ones,

the Muslim who struggles to find a landlord who would rent him a flat in Mumbai, a student from the Northeast who is addressed as ‘Chinky’ in a busy Delhi market, or a litigant who can hardly afford a lawyer but has to fight his case against someone who can hire the entire roster of the Supreme Court bar council.

Muslim women need equality, no doubt. But for the needed process of social change to take place, Muslims need the security to live and lead their lives as equal citizens. That is what is being attacked under BJP rule — crudely in several states and somewhat more subtly at the Centre.

So, liberals, defending Muslim women’s right to study even while sticking to regressive tradition is the right thing to do. To privilege emancipation from the veil over the defense of a fundamental group right to dignified coexistence is to join the attack against democracy, make no mistake.

The article was first published in The Federal as Dissecting the liberal dilemma over the hijab on 13 February 2022.