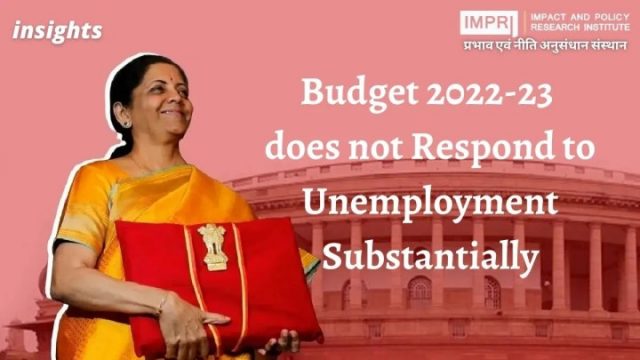 Prof K Seeta Prabhu began the session by highlighting that the budget, called a “booster budget” by the honorable finance minister, has been much anticipated because it is a post-COVID budget and can set the direction for the next two years. There has been a big boost to capital investment in this budget increase of about 35% whereas the discussions prior to the budget have focused much more on the need to boost employment and demand.

A much anticipated increase or maintaining the allocations for MNREGA have not materialized and the pent-up demand for the jobs in the rural areas seem to have got bypassed as a large number of migrants have returned to the rural areas crowding the agricultural sector and seeking work, however, not all have returned to the towns and states because the economy has not picked up adequately. The question of inequality need to be addressed seriously as it affects social stability itself.

Dr Sandhya S. Iyer pointed out that we needed to have a reconstruction policy which will enable the livelihoods’ intersections with the economic activities and with the global systems. The chain between the organized and the unorganized, formal and the informal sector has broken down sharply and the informal sector and the small and micro scale enterprises are no longer getting the right kind of attention.

The economic survey has highlighted that we have come back to a recovery path and the budget immediately on the next day pointed that if the upper growing sectors are strengthened, then the bottom-up may catch up soon. Our vaccination policies contribute in a certain way however on a day-on-day basis, and vaccination rates are also coming down and yet our governments are opening up economic activities.

Financial markets and the financial analysts have given a thumbs up to the budget because according to them the structural conditions needed for the macroeconomic recovery which is emergency credit line guarantee schemes extended to the hospitality sector, capital expenditures enhanced towards infrastructure development, strengthening startup ecosystem, expansion of digital technology may improve ourselves financially and this financial architecture will automatically strengthen the systems.

However we must agree about the unemployment problem, a significant number of the youth are walking around with degrees without jobs. There is unequal distribution of technology and capital in the enterprises today and thus prevalence of crippled micro enterprises, uncertainty in the agricultural sector. These are the things which required focus in the policy making and the budget.

A visible problem is gender based inclusion; however there have been no statements as to how do you get women back into the labor market. Thus, we needed a gender budgeting. It should therefore be a reconstruction budget rather than only a booster budget.

What is hidden is that the entire recovery is essentially driven by the growth of the corporate sector by a few large corporate in the formal sector and as if it’s a K-shaped recovery. Budget allocations for 2022-23 didn’t see an increase in things like education and health; it appears that it’s only physical capital that matters but not human capital.

Examining the subject of labor and livelihoods through a socio-legal lens, Dr Amrita Pillai pointed some unrecognized facts. One is the labor reform agenda that has been brought about by the labor codes. These codes are essentially now the legal architecture within which all employment will be regulated and simplification of labor laws was necessary.

The central challenge to labor regulation really is to provide sufficient rights to workers while creating an enabling environment that can facilitate firm output, firm growth all while creating more jobs and enterprises should also find it easy. Policy makers have missed unequal bargaining power between the worker and the employer itself.

Ultimately the power to renew these contracts also lies with the employer. There is therefore job insecurity for the fixed term employee also that has not been corrected which may further deter him from or her raising issues about unsafe work practices.

Dr Sonia George started with the politics of the budget in the context of upcoming elections. One thing that was missing is no such linkages between the local economy and the micro-macro linkage. Make in India was related to the skill development process but no direct institutions are linked or the government has not analyzed what had happened to these systems which was announced in the last two three years of budget.

The informal economy suffers from lack of skills, lack of proper workplace, lack of stable work and lack of proper income. We expected that increasing provisions in the public distribution system will be announced that would benefit the majority of the migrant workers but there was no such mention.

We have been talking about increasing and growing inequality, unemployment, poverty, malnutrition. However the budget is here and budget has not attended primarily any of them substantially. Neither subsidy nor agriculture has been addressed. The central challenge to regulating a sector like the labor market is how you ensure sufficient rights for workers while also facilitating and spurring firm output and growth. We have to straddle these two objectives very carefully and for that there is a need for a vision, a five or ten year, or a certain plan towards incremental changes, incremental schemes to bring policy orientation with a must good implementation.