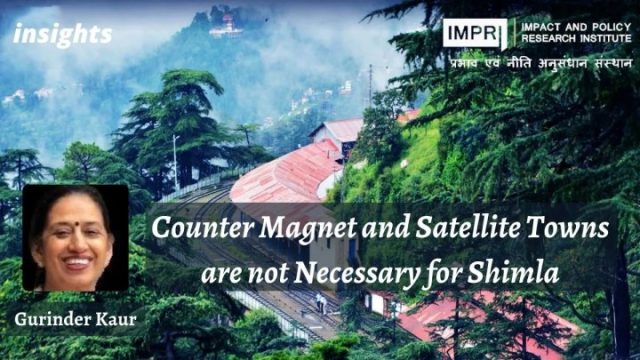 On February 9, 2022, the Government of Himachal Pradesh passed, among the key proposals, the Shimla Development Plan for the construction of a Counter Magnet and four Satellite Towns to decongest and transfer urbanization load for the crore city.

A Counter Magnet town will be set up near Shimla Airport and four satellite towns will come up near Ghandal, Naldehra, Fagu, and Chamiyana. Counter Magnet towns are those that can be developed as alternative hubs of development and have the potential to attract more people/immigrants from a larger city in the area. Satellite towns are small municipalities that are adjacent to a larger city and serve as part of the larger city and provide housing and other amenities for the people working in the larger city.

With the rapidly growing population in Shimla, the people here are facing problems like an increase in traffic congestion and high house rents, and expensive land for houses. To solve these problems, it became necessary to build Counter Magnet and Satellite towns.

Therefore, this decision can be termed as a welcome decision of the Government of Himachal Pradesh, but if viewed and tested from the environmental point of view, it will have a very negative impact on the people and the environment of the state.

Shimla is situated in the hilly region. Mountainous areas cannot bear the weight of population and any kind of infrastructure beyond their capacity. The more cities in the mountains, the more they will be exposed to natural disasters. While such cities in the plains reduce the problems of the main city, the increase in population in these cities in the hilly areas will create more problems.

Shimla falls in an earthquake-sensitive area. In the event of an earthquake, the growing number and population of cities could cause further loss of life and property. The Himachal Pradesh government has been depleting its natural resources through various development programs in the recent past in the name of economic development.

On 19 January 2022, the Government of Himachal Pradesh allowed any kind of construction on 17 green belts which were banned by the National Green Tribunal on 9 December 2000. The Himachal Pradesh government has said that the ban has been lifted from these areas because some people have bought land in these restricted areas which were causing the loss.

It is pertinent to note here that the ban was lifted from 414 hectares of land out of which only 90 hectares are under private ownership and the rest is government land. The lifting of the ban on these areas will lead to large-scale construction in Tutikandi, Nabha, Phagli, Bemloe, Homeland, Khalini, Lakkar Bazar, Sanjoli, Chhota Shimla, Charleville, Jakhu, and Elysium Hill areas.

If the government cares about the interests and rights of landowners then the easiest way is to save the green belts by Payment for Environmental Services (PES). This model is being widely used in many countries of the world. In Rome, England, Costa Rica, and Scandinavian countries, as well as in Palampur in this very state and Mumbai cities in India, this program is very successful in protecting the environment. Using this model will protect the interests of landowners and also save the environment.

In February 2021, the Himachal Pradesh government had sought approval from the Supreme Court to carry out various projects in 736 hectares of forest area which were covered under the Forest Conservation Act 1980 (614 hectares)and the Forest Rights Act 2006(122 hectares). In this way deforestation and construction in the hilly areas cause the ecosystem of the hilly areas to lose its balance which causes the mountains to start sliding downwards.

The Himachal Pradesh government is not only destroying Shimla’s green belts and forests to promote Shimla as a tourist destination. At the same time, the forests of other districts of the state have also been severely damaged due to the four-laning of the Shimla-Parwanoo road.

Ever since the government started widening the road to make it four-lane, the incidences of landslides on this road have increased manifold due to deforestation and the cutting of mountains.

In Himachal Pradesh, 35 major landslides had occurred from June 13 to July 30 (in just 48 days) before the onset of the monsoon in 2021. That was more than double the 16 incidents that occurred in 2020.

On August 11, 2021, 28 people were killed in a landslide in Kinnaur. From early 2021 to early August, natural disasters, including landslides, cloudbursts, and flash floods, killed 246 people, compared to 161people  during the monsoon last year (2020).

On average, one person dies every year within a radius of 100 square kilometers in the Himalayan region as a result of landsliding. When forests are cut down and mountains are blown up with explosives to construct roads, this results in sliding downhills that cause great loss of life and property.

The pro-capitalist/corporate economic growth model adopted in India is also responsible for the increase in average local temperature which results in the increasing number of natural disasters in the mountainous states of India.

According to the Himachal Pradesh State Disaster Management Plan, the temperature in the state of Himachal Pradesh has risen by 1.6 degrees Celsius in the last century, which is changing the trends of rainfall. Earlier pleasant rain used to continue for a week, but now rainy days have decreased and the intensity of rain has increased, causing flash floods, cloudbursts, heavy and unseasonal snowfall, landslides, droughts, melting of glaciers, and forest fires.

These incidents are on the rise. It also makes clear that in the name of economic development, roads have been built in the Himalayan states (Himachal Pradesh and Uttarakhand) to promote tourism, dams have been constructed on rivers for clean energy, and cutting of forests for horticulture have also increased the local temperature as well as the number of natural calamities and the damage caused by them.

Apart from the road and other construction works, deforestation is also done in the state for hydropower projects. Hydropower projects are considered an important part of India’s clean energy plans.

According to a study by Mansi Asher, between 1980 and 2014, 90 percent of the hydroelectric projects and transmission lines were in the forest area of ​​Kinnaur district in Himachal Pradesh, causing severe damage to forests and biodiversity. According to the study, 53 hydropower plants are planned in the Sutlej basin of Kinnaur where 37 people were killed in landslides in 2021.

Hydropower projects on rivers for clean energy are causing huge damage to the environment of hilly states. According to a Landslide Risk Assessment Report by the Government of Himachal Pradesh, more than 18500 villages in 77 development blocks of the state are at risk of landslides.

The Himachal Pradesh government is aware that the population burden on Shimla is increasing. The city does not even have enough parking space for Shimla residents and besides it falls in an earthquake-sensitive area. Then why the Himachal Pradesh government is trying to attract tourists to Shimla. The tourists are attracted to visit Shimla only because of the tall trees that touch the sky and the cool temperature and its natural beauty.

What will Shimla do if the green belt (forests) itself turns into concrete forests and the temperature rises further with such activities of the government? Apart from forests, Shimla will also become a hot city with concrete buildings resulting in the increasing local temperature.

Reducing the number of vehicles and fixing the number of tourists will save the environment of Shimla from excess greenhouse gasses and particulate matter which rapidly increase the temperature here. Instead of widening the roads, the government should repair the old ones and make them more efficient.

More trees should be planted in vacant lots. The means of public transport in the city should also be made efficient. Instead of constructing multi-storied buildings for tourists in Shimla, the government of Himachal Pradesh can save the environment as well as increase the income of the people by following the slogan “Har Ghar Kuchh Kehta Hai“.