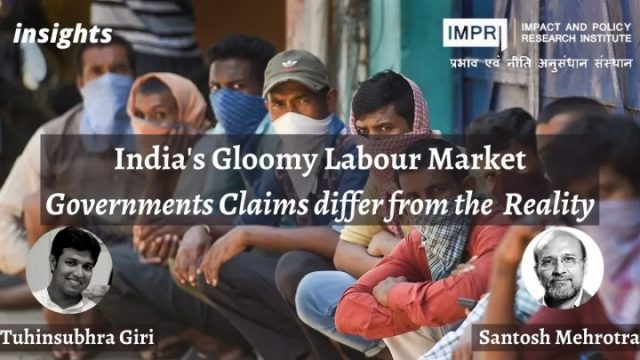 India’s GDP growth rate has been slowing consistently since 2016, thanks to consistent economic policy mistakes made by the Union government, starting with demonetization. It hurt the non-farm unorganized sector MSMEs, as it hurt agriculture (third year running, after two years of drought in 2014 and 2015). Between them, these sectors are responsible for over 80 percent of India’s employment. Poor planning and hurried implementation of the Goods and Services Tax (GST) in mid-2017 also did the same.

Further, the falling absolute levels of merchandise exports in US dollar value each year (from 2013-14 to 2018-19), a first since 1991, destroyed jobs, including the unorganized sector, which accounts for 40 percent of exports. The result was not just falling aggregate demand and GDP growth. The absolute number of unemployed also rose to 30 million, from 10 million in 2012. This was a 45-year high, two years before the Covid-19 outbreak.

Poor management by the Centre during the pandemic added almost 10 million unemployed to the 30 million in just two years. The Modi government had promised the youth two crore new jobs annually. Asked about this in
early 2019, when employment was at a 45-year high, the prime minister’s answers were typically dilatory and diversionary.

He claimed, as he did recently in Parliament, that jobs rose because Employee Provident Fund Organisation (EPFO) enrollments rose. One big limitation of EPFO-based payroll data is the absence of data on unique existing subscribers (or contributors).

Employees keep leaving and rejoining new places of work. This is the main reason for large and continuous revisions in EPFO enrolment. The government cannot claim that these are additions to jobs; it can’t even claim an increase in formal jobs since it is impossible to estimate net annual additions. Next, the PM claimed that Mudra loans to individuals created jobs.

The government has relied upon Mudra Yojana to get banks to hand out loans to small borrowers. In 2018, when the economy was stagnating, Mudra was publicized as a job-generation scheme. Modi said in Parliament, “We gave loans to 13 crores (130 million) youngsters through the Mudra scheme.”

The reality is revealed by the government’s own Periodic Labour Force Survey (PLFS) data. These loans are obviously given to self-employed people, which is a vulnerable form of informal employment. Between 2017 and 2020, the worker participation rate (i.e., share of working-age actually working, especially for males) stagnated.

From 4.35 percent of Mudra advances in 2016-17, bad loans shot up to 9.3 percent in FY19, as political parties organized camps to canvass loans for their supporters. In 2019-20, Uttar Pradesh was the second-largest in sanctions, while Bihar was well ahead of Gujarat and neck and neck with Maharashtra.

Finally, a third claim by the PM runs as follows. In response to a question about India’s job crisis, Modi asked his interviewer: “If a man selling pakoras outside (your) TV office takes home Rs 200 at the end of the day, is that not employment?” (January 2018)

The Union Budget proposes to create six million jobs over the next five years, presumably through a combination of the capital expenditure undertaken by it last year and in FY23 and the Performance-Linked Incentive Scheme initiated in 2021.

The following should demonstrate how seriously the government underestimates the job challenge: Some 5-6 million youth join the labor force looking for work each year. Second, there are already about 40 million openly unemployed, who have reasonable levels of education. Third, there was already surplus labor in agriculture in early 2020.

To the 200 million, another 32 million were added as that number reverse-migrated to villages to escape from Covid. This reversed a trend in place for 15 years.

Starting in 2004, for the first time since independence, non-farm job growth had pulled enough workers out of agriculture to reduce the absolute number of farmworkers. Finally, there are the underemployed, who don’t find enough work (40 hours a week), although they are willing and looking for work.

The Centre, when criticized for ignoring or being ignorant of the monumental challenge responds: “Unemployment existed before we came, has always existed, and why did the previous regimes not solve it?”

Fair enough. But this government inherited only 10 million unemployed; the number is now 40 million. It inherited only 2.1 percent unemployed; why was it 6.1 percent in 2018? The previous government was creating 7.5 million new non-farm jobs and reduced the absolute number of workers dependent on agriculture — a defining characteristic of structural change India must go through.

The employment rate (or share of the working population in the total population, which is constantly rising) has fallen from nearly 43 percent in 2016 (already low by global standards) to 37 percent in just four years. And despite the much-touted ‘Make in India’, why have manufacturing jobs — another feature of structural change in a developing economy — fallen by nearly half, from 51 to 27 million, in a matter of four years?

The ripple effects of growing unemployment are multiple. First, absolute poverty had increased for the first time by at least 15 million between 2014 and 2020; more became poorer since Covid.

Second, this depresses private consumption (56 percent of GDP), which reduces aggregate demand for all goods. Governments can take action to create jobs. First, fill vacant posts of teachers in government schools/universities, for doctors and nurses, for police and judges. Second, immediately initiate an urban employment guarantee program in small cities.

Fourth, the Centre needs to come up with a horizontal strategy for labor-intensive manufacturing, focused on MSMEs, to supplement its Performance-linked Incentives for capital-intensive ones. Finally, more and effective spending on cluster development for India’s 6,500 clusters will support jobs in MSMEs.

This article was first published in The Decan Herald as Claims vs reality: India’s bleak job picture on 13th February 2022