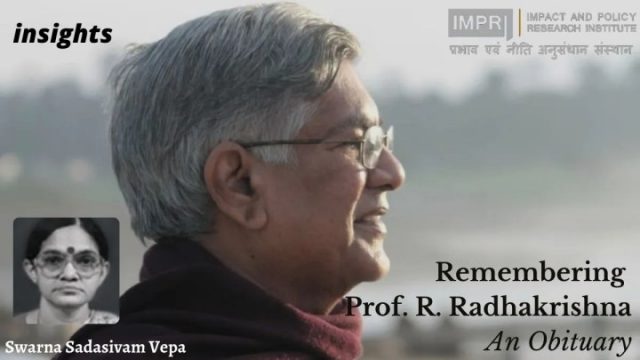 I thank IMPRI for giving me an opportunity to talk about an eminent person like Prof. Radhakrishna. Most of you I am sure know Prof. R. Radhakrishna’s achievements and academic contributions. Prof. Radhakrishna was a great Development Economist, and he was closely associated with the Centre for Economics and Social Studies, Hyderabad and Institute for Development Studies, Andhra Pradesh Visakhapatnam as a Chairperson. I had the good fortune of working for these Institutions in the past six years.

I was shocked and overwhelmed with grief and a feeling of loss, when I came to know about the unexpected, sad demise of Prof. R. Radhakrishna, on 28th January.  All of us, at the Institute for Development Studies, have been interacting regularly with him on several occasions. He was the driving force behind the Institute.

Prof. Radhakrishna was a widely acclaimed researcher, highly respected head of the Institution, and an Institution builder. He was a great Quantitative applied Economist. He made significant contributions. Prof. Radhakrishna believed in scientific and statistical rigor in research.  He believed in transparency and wide dissemination of the research work done. He observed in his inaugural address of the 15th Commonwealth Statistician’s conference held in February 2011.

True to his words said, he wanted researchers and project staff to pay attention to scientific rigor, in sample design and to the reliability of the data collection. He once told me that District level Health Surveys (DLHS)  data is believed to be less reliable than that of National Family Health Surveys (NFHS), due to the negligence in data collection, though the DLHS sample was much bigger than the NFHS sample. At the Institute for Development Studies, in the ongoing project on “Sustainable Agriculture through Natural farming, he made sure that the yield estimates of both natural farming plots and conventional chemical farming plots for various crops were estimated through crop cutting experiments in a scientific manner.

He encouraged me to go to the field and collect data. Before I undertook my data collection for a school project, at CESS, he made me sit with an expert in sampling to finalize sampling design and he made me consult those who had vast experience in designing schedules before I started the fieldwork for the project.  He believed that the field visits and primary data add to the rigor of the research. He said daily field visit reports and ethnographic studies are an important part of the research.

He published over a hundred books and several articles that contributed to Development Economic literature over decades. He has put forth, a compendium of his work as essays in five volumes. Academic Foundation published these books in 2019.

They reflect his thinking, his methods and techniques of data analysis, and his policy recommendations in various contexts. He organized them into five themes. Two of them are on the econometrics of consumer behavior, inflation, and welfare. The other three are agriculture, poverty, and the Indian Economy.  These essays are valuable for future researchers who want to learn the techniques and understand the chronology of development.

I found his articles on Agriculture and Poverty that capture the post-reform events in chronological order, backed by statistical and econometric analysis, comprehensive and useful for teaching. He was in the process of putting together his inaugural lectures on several occasions that reflect his in-depth knowledge and understanding of the issues. I am sure someone will complete the work he started.

Apart from his own contribution to Development Economics, he encouraged researchers and students to disseminate research through publications and presentations in conferences and seminars. He was a great Administrator and Institution builder. I have seen how he brought into existence a Research Institution for Development studies in Andhra Pradesh after bifurcation.

I was amazed by his administrative and academic acumen in getting, space, building, academic staff, and funding. He made the Institution go in a short span of time. He was a simple person without prejudices and was accessible to everyone who wanted to meet him. The country, the Institutions he led, and the entire development economics community have lost an eminent personality.