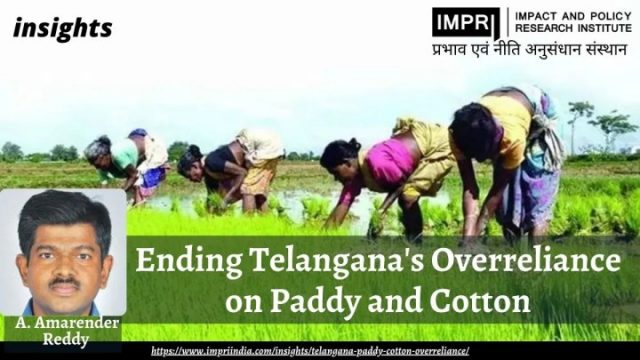 On my recent visits to Telangana, I observed that cropping patterns are highly skewed towards only two crops – paddy and cotton. This overdependence on two crops leads to increased exposure to production and price risks, complete devastation due to pests and disease outbreaks, and environmental perils.

The major crops during the rainy season are cotton (45% of the sown area) and paddy (39%), with a small share under cultivation for red gram, maize and soybean. During the post-rainy season, a majority of the cultivated area is occupied by paddy (77%), with some areas growing maize (7%), Bengal gram (5%) and groundnut (4%).

Telangana is the largest producer of paddy and the second-largest producer of cotton in India. Crop production accounts for about 43% of the state’s agricultural GDP, with the remainder being contributed by livestock, dairy and poultry and so on.

The monocropping of paddy and cotton in the state is leading to problems in procurement as well as excessive exposure to price and yield risk and sudden potential outbreaks of pests and diseases. This happened last year, when the chilli crop failed in some parts of Telangana. With the complete loss of the crop, farmers lost from Rs 1.3-1.5 lakh per acre.

Sustainable agricultural growth in the state requires not only crop diversification but also diversification towards livestock, dairy, meat and fisheries sectors as demand for the latter is increasing steeply. This diversification strategy makes farmers’ incomes more resilient to fluctuating prices and climatic aberrations and can help them realise higher farm incomes.

Over the years, the government of Telangana has been encouraging farmers to diversify crops to increase farm incomes and mitigate risks, with little progress.

Although the yield of paddy is reasonably good with 22-25 quintal per acre, cotton yields are low at 2.8 quintals per acre in the state, but cotton has benefitted from higher market prices in some years. In the rainy season, crops like soybean, maize and red gram are emerging as alternative crops, while in the rabi season, maize, Bengal gram and groundnut are alternative crops.

The government is also promoting palm oil, fruits and vegetable crops in a big way under irrigated conditions. For the last two or three years, the state government has been trying to diversify the area under cultivation for paddy to include alternate crops, such as pulses and oilseeds, with little success. It is time to take up crop diversification on mission mode to avoid procurement problems as well as the other risks mentioned above.

Under the one district-one product approach, crop colonies are promoted to encourage farmers to switch to high-value crops by identifying and providing necessary basic commodity-specific infrastructure, such as processing units and post-harvest infrastructure around a particular commodity in each district. The department of agriculture is also propagating alternate crops through demonstrations, farm mechanisation and value addition, and other site-specific activities.

There are multiple schemes running in Telangana aimed at crop diversification to promote the production of palm oil, horticulture, bamboo and agro-forestry. Cash-and-kind incentives to cultivate alternate crops like palm oil also exist, but with little success.

In many parts of the state, even under borewells, paddy is being grown in two seasons due to policies like 24/7 free electricity. This is not sustainable in the long run and will prove too costly for both the government and the farmers.

Paddy is a water-guzzling crop, consuming about three to five times (3,000 to 5,000 litres per kg grain) more water compared to pulses and oilseeds (about 900 litres per kg grain). Long-run stable policies for promoting crop diversification are the need of the hour. The past policies for the promotion of pulses, oilseeds and other alternate crops are not stable enough to trigger a shift from paddy.

Although alternate crops fetch higher prices in a few years, they are riskier both in terms of yields and prices. In addition, higher market prices of these alternative crops were not able to compensate for low yields. Hence, to promote alternate crops in the state, the government has to implement some sort of price guarantee through the effective implementation of procurement at a minimum support price (MSP), Moreover, the government must make efforts to promote the adoption of yield-enhancing technologies.

Without guaranteed procurement at MSP, the prices of pulses and oilseeds follow the ‘cobweb cycle’, wherein farmers take production decisions based not on forecasted prices during the harvest period, but on the previous year’s prices, resulting in wide fluctuations in prices.

In this scenario, alternative gluts and shortages may occur. To avoid this, the dissemination of accurate price forecasts for the forthcoming harvest period before sowing is important, so farmers can make acreage decisions based on forecasted prices rather than the previous year’s price. One way to do this is by announcing an MSP which will be backed by enough procurement so that the farmers trust the MSP as a price signal for the forthcoming harvest period and plan their acreage accordingly rather than falling into the cobweb cycle.

In addition to the stable price policy, the government has to focus on the development and diffusion of technologies to increase the yields of alternate crops. Groundwater irrigation plays an important role in the diversification out of paddy, as it facilitates controlled water release, which is a prerequisite for growing crops like vegetables, fruits, chillies and cotton. Due to this reason, districts more dependent on groundwater (like borewell irrigation) should be given high priority in crop diversification plans.

It is worth noting that in high rainfall areas such as Adilabad in Telangana and coastal Andhra Pradesh, there is greater scope for not only increasing crop diversity but also cropping intensity by promoting water harvesting structures (like village ponds or farm ponds) to provide supplemental irrigation, which will increase the scope for the cultivation of vegetables, pulses and oilseeds after the harvest of paddy.

In addition to controlled irrigation, studies by the NITI Aayog have indicated that better market infrastructure, like rural roads, village storage infrastructure and well-connected markets, helped in crop diversification towards high-value crops, such as horticultural crops (fruits and vegetables), which needs to be promoted.

This article was first published in The Wire as How Telangana Can End Its Overreliance on Paddy and Cotton Crops.

Read another article by A. Amarender Reddy- Eliminating hunger in a world of Many in IMPRI insights.

Read another article by A. Amarender Reddy- Farmer Friendly Proposals in the Union Budget 2022-23 in IMPRI insights.

Read another article by A. Amarender Reddy- Why banning commodity derivatives trade is like throwing baby out with bathwater in IMPRI insights.

YouTube: Watch A. Amarender Reddy as a panelist in the panel discussion on New India’s Economic Transformation and Union Budget 2022-23