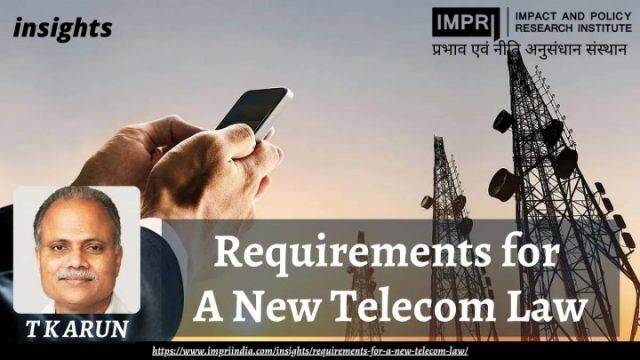 It is welcome that the government has invited comments on the consultation paper on a new telecom law. It needs lots of them.

Do we need a new law, in the first place? Is the Telegraph Act of 1885 no longer fit for purpose, after having served to regulate and develop wired and wireless communications from the nineteenth century till today? The law’s expansive definition of telegraph to include wireless communication by radio waves is what has enabled it to outlive what most people understand by telegraph — India’s last telegram was sent in 2013 — and govern telecom, instead.

Still, it is probably time to change the law: we don’t want to give would-be foreign investors the notion that our rules and attitudes to the digital economy are a trifle old-fashioned. After all, we would not call a new law to protect flightless birds the Dodo Protection Act.

The consultation paper is right to suggest that the new law should be neutral to technology, operator and business model. However, the stipulation that “the Central Government may permit the sharing, trading, leasing and surrender of spectrum assigned, subject to prescribed terms and conditions” assumes that chunks of spectrum would continue to be assigned to operators and precludes business models in which no operator is assigned a dedicated bandwidth.

Telecom is being integrated into all kinds of businesses as essential infrastructure. Indian IT-services companies are virtually recession-proof because every business and every company that wants to thrive in that business are moving to the Cloud, and need a reliable, low-cost helping hand for the move. It means that, instead of deploying a company’s data, as well as the software to make use of that data, in the enterprise’s own servers, these are being shifted to giant server farms run by companies such as Amazon, Microsoft and Google. When a company employee retrieves data, he uses telecom, including, probably, some wireless communications.

If you save the draft you have just typed out in OneDrive or Google Drive, you make use of the Cloud and use telecom just to produce a document. Quite apart from the shift towards video and, further, towards video in high-definition, as the generic form of content consumed on the Internet, the demand for data-heavy communication, and for the spectrum to enable that, will multiply manifold.

Assigning an operator a dedicated chunk of spectrum, which no other operator would be able to touch, even when the assignee has no use for it, is an inefficient way to utilise scarce spectrum. Ideally, spectrum should remain in a common pool that any licensed telecom operator would be able to access, pay for, and utilise for an authorised communication transaction. That way, every hertz of spectrum would be optimally used, operators would be spared upfront capital costs in buying up spectrum in auctions, and the service, availed of by the end-consumer, rid of the cost of sunk capital on spectrum acquisition.

Can equipment operate at any available frequency? In today’s world of MIMO (Massive Input-Massive Output), cognitive radio and software-defined radio, equipment no longer needs to operate on a pre-determined frequency. Spectrum hopping is eminently feasible.  To light a fire, you do not need to understand the chemistry and thermodynamics at play when you strike a match. You just need to be able to strike that match.

Will this lose the government revenue? A steady stream of revenue from spectrum that powers more business because of optimal utilisation should add up, over time, to more than what auctions yield. Still, if the government wants money upfront, it can ask private equity, pension funds or exchange-traded funds that invest in infrastructure to bid for pools of spectrum they would be free to trade and lease for as short or as long a period as they like to licensed operators. These spectrum pools would then get a steady stream of revenue from what telecom operators pay, on a pay-as-you-go basis.

Pebbles to Sort Out

Telecom becomes a generic enabler in assorted sectors that call for regulation in their own turfs. Take remote surgery. Doctors in Rio de Janeiro recently separated two-year-old twins with conjoined brains, in collaboration with experts in London, using virtual reality. Suppose things had gone wrong. How would insurance apportion the blame among telecom, software, equipment and surgeons? What regulatory provision would allow cooperation among medical, telecom and insurance regulators?

Driverless cars would pose similar challenges. Telecom, software and equipment must work in unison for flawless operations. Sectoral regulators would need to coordinate and cooperate among themselves. Satellite broadband would demand coordination with space regulation and regulators in other countries.

This means that insolvency and mergers can be left to their regulators, subject to business continuity requirements, without the telecom law seeking exclusive carve-outs. Telecom law must provide for multifaceted cooperation with interfacing regulators.

This article was first published in The Sanjaya Report as For A New Telecom Law.

Read another article by TK Arun- Politics of Freebies: The Government Ultimately Has To Pay for Free Lunches in IMPRI insights.