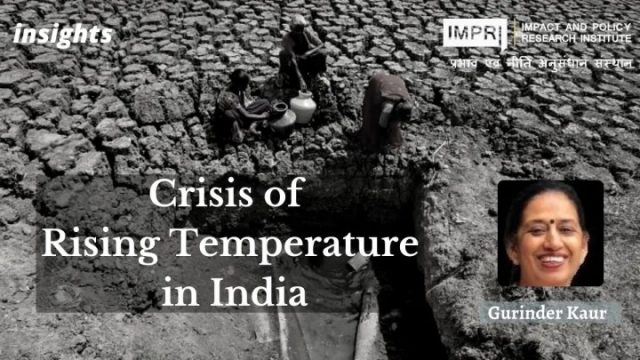 The recently released second installment of the sixth report of the IPCC (Intergovernmental Panel on Climate Change), “Climate Change 2022: Impacts, Adaptation, and Vulnerability” details the adverse effects of global warming on the world. Nearly half of the world’s population now lives in areas vulnerable to climate change, and many ecosystems have reached a point where their return is impossible.

According to the report, the rising temperature will have a devastating effect on biodiversity. Many species of animals and plants will become extinct. Rising temperature, melting of polar ice caps, and glaciers will raise sea levels, affecting coastal populations and forcing them to relocate. The incidents of all kinds of natural disasters are expected to increase manifold. Worryingly, each natural disaster has multiple impacts.

Rising temperature increases the incidence of floods and landslides due to heatwaves, droughts and wildfires, and short-term rainfall. Floods, droughts, and heavy rains damaged crops, which in turn reduced yields, resulting in lower household incomes as well as food shortages. Shortage of foodgrains will lead to an increase in food prices which will be out of reach of the poor which in turn will lead to an increase in malnutrition and still increase the number of deaths due to starvation.

The UN Secretary-General Antonio Guterres has pointed out that according to meteorologists, scientists, and planners, the report reveals the worst effects of climate change so far. According to the UN Secretary-General Antonio Guterres, the report has revealed that economic and social inequalities are also responsible for the rise in temperature. Although the developed and rich countries are responsible for the rise in temperature, the worst hit is the poorer and developing countries.

Countries in South Asia, Central and South Africa, South America, and small islands are more affected by climate change than developed countries. Among the Asian cities, the city of Ahmedabad in Gujarat faces the threat of Urban Heat Island (higher temperature in urban areas than the surrounding areas) and the city of Mumbai in Maharashtra with rising sea levels, the report said. The dangers of disasters and floods will increase. In addition, India’s Ganges and Indus rivers, along with other rivers in Asia, will face severe water shortages by 2050.

According to the report, the rise in temperature is expected to have a devastating effect on India. India is an agriculturally dominant economy and an overpopulated country. An increase in temperature of 1 to 4 degrees Celsius could reduce paddy production by 10 to 30 percent and maize production by 25 to 70 percent, leading to food shortages in India.

Our country is already grappling with the problem of malnutrition. According to the National Family Health Survey-5(2019-20), the rate of malnutrition in the country is higher than that of the National Family Health Survey-4(2015-2016), and in 2021, India was ranked 101st out of 116 countries in the Hunger Rankings by Concern Worldwide and Welthungerhife and also lags behind its smaller neighboring countries Myanmar (71st), Nepal (76th), Bangladesh (76th) and Pakistan (92nd).

The report reveals that rising sea levels are estimated to cause a loss of about — 49-50 billion dollars to Mumbai alone.  The 5th IPCC report, released in 2014, also specifically warned that India and China would be more affected by climate change than any other country.

According to a report released in December 2020 by the Council on Energy, Environment, and Water, 75 percent of India’s districts are prone to natural disasters (floods, droughts, short-term rainfall, heat and cold waves, and the like). These districts cover half of India’s population (638 million).

According to the report, the incidence of heavy rains, cloudbursts, hailstorms, and landslides in India has increased 20-fold, flood incidence 8-fold, and drought incidence 18-fold in the last five decades. The report by the Council on Energy, Environment, and Water found shocking developments in 40 percent of the districts of the country such as flood-prone areas becoming drought-prone and vice-versa.

There are a number of reasons why India is being hit hard by climate change due to rising temperatures. India’s geographical location and its pro-corporate economic policies are deepening the scourge of natural disasters. About 60 percent of India’s territory is prone to earthquakes, 12 percent is affected by floods, 8 percent is prone to cyclones and 68 percent is prone to drought.

The geographical location of India is such that it is affected by all kinds of natural calamities. To the north of the country are the world’s highest snow-capped Himalayan mountains, also called the Third Pole due to the abundance of snow, and to the south is the sea on three sides. On the basis of geographical features, the country is divided into four regions: (1) the Himalayan mountains, (2) the northern plains, (3) the central plateau region, and (4) the coastal region. All the regions are being affected differently by climate change.

Climate change is affecting all the states located in Himalayan mountainous areas. A research study by Madhav and Tewari has revealed that the average temperature in India has risen by 0.4 degrees Celsius in the last century. According to a study published in December 2021 by the University of Leeds, London, glaciers in the Himalayas have been melting at least ten times faster than average over the past few decades. Rising temperature has caused glaciers to melt and form glacier lakes, which can also cause flash floods in mountainous areas. These floods hit the mountainous states of Uttarakhand, Himachal Pradesh, and some others every year.

In the summer, when the snow melts rapidly due to rising temperature, the water floods the northern plains and wreaks havoc. That is why the states in the northern plains of our country (Uttar Pradesh, Bihar, Jharkhand, and West Bengal) are hit hard by floods every year.

Thus, melting glaciers due to rising temperature, flooding the plains will cause severe crop damage, resulting in reduced agricultural production and food shortages, and in a country like India with a population of over 135 million, there may be a food crisis. In addition, all the rivers of northern India, including the Ganges, have their origin in the Himalayan glaciers. With the rapid melting of glaciers, these rivers will dry up and the country will face water scarcity.

The southern part of the country is surrounded by sea on three sides. Sea levels in the coastal region are rising rapidly as the temperature rises. According to the Indian National Center for Ocean Information Service, Hyderabad, the sea level in the coastal areas of India is rising at an average rate of 1.6—1.7 mm per year but the rate of rising sea level is not the same in all the coastal areas.

These states are home to 40 percent of the country’s population which will be affected by rising sea levels. According to a study by the University of Oregon, the Indian Ocean is warming faster than those other oceans. As the temperature of the oceans rises, the number of hurricanes and their intensity increase manifold.

First of all, we need to take action at the national level. The temperature in the mountainous region of the country is rising faster than in other areas due to which glaciers are melting rapidly causing floods in a number of states. Therefore, non-essential constructions in the name of economic development in hilly areas should be banned.

Multi-purpose projects on rivers in the states of Uttarakhand and Himachal Pradesh should be built according to the capacity of rivers and hilly areas. Roads and tunnels in mountainous areas should be widened in such a way so as not to have any negative impact on the environment there. To protect the coastal region from the effects of global warming, the union and state governments should not destroy the natural wetlands and vegetation by enacting new laws in the name of economic development.

To reduce greenhouse gas emissions, there should be a ceiling on the number of private cars and the means of public transport should be streamlined. In addition to increasing the forest cover in the country, deforestation should be completely banned. Urgent efforts should be made to increase reliance on renewable sources of energy instead of coal power generation. India should fulfill the promises made at the international level to reduce greenhouse gas emissions.