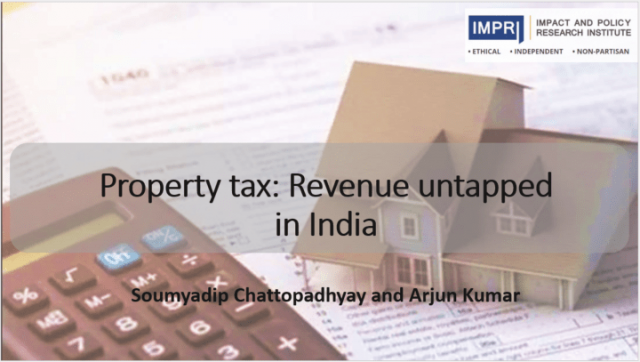 Property tax, levied on ownership of any real property, is a significant source of revenue for city-level municipal governments in India. However, revenue collections from it are quite low as it is poorly administered. Chattopadhyay and Kumar argue that apart from improving valuation technique and expanding tax base, efficient tax collection and management are essential to strategizing a property tax reform.

Cities in India are constrained by limited municipal revenues and resources to undertake necessary public investments for providing urban infrastructure and services on a sustainable basis. This comes in the way of harnessing their potential as critical drivers of economic growth and development, despite the 74th Constitutional Amendment Act, 1992 for statutory provision for urban administration and subsequent reform measures introduced to empower cities.

The problem of municipal revenue deficit can be addressed through the following steps: (a) increasing revenue from existing local taxes, and (b) strengthening the revenue-raising power of the city-level municipal governments or urban local bodies (ULBs) by broadening the sources of revenue base. A sound and robust financial health of the ULBs, then, would make them attractive before the private investors, and help them to explore other innovative sources of financing.

Property tax (PT), also known as house tax, levied on ownership of any real property (building and land) within the municipal area by the respective ULBs (empowered by state legislation), is a significant source of revenue for the ULBs. It is envisaged for the primary purpose of development and maintenance of urban areas. The importance of PT has become pertinent especially after demonetization, and implementation of Goods and Services Tax (GST), and Real Estate Regulation and Development Act (RERA).

However, the revenue collections from PT are significantly low. At present, revenues from PT roughly constitute 0.2% of the gross domestic product (GDP) in India, while in case of the developed countries, like Canada and US, it contributes up to 3 to 4% of their GDP. Even a modest increase in revenue from PT systems can help ULBs expand their municipal taxes to a large extent, which could enhance their developmental activities.

PT is poorly administered in Indian cities, and its potential has not been harnessed. Poor assessment of properties, inefficient collection, and widespread exemptions have undermined the revenue potential of PT. Until recently, in most of the Indian cities, properties have been valued on the basis of ‘Annual Rental Value’ (ARV), defined as gross annual value rent at which property may ‘reasonably’ be expected to be rented.

Owing to the use of discretionary and corrupt practices, prevailing tax rates of properties for PT, hardly correspond to their actual market value and yields very little tax revenue. Wide prevalence of Rent Control Act has capped potential rent increases to a maximum of 25% of the 1948 rents, and has also provided original tenants the right to pass property onto their heirs, preventing any future increases in rent.

Understandably, for a similar size of house, the amount of PT in Indian cities cannot be even close to hundred US dollars, whereas, in any developed country, it would be over thousands of dollars. Leaving aside the chronic problem of under assessment, the deficiency in tax management is also pronounced in the area of tax collection.

ULBs, generally, do not have any system in place to count the actual number of taxable properties under their jurisdiction, or carry out the much-required reforms and technological upgradation to realize its potential. The much-touted Smart Cities Mission of the government has also not been able to move the ULBs to bring the required smartness in the necessary systems for their essential functioning.

On average, only 37% of the tax demanded is collected, with the corresponding figures being as low as 55% for a city like Mumbai (Collier et al. 2018, Chattopadhyay 2015). In spite of the penal provision for delayed payments or non-payments, ULBs rarely undertake any penal action against the defaulters, highlighting the role of local political economy, and lackadaisical nature of commitment.

Further, exempted properties in India constitute approximately 10% of the total urban properties, and about 11% of the assessed properties. In recent years, many ULBs have started rolling out several incremental reforms, incentives, and aggressive communication using information technology to expand the collection potential of PT.

Interestingly, PT has generally been characterized as the ‘tax everyone loves to hate’ because its visibility makes people particularly aware of it, and therefore, any reform initiatives entail significant local political challenges and administrative difficulties. Primarily, PT reforms involve four key areas of intervention, and they are: broadening of tax base, assessing the property valuation, setting the tax rate, and collecting the taxes.

Experiences from across the developing cities suggest that a well-functioning tax system applies a low tax rate across a broad tax base. Up-to-date information on characteristics of land and properties are required for taking the difficult decisions of what to tax, whom to make liable for this taxation, and what to exempt from taxation. ULBs, presumably endowed with local knowledge of land and property use, are best placed on developing such physical cadaster (comprehensive land record).

Harmonizing the existing records of property with other sources of information on properties (for example, data from utility companies, records from departments such as revenue department), digitizing these dynamic databases, and periodically updating them, can be useful for bringing higher number of properties under the tax net, as well as in efficiently managing the developmental activities upon its use. Serious rethinking on exemptions to PT systems is required to minimize the revenue loss.

Sometimes, exemptions are justified for providing tax incentives to attract businesses. However, such incentives, as evident from the US cities’ experiences, may turn out to be counterproductive with a deterioration of the tax base and financial health of the ULBs, which in turn results in lower levels of urban service delivery (Slack and Bird 2015).

Two distinct assessment methodologies, as practiced in Indian cities, value-based assessment and area-based assessment1 (with the former being divided into rental2 and capital value3 approaches) have failed to capture the real value of properties. Non-availability of extensive data on market transactions of properties (or the corresponding from revenue departments) makes the valuation under capital value approach inaccurate.

Assessment of rental value based on current use (actual rents paid) rather than the highest and best use coupled with wide use of rent controls also reduces the efficacy of the rental value approaches. Cities like Bangalore, Chennai, Hyderabad, Indore, Kolkata, Patna, and Pune have introduced Self-Assessment System (SAS) as a reform measure.

In this system, the rental values of the properties are determined based on the property information provided by the owners themselves. Self-assessment is genuinely an appealing procedure for Indian cities with little administrative capacity.

However, possibility of underestimation with generally lesser incidence of the same among the lower-valued properties compared to the higher-valued properties could produce significant revenue losses. Fair initial assessment and periodic re-evaluation of properties reflecting changes in value could be useful for addressing inelasticity in the PT.

Regarding the rate of PT, most ULBs have followed a progressive rate structure. In contrast, Bangalore and Ludhiana have tried a flat tax rate, where rates are different for residential and non-residential units, and they are lower for owner-occupied as compared to rented houses.

Differential tax rates might increase the complexity of the tax system as well as administrative costs of their implementation. Given the low administrative capacity of the ULBs, a single rate may be the best option for policymakers. It is crucial to allow the ULBs to set the tax rate as that would make them accountable for tax decisions at the municipal level, leading to the improvement of municipal services with accountability and transparency.

Such PT reforms may result in major tax shifts. Attendant political resistance and public resentment can be mitigated by strengthening the linkages between local taxes and local expenditures on service delivery, and involving citizens at each stage of the design and implementation of municipal tax policy processes. ‘Phase-in mechanism’ in which tax changes are phased in over several years along with improved services can also be used to make the tax reform acceptable and sustainable.

Instead of tax rebate, tax deferral schemes, that defers the tax increases until the property is passed to someone else, can also be used to help those people who are asset rich but income poor. Due attention should be paid to reduce the tax liability on low-income taxpayers by rationalizing exemptions, for example, by lowering the assessed value of owner-occupied principal residences and prescribing a service charge as a fixed percentage of assessed value, or by providing targeted assistance to low-income and elderly residents whose taxes exceed a certain percentage of their income.

Equally important is an effective grievance redressal mechanism to clear doubts of the taxpayers and solve their problems within a specified time limit with the use of technology.Apart from improving the valuation or expanding the tax base, efficient and effective tax collection and management are essential to strategize the PT reform. Complete digitization of property records, usage of insights from the evidence generated, billing and payment system including introduction of new modes of tax payments could surely improve the efficiency in tax collection. Increasing tax compliance also requires identification of tax defaulters and initiation of penal actions against them regularly.

Effective implementation of measures like imposition of fine as a percentage of the tax due, publication of defaulters’ lists, combining tax liabilities with utility payments, prohibiting sale of properties or withholding permission of development without up-to-date tax payment, providing discounts to the taxpayers for timely payments of PT, and so on, are likely to enhance tax compliance. It is also important to sensitize people about PT payments by showcasing the various costs and benefits of compliance and/or non-compliance to tax regime.

Government of India’s push on urbanization, and infusing a spirit of competitiveness among cities through various programs (Smart Cities Mission, Atal Mission for Rejuvenation and Urban Transformation, Heritage City Development and Augmentation Yojana), rankings (Swacch Survekshan, Ease of Living Index, etc.) and ratings (credit ratings of ULBs, other performance standards), should also prioritize the empowerment of ULBs. Focus should be on their capacity development, and on enhancing their performance to harness the potential of PT as one of their primary sources of revenue.

In essence, the success of any property tax reform measure lies in garnering sufficient and sustained public and political support at local levels. This needs to be supplemented by encouraging accountability and transparency of the ULBs to their citizens through their functional and fiscal empowerment.

First published in the wire Tapping the revenue potential of property tax in India on October 23, 2019.

Also written by the authors Streamlining to energize the sluggish real estate sector at IMPRI Insights.