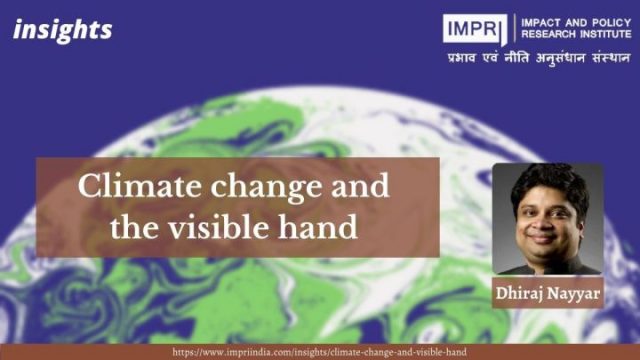 The key to success in mitigating climate change is the emergence of new technology. But technology needs to be commercially viable, or it will fail.

The one thing that is apparent after the latest global climate summit, COP26 at Glasgow, is that business as usual is not going to contain global temperature rise to either 1.5 or 2 degrees Celsius, above which potentially catastrophic outcomes for the planet become greatly magnified. Nor will announced pledges help meet the target. Disruption is required. But who will bring about the disruption, government or market forces?

For emerging economies like India, that choice could determine not just outcomes on climate but also the speed of their economic rise. Economics 101 would tell you that climate change is a classic example of negative externality, public “bad” and market failure because no individual (person or firm) bears the full cost of their carbon-emitting actions; society does. It is an apt case for government intervention.

If any further evidence is required that a solution to climate change cannot be left to individual economic actors, or even individual nations, the apparent failure of governments to agree on ambitious enough plan at COP26 is a textbook example of collective action problems, where cooperation could lead to a superior outcome, but individual interests do not allow it. In theory then, climate change could open the door for a much large role for the State in economic activity, either nationally or supranational.

However, there are reasons to be wary of the heavy hand of government. Even if intentions are good, bureaucrats are not competent to micromanage the pathway towards the set targets. India’s long economic history after Independence and the failure to achieve best laid plans tell us that. Should bureaucrats decide by diktat a date and time for the phasing down of coal? Can they do so without causing damaging disruptions in an economy where the pace of energy transition is still uncertain?

Can the government announce a date and time for all vehicles to turn electric without an ensuing chaos of inadequate infrastructure to support an all-EV country? The phasing down of coal and of internal combustion engines are noble climate goals, and can certainly be hastened by government action, but at what cost to the economy?

India has already lost the first two years of this decade to the pandemic. The logic of restraint on the part of the Government extends beyond diktats. It applies to fiscal policy. Intuitively, it may make sense to give incentives to renewable energy but what if that creates an over capacity? The storage and transmission infrastructure, and the distribution companies, need to be in a position to absorb the production.

Equally, it may seem sensible to impose carbon taxes on the production of fossil fuels but with the pace of the energy transition likely to be slow, and India’s dependence on imports of oil, gas and coal only increasing, can the country afford to disincetivise more production without disrupting economic activity? Fortunately, there is emerging evidence that market forces may be willing and able to facilitate the climate transition with the light hand of the State providing over-arching targets and financial support.

Globally, equity investors, particularly large institutional investors, are already rewarding firms that commit to ambitious climate goals. In the debt market, green bond and sustainability-linked bond issues are growing impressively, even in India. Again, investors are rewarding firms with interest rates which are lower by 3-4 percentage points than regular bonds. These trends may be recent and nascent but if finance is more readily and cheaply available to those who adhere to climate goals then more firms will move in that direction.

Of course, markets will also continue to finance firms which have longer term horizons for transition, because they know the transition will take time and returns can be earned from different types of investment. In short, markets may achieve a balance. The key to success in mitigating climate change is the emergence of new technology. But technology needs to be commercially viable, or it will fail. Think of the Concorde aircraft which provided twice the speed of travel but wasn’t economically viable.

Government has an important role to play in the development of technology, particularly in terms of finance but it is not the best judge of when a technology is ready for market. Commercial viability and adoption are best determined by the forces of demand and supply.

Markets are not perfect, but they are better gatherers and assimilators of information than governments. They also have self-correction mechanisms. Climate mitigation is doubly hard for countries like India which are also trying to become prosperous. The heavy hand of the State is not likely to be helpful.

First Published in the Sunday Guardian Live titled Climate change and the visible hand on November 27, 2021.