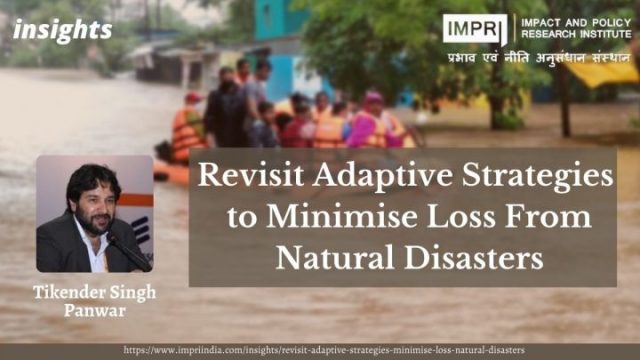 (In the 20th century, there were 402 extreme events, whereas from 2000 to 2021 there have been 354 events of natural disasters in India with still eight decades to complete the 21st century. In such a situation, it is pertinent to revisit the strategies of development.)

“Forty-four dead, 16 missing after heavy rains in Andhra Pradesh,” is a flash from a news item in one of the channels, Saturday, November 27, 2021. But this is not an isolated incident. In fact, if the year 2021 is taken into consideration, there has been a loss of lives and assets right from the North to South and East to West.

Flooding in Dharamshala, Kinnaur in Himachal Pradesh, flooding in Patna, Delhi, Gurgaon, landslides in Uttarakhand and Kullu in Himachal Pradesh, recent flooding in Chennai and Bangalore are all reminders of a continuous challenge that is being faced across the country. Kerala is now having rains for almost nine months a year. Flooding has become a regular feature in this state.

The extreme weather events which used to take place once in a few decades are now happening more frequently. The impact of climate change is more than evident. After US and China, India is at a third position as far as natural disasters vulnerability is concerned.

According to a study undertaken by a research group of the State Bank of India, there were 756 instances of natural disasters that include landslide, storm, earthquake, flood, drought etc, since 1900. From 1900 to 2000, in the 20th century, there were 402 extreme events, whereas from 2000 to 2021 in the 21st century there have been 354 events of natural disasters in India. Still, eight decades to complete the century. One can estimate the massive disasters in the offing for the years to come.

Interestingly the SBI report, instead of focusing on mitigation and adaptive strategies, relies more on insurance-based models of meeting the challenges of natural disasters. In India nearly 8% of the total losses are covered under insurance, leaving 92 % of the people behind. But insurance cannot be the sole mode of adapting to the impending crisis of natural disasters in the country, especially in the urban centres.

Since it is established that extreme weather events are going to affect the Indian sub-continent more, it is pertinent to revisit the strategies of development. Natural disasters affect people beyond their geographical boundaries. However, urban India where the inequity is pernicious and the people are more vulnerable to living and live in high density, are the worst sufferers.

Unfortunately, the mitigation and adaptive strategies adopted by the government through the National Platform of Disaster Risk Reduction are lacking both in vision and effective implementation.

The development strategies of city building are too project-oriented and one of the reasons for urban flooding in most of the cities in the recent past has been because of infrastructure development. Especially, the cities that are qualified under the smart city mission of union government are the worst performers.

Why? Because in these cities, apparently in most of the smart cities, the works undertaken are for re-development. There are three components under the smart city mission for infrastructure development called ‘area-based development’(ABD). Pan-city development is done keeping in view the role of artificial intelligence – more on the ‘internet of things’.

Under the ABD, as mentioned there are three components: retrofitting, redevelopment and greenfield projects. There is hardly any city that has opted for a greenfield project owing to the large spaces of land required for such a developmental model to be unleashed. Likewise, only a few opted for retrofitting as a priority. Most of the cities have opted for the redevelopment of the city. In this most of the infrastructure projects are unleashed and the natural flow of water is disturbed through these projects.

Take for example two cities: Patna and Bangalore. In Patna under the smart city project construction of flyovers and other infrastructure projects were undertaken. However, the drains that require regular clearance got dumped with muck and the pumps were not functioning at all. The entire drainage system collapsed. Instead of improving the drainage system, the money is spent to build flyovers which further precipitates the problem. This happened despite the fact that the Ganges flowing through the city was at a low ebb.

Likewise, Bangalore, another city on the smart city bandwagon has gone for massive construction projects and have squeezed the natural spaces of lakes. This spelt disaster in the recent rains and some of the areas where these construction activities have taken place were completely inundated.

Secondly, the clarity of authority in the cities must be specified. This should be clearly mentioned in the disaster plans. There is clarity at the national and state levels, but not at the city level. For example, the National Disaster Management Plan is headed by the prime minister, at the state level SDMA is chaired by the chief minister, but at the city level instead of the mayor of the city, the DDMA i.e., the district disaster management plan of action is ratified and a bureaucrat, in most cases the deputy commissioner takes the call for action. This must change and cities disaster management plans must be steered by the mayor and the council of the city with onus.

Both city development and city governance must be the two core areas to be addressed to ensure that the city and the city residents are best adapted to meet such disasters, which are bound to increase in the future.