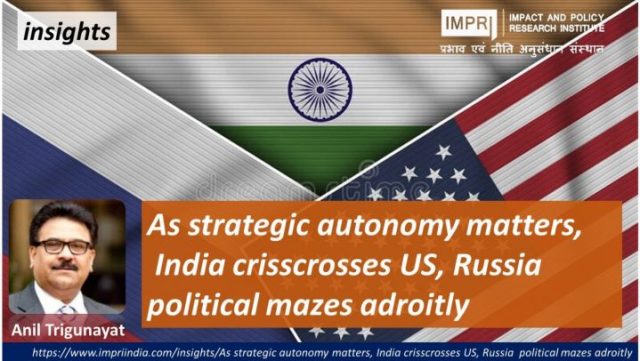 The Democracy Summit called by President Joe Biden on December 9-10 has been his favourite project. It was possibly delayed as the US itself during the transition from Trump to Biden had seen the worst side of it.

Many observers doubted that the US, which overseas even used democracy projects to engineer regime change, had lost the moral authority to claim that leadership. Hence, the Summit can be termed as Washington’s quest to resurrect its image. The selection criterion of the countries invited has also led to criticism and frustration from different quarters which often decry it as another unilateral US effort to divide the world.

India as the largest democracy in the world had to be there by default. But from South Asia, they chose Pakistan and Nepal and excluded Bangladesh. The Russian Foreign Ministry called it as a “part of the US’s big strategy to undermine the role of the UN and build, beyond the universal formats (primarily based on G7 and NATO) a coalition of allies essentially, US satellites.”

Even the Chinese Foreign Minister Wang Yi in his discussion with Iranian counterpart reiterated their opposition to external and unilateral interventions in internal affairs.

India has adroitly steered her foreign policy through the maze of Cold War confrontations following its non-aligned or selective alignment policies to best serve her national interest. It was able to benefit from both camps.

The same applies today as India continues to have an aversion to alliance systems and structures which tend to undermine her ability to exercise legitimate choices. Hence, it exercises “Strategic Autonomy ” as a preferred valued principle, tool and anchor of her foreign policy. Broadly strategic autonomy is non-alignment by any other name in the current times when Washington continues to treat Moscow as its biggest threat.

Both the big powers did not like the Indian approach clearly documented. Some would argue that by following this India may have lost on having a dependable and supportive superpower on her side. But then in the diplomatic discourse entering into strategic partnerships and minilaterals and issue based alignments serve the same purpose.

New equations are evolving as the confrontation and competition for strategic geopolitical space and techno-economic superiority takes the frontage in the real politics between major powers.

The Indian establishment realizes that its biggest challenge in its immediate and extended neighborhood is going to be Beijing’s hegemonistic aggressive approaches despite Delhi following dialogue over dispute and competition with cooperation matrix which now are accentuated more by mistrust and elements of confrontation over collaboration.

It will remain a ‘COC’ country of concern. Foreign Minister Dr S Jaishankar has rightly pointed at the crux of the problem with Beijing as a “rough patch” and that the two are at crossroads. Speaking at the recent SCO Council of Heads of Government meet, Foreign Minister Jaishankar re-emphasized that “connectivity initiative must be consultative, transparent and participatory. It must conform to the basic principle of international law –respect for sovereignty and territorial integrity.”

Earlier, he had also spoken of 3Ms for the relationship to move on a positive trajectory i.e. mutual respect, mutual sensitivity and mutual interests. Hence, the dragon will figure in all its strategic equations with other countries including US and Russia and their own relationship with Beijing.

The US and India have often claimed to be natural partners being the oldest and the largest democracies and standing for the implicit principles. They have both emerged into Global comprehensive strategic partners as the Cold war 1.0 ended and strategic equations changed.

Today engagement with the US across the strategic spectrum has deepened and increased manifold as its pivot to Asia with India as the fulcrum with Indo-Pacific as the new frontier has been established with potential of Sino-US turning the levers for Cold War 2.0 with a difference.

Even the US is trying to work on a strategy as to how deal with a rising China especially as it sees a Sino-Russian axis emerging even stronger.

It takes recourse to instruments of sanctions like Countering American Adversaries Through Sanctions Act (CAATSA) to dissuade India and others from continuing with the high value defence purchases like S-400 air defence system which is on its way to be installed.

As India is going ahead with the purchase of the S-400 air defence system, it speaks volumes of its resolve to maintain her strategic autonomy and avowed friendships rather than succumb to pressure coming from geo political and geo economic considerations.

While we may disavow the unilateral sanctions, the hard fact remains that hyper power and the current economic system tend to hurt you in the bargain. Iran is a case in point. However, recently after his meeting the Indian Commerce Minister Piyush Goyal claimed that a lot of baggage of the past was erased during the recent visit of USTR Catherine Tai.

The US has often extended waivers to India on oil imports and hopefully they will go in a wrong direction this time as well. Kill the goose or enjoy the eggs.

An uncertain situation does indeed provide India with a leeway to exercise her issue based choices. Therefore, India’s crisscrossing plurilateral arrangements from QUAD (with US, Japan and Australia) to BRICS (India chairs this year), RIC (Russia, India and China) passed on the baton to China only this week) and SCO with Russia and China and the G20 with all the three superpowers provide it with a cushion and an operational flexibility to serve her own national interests as she strives to acquire the requisite heft to ensure that she indeed becomes Atmanirbhar ( self –reliant) in true sense.

Until then dependency is a vulnerability. As for Russia, it is India’s trusted and dependable friend.The relationship has evolved into a truly special and privileged strategic partnership with stakes in civil nuclear, defence, space, trade and economy to diamonds and hydrocarbons.

For this, credit has to go to President Putin a great deal as he singularly stood for enriching the ties with New Delhi despite their closeness to Beijing and not being able to appreciate India’s stance on the Indo-Pacific or for that matter continued proximity to Washington.

However, as he will be visiting for the 21st leadership Summit with PM Modi on December 6 both sides will discuss a range of bilateral collaboration possibilities, regional and global challenges.

2+2 format meeting between foreign and defence ministers will also be held to review the gamut of far reaching developments. Russia wishes India to play a greater role in its own Far East where India had extended a $1bn line of credit to do just. This needs to be speeded up with well thought out time bound projects.

This will be President Putin’s second external visit during the pandemic after the one to Geneva to meet President Joe Biden. Chennai to Vladivostok corridor and a potential Japan-Russia–India trilateral could obviate the trust deficit on the prevailing Indo-Pacific syndrome.

Moscow also needs to appreciate India’s concerns and sensitivities in a realistic manner especially in the regional context. India needs to acknowledge that be it US, China or Russia they only respect you when you speak from the position of strength. India‘s strength lies in her growing economy, market size and global goodwill which needs to be leveraged to her own advantage with the competing powers for the pie.

It would not be out of place to evolve a defensive India specific CAATSA to counter the extraneous interventions by other countries for whom strategic partnership is a one way street.

Read another piece on Quad titled “Trigs on Track- Diplomacy Unwound-AUKUS – The QUAD and the Malabar” in IMPRI insights.

Read another piece on Indo – Pacific titled “Trigs on Track- Diplomacy Unwound-AUKUS – The QUAD and the Malabar” In IMPRI insights.

Read another piece on Syria ” India Needs to Become a Player in Syria’s Transition and Reconstruction ” in IMPRI insights.