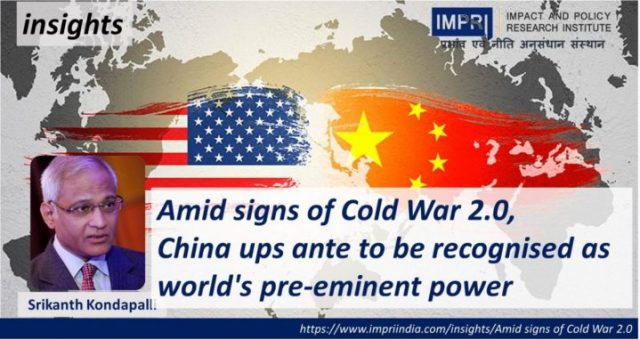 That Joe Biden needed more time to fix the domestic situation in the US is clearly exploited by Xi Jinping, who is trying to gain more strength in the South China Sea, Taiwan Straits and other areas of the Indo-Pacific.

The seemingly uneventful Joe Biden-Xi Jinping meeting last fortnight exposed the two diametrically opposite positions, raising concerns on increasing destabilising portends to the regional and global orders in the coming months and years. Beijing is clearly upping the ante to be recognised as the pre-eminent power in the world.

United States president Joseph Biden and China’s president Xi Jinping met virtually on 15 November 2021. The meeting lasted nearly four hours. Both had a phone call in February and September, with Xi delaying recognition of the new US President after elections. Unlike in the Trump administration before when Xi queued up to meet the US president at Mar-o-Lago in 2017, this time around Biden scrambled for the meeting.

Biden flagged the red lines by stating that he “will continue to stand up for its interests and values and, together with our allies and partners, ensure the rules of the road for the 21st Century advance an international system that is free, open, and fair”. He also suggested that “the need for common-sense guardrails to ensure that competition does not veer into conflict and to keep lines of communication open”.

In contrast, Xi offered the time tested “united front” tactics to the US when he stated: “China and the United States should respect each other, coexist in peace, and pursue win-win cooperation. I stand ready to work with you, Mr President, to build consensus, take active steps, and move China-US relations forward in a positive direction.”

As two largest economies in the world, it is natural that the US and China would rub shoulders on multiple fronts. While both have an enduring interest in maintaining the international system, specifically trade, investments and others, despite the recent decoupling trends, acute differences persist on a host of issues including regional stability, democracy, human rights violations, proliferation, energy, environment and others.

Bilateral differences were exposed during the Anchorage meeting between the national security advisors and foreign ministers in March. The Tianjin meeting between US deputy secretary Wendy Sherman and Chinese foreign minister Wang Yi in July came at the behest of the US side. John Kerry, US Special Envoy on climate change, was likewise snubbed during his Beijing visit in September by raising bilateral issues.

The US has been suggesting abiding by the “rules of the road” assiduously built since 1945 of which China was a major beneficiary both in becoming the United Nations Security Council member in 1971 and the World Trade Organisation entry in 2001 and its subsequent rise. China’s ascendancy was not possible without the US blessings and help.

Biden was insisting on cooperation and on predictable and decent competition, while avoiding conflict with China. Xi exhibited no such qualms. Xi knew president Barack Obama surrendered the South China Sea to Beijing’s assertiveness and that this time he could try taking over Taiwan as the 200-odd aircraft it flew in early October in Taiwan Straits indicated. Indeed, Xi warned Biden in the virtual meeting “not to play with fire” over the Taiwan issue.

On the other hand, despite being the beneficiary of globalisation, Xi is suggesting not to the universal rule of law but a major pie in global governance. As with the previous American administrations, Xi (and Hu Jintao before) were emphasising on cooperation and mutual communications (and not resolving conflicts), thereby lulling the US into gradual submission.

As has been its practice to utilise commercial links to promote political ties, Xi also began pressurising American businesses in China to influence the new US leadership, as his letter to former Starbucks chief Howard Schultz early this year indicated. Over 70,000 American companies, which set up shop in China, clearly are under pressure.

In a sign of the emerging Cold War 2.0, Xi took barbs at Biden by saying: “We should run our domestic affairs well!” This is with reference to the pandemic spread in the US and its mounting domestic political and economic problems, while China is conveying that it has “efficiently” addressed the epidemic spread despite letting five million go away from Wuhan in January last year.

Xi was also silent on how $1.4 trillion melted away with his recent “common prosperity” campaign after attacking fintechs, edtech and vehicle hailing apps in China or on the general slowing down of the economy. Not did Xi assure Biden on implementing the agreement reached in 2019 with the US under Trump on reducing trade deficits. China’s optics clearly at the virtual meeting is to ignore implementation of the previous agreements and mount trade deficits further on the US.

The virtual meeting exhibited more differences between the US and China. Biden mentioned “peaceful” resolution of the Taiwan issue and on the Indo-Pacific “ensuring” stability in the region. Xi did not commit to any of these, but indicated dependence on the US in hitech areas till its recently launched “dual circulation” strategy and Made in China 2025 succeeds.

That Biden needed more time to fix the domestic situation in the US is clearly exploited by Xi by pushing the Americans away from the South China Sea, Taiwan Straits and other areas of the Indo-Pacific. This is despite the US mobilisation of over 35 naval vessels since 2019 in the Taiwan Straits, which remain mainly cosmetic in nature much like the freedom of navigation operations conducted by the previous Administrations within the 12 nautical miles of the nine militarised reefs of China.

Clearly, the virtual meeting provided an opportunity to China to offer a “united front” to the US much like the Communist Party offered a similar one to the beleaguered Chiang Kai-shek in 1935. Such collaboration with the Kuomintang against the Japanese offered the communists space to regroup and grow to finally overthrow Chiang himself in 1949. While the context is different, the ominous signals from China are clear in this round of meeting.