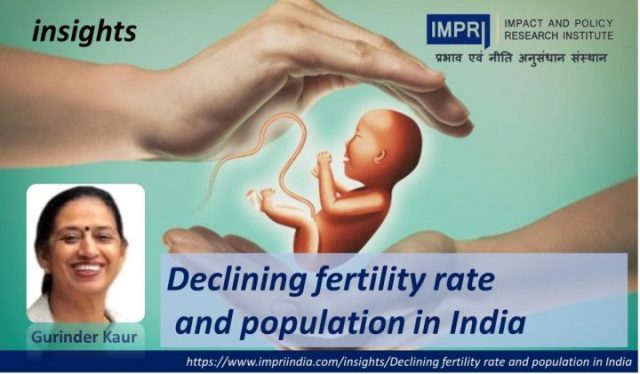 According to the National Family Health Survey—5, only five states of the country, Bihar (3.0), Meghalaya (2.9), Uttar Pradesh (2.7), Jharkhand (2.4), and Manipur (2.2) have recorded relatively high fertility rates and this is also above the replacement rate.

The World Health Organisation(WHO) describes Total Fertility Rate as the average number of children born to a woman “at the end of her reproductive period”. Replacement level fertility is the level of fertility at which a population exactly replaces itself from generation to the next. One couple replaces two children, if a couple has more than two children then it will lead to rapid population growth. With less than two children, the population will certainly increase, but at a declining rate. In Sikkim, Ladakh, Goa, Andaman & Nicobar, Lakshadweep, Jammu & Kashmir, and Chandigarh, the fertility rate is less than 1.5. Maharashtra and Rajasthan have a fertility rate of 2 which is equivalent to the national average, while in the remaining 22 states and union territories, the fertility rates range between  1.6  and 1.9.

Since the country’s independence in 1947 the problem of population growth in India has always been a matter of concern for governments. The first family planning scheme was planned in 1952. The governments of the time did not take up to  implement it out of fear of their vote bank.The then Prime Minister  Indira Gandhi launched a controversial public sterilization campaign in 1972. It did not result in  controlling  population growth, but it did a great deal of political damage to the Congress Party.

According to the United Nations’ World Population Data Sheet, 2021, India’s population will surpass that of China during 2024-28 and India will become the world’s most populous country. Although the declining fertility rate in India is a very important indicator of population growth, it may delay the time for the country to become the world’s most populous country for a few more years. Much more needs to be done to get rid of it.

According to the current survey, the reason for the decline in fertility is the use of various contraceptives. There has been a 13 percent increase in the number of people using contraceptives as compared to the National Family Health Survey-4. At present, an average of 67 percent people in the country are using contraceptives and institutional births have increased from 79 percent to 89 percent. At the same time, 76 percent of children are being vaccinated over time, which has led to a sharp decline in infant mortality.

The share of women in sterilization is higher than that of men. It has increased from 36 percent in 2015-2016 to 38 percent 2019-21. The increase in female sterilization shows that the onus remains with women. It is also important to point out that declining fertility is an important factor in controlling the population, but at the same time, infant mortality at birth or at an early age also affects population growth because child mortality rate then will affect both birth and fertility rates.

Due to lack of nutrients in the diet of children, they are not fully developed as a result of which 36 percent of children in India are not growing according to their age. At present, 67.1 percent children in the country are anemic. It is 57 percent in females and 25 percent in males. Sadly, this percentage has increased by 8.5 percent in children, 4 percent in women and 2 percent in men as compared to 2015-2016. According to the National Family Health Survey-5, the depressing message from the anemia-affected population is that 67 percent of children and 57 percent of women are suffering from anemia due to lack of nutritious food. How can such mothers and children create a golden future for the country!

Number of Females per 1000 Males

With the declining fertility rate, the percentage of children under the age of 15 in the total population is declining rapidly. According to the National Family Health Survey-1 (1992-93), the population of children under this age group was 38 per cent which has now come down to 26.5 per cent. This shows that India’s population will continue to grow at a declining rate in the near future, which will have a profound effect on the economic and social fabric of the country.

Apart from the government’s family planning programme, one of the reasons for the declining fertility rate is people’s perception of small families. Although in India, ‘the one child policy’ like China, was not imposed on the people, still has a birth rate of 1.1 to 1.9 in 29 states and union territories. This will make it easier for the government to control population growth as people move to a limited family of one child on their own. In states like Bihar, Uttar Pradesh, and Jharkhand, there is an urgent need to implement programmes like ‘Mission Parivar Vikas’ on a large scale and seriously increase the literacy rate of women in these states and make them financially independent. In this direction the government should make serious efforts. Between 40 and 45 per cent of women in these three states are still illiterate. To curb population growth, the government needs to make adequate arrangements for replenishing the nutrients in the diet of women and children. While the declining fertility rate is a good sign, more efforts are needed to bring it down as compared to  the replacement rate across all the states.

Read another piece by Gurinder Kaur titled Cyclone Tauktae: A Warning of Climate Change and Pandemic in IMPRI Insights

Read another piece by Gurinder Kaur titled A True Tribute to Sunderlal Bahuguna: Protector of Environment in IMPRI Insights

Read another piece by Gurinder Kaur titled Air Pollution: A Massacre for Delhi in IMPRI Insights

Read another piece by Gurinder Kaur titled The Biggest Crisis of the Century in IMPRI insights.