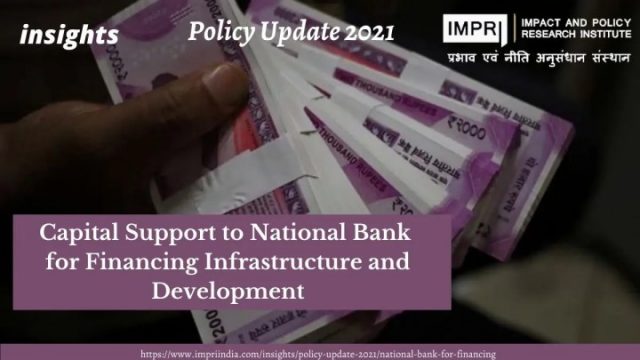 The National Bank for Financing Infrastructure and Development (NBFID) was established with an aim to support the development of long-term infrastructure financing in India such as the development of the bonds and derivatives markets so that infrastructure financing can be carried forward smoothly. The related bill, namely, The National Bank for Financing Infrastructure and Development Bill, 2021 was introduced in Lok Sabha on March 22, 2021. It was passed in Lok Sabha on the very next day and in Rajya Sabha on March 25, 2021. NBFID is expected to serve as the principal development financial institution (DFI) to cater to those segments of the economy which consist of high risks – beyond the limits accepted by other financial institutions.

At the 94th Annual General Body Meeting of FICCI, Chairman KV Kamath has stated that NBFID will start lending to infrastructure projects from the 1st quarter of the financial year 2022-2023. He also mentioned that the bank’s policies and framework were in place in just 30 days and currently appropriate technologies were being identified to extend its services to the infrastructure sector.

NBFID is said to possess both financial and developmental objectives. The former covers directly or indirectly lending, investing, and attracting investments from the private sector and institutional investors to foster sustainable economic development. The second objective includes the facilitation of the development of the market for bonds and derivatives.

After the Central Government proposed an investment of 111 lakh crore rupees in infrastructure projects until the financial year 2025, the need for such a national bank developed. In this regard, NBFID is expected to fund about 7000 projects under the National Infrastructure Pipeline (NIP). NBFID Chairman Kamath states that 3 to 4 lakh crore loans can be extended over the next three years as the Institution begins its operations. Moreover, as the Institution is outside the purview of CAG, CVC and CBI, independent and thus, faster decision-making is expected.

There are some upcoming issues with respect to technology. The entrance of technology-based new players has led to a lag and disruption in the financial services sector. Currently, people are welcoming the digital era and only some players in the financial space are able to take that to their advantage.

NBFID will begin to disburse capital from April 2022. For this purpose, the Bank requires funds and this will be secured in the form of loans or by the sale of financial instruments such as bonds and debentures. Further, it may borrow from the central government, Reserve Bank of India, scheduled commercial banks, mutual funds, and multilateral institutions. The central government, particularly, will provide grants up to 5000 crore rupees by the end of the first financial year along with a guarantee for borrowings from multilateral institutions, sovereign wealth funds, and other foreign funds. If requested by NBFID, the government may guarantee the bonds, debentures, and loans issued by it.

As per Ghosh (2003), a reduction in the interest rate premium on bonds over the deposit rate can be important for a development financial institution such as NBFID to increase its market share. It has to be noted that macroeconomic aggregates are affected by corporate access to the bond market. Policies are required to improve the information-processing capacity of bond markets to provide a conducive environment for development.

Ritheka Sundar is a Researcher at IMPRI. She is currently pursuing her Bachelor’s degree in Economics from Stella Maris College, University of Madras.