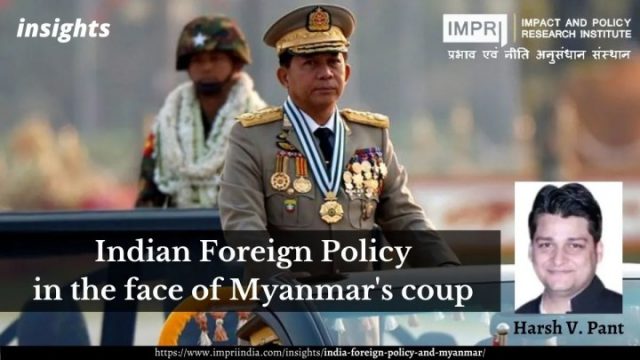 Foreign Secretary Harsh Vardhan Shringla was in Myanmar this week to assess the ground situation and to nudge various sides to seek mutually acceptable solutions to the multiple crises marring one of India’s most important neighbors. New Delhi, of course, has vital interests in Myanmar that it would like to protect and enhance.

While the West has made democracy the sole prism of its Myanmar policy, India doesn’t have that luxury. Much like most other immediate neighbors of Myanmar, India has been keen to push back against the Myanmar military’s authoritarian tendencies even as its multiple interests have ensured that it keeps its channels of communication open with all stakeholders.

Myanmar has been in turmoil since February when the military seized control of the country in a coup and detained Aung San Suu Kyi and other leaders of her National League for Democracy (NLD). India had been categorical from the very beginning that the gains made by Myanmar over the last decades on the path towards democracy should not be undermined.

Earlier this month, after Suu Kyi was sentenced to four years (later reduced to two years) in jail for provoking dissent against the military and breaching Covid-19 rules, New Delhi responded by expressing its “deep concern” over “any development that undermines these processes and accentuates differences” and expressed its hope that “keeping their nation’s future in mind, efforts would be made by all sides to advance the path of dialogue.”

But for India, challenges emanating from Myanmar and adjoining areas do not cease depending upon the complexion of the government. And direct engagement with the State Administration Council (SAC) and other stakeholders can no longer be put on hold.

Last month’s deadly attack on an Assam Rifles convoy near the Myanmar border in Manipur was a reminder about the proclivity of China for creating trouble in the Northeast, especially at a time when border tensions along the LAC remain high. The Covid-19 pandemic has also had an impact because of the porous border between India and Myanmar. For India, a humanitarian crisis as a result of the pandemic-induced economic crisis in Myanmar would be a lose-lose situation and it should be prevented with the utmost urgency.

India as the only major democratic country bordering Myanmar, should insist on demonstrable progress on the road to democratic transition, but being a neighbor, it is also aware that Myanmar has never responded well to international pressures. The role of Myanmar’s army would be key to the unfolding of any democratic transition there, so an active engagement would be needed.

Even as it continues to call for a restoration of the democratic process, both bilaterally and at various multilateral fora, New Delhi has to engage with the army in Myanmar to address Indian concerns as well as to make it a stakeholder that can deliver on the democratic front, including the release of political prisoners. Marginalizing the army will only push it into China’s arms, which only has its economic and defense interests to secure from Naypyidaw. Ever since the coup, China’s economic grip over Myanmar has only become tighter with a special focus on projects critical for the China-Myanmar Economic Corridor.

While the West continues to condemn and sanction, China is investing and pulling Myanmar into its orbit. The US has continued to use the overused threat of ever more sanctions, though to little avail. Myanmar’s army seems to have ceased bothering about the rhetoric from the West. It is the neighboring countries that have to shape the behavior of the military junta in a constructive manner.

It is not surprising that countries like Japan, South Korea and most ASEAN members have all moved forward with engaging the military junta in Myanmar. The Cambodian prime minister, the incoming chair of the ASEAN, is scheduled to visit Myanmar next month and is likely to set new terms of engagement. It is, therefore, imperative that New Delhi too reaches out and shapes its own trajectory in Myanmar.

The foreign secretary’s visit will allow him to meet the main political parties to understand their expectations from the world’s largest democracy even as he works with the military authorities to ensure that the democratic process get off the ground at the earliest. In international relations, black and white binaries never really work. The complexity of India’s regional security and neighborhood demands that India adopt a more nuanced position on Myanmar. New Delhi should not lose its essential pragmatism in engaging Myanmar.