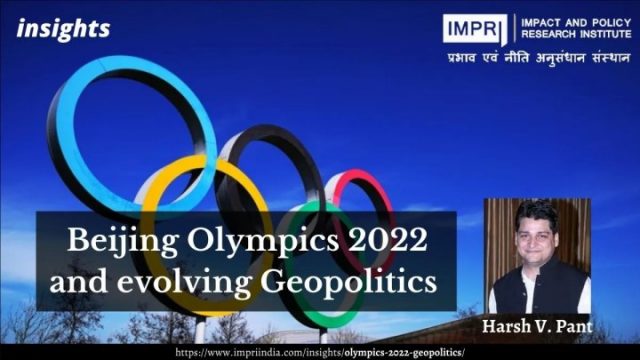 The Cold War sentiment is arising globally. This year would be remembered for solidifying the fault lines between the United States of America and China and sport, like much else, is in the cross hairs. Earlier this month, the Joe Biden administration announced that it won’t send diplomats to Beijing over concerns about China’s human rights record. The US’s diplomatic boycott of the 2022 Winter Olympics is setting the stage for the addition of another dimension to the US-China saga of widening confrontation. From Xinjiang to Hong Kong, from South China Sea to the Himalayan borders, China is challenging the West and other nations in its periphery in ways that have resulted in a serious backlash.

Washington is unanimous in viewing China as a strategic competitor with whom the areas of convergence are narrowing. And sport is the latest domain where the geopolitical contestation has spilled into. The case of the tennis player, Peng Shuai, who disappeared from public view after accusing a top Chinese government official of sexual assault, has led to global concerns. The Women’s Tennis Association has gone ahead with a boycott of China by suspending all tournaments there over the issue of Peng Shuai.

Condemning the US move, China has accused it of violating “political neutrality in sport” and threatened “resolute counter-measures”. Other nations like the United Kingdom, Canada and Australia have also joined in the boycott while China has been able to get explicit support from the Russian president, Vladimir Putin, who will be attending the opening ceremony of the Beijing Olympics and will also meet Xi Jinping. In return, Xi has supported the Russian demand for written security guarantees from NATO that it would not expand eastward and would not station weapons in Ukraine that could threaten Russia.

Interestingly, Italy and France have declined to join the boycott, with President Emmanuel Macron describing it as “insignificant and symbolic”. The European Union remains reticent in taking on China frontally although the European Parliament had called on EU governments to “decline invitations for government representatives and diplomats to attend the Beijing 2022 Winter Olympics unless the Chinese government demonstrates a verifiable improvement in the human rights situation in Hong Kong, the Xinjiang Uyghur Region, Tibet, Inner Mongolia and elsewhere in China”.

The move by the US is largely symbolic. It merely allows Washington and its allies to make a point while not going for a full boycott. For most of the world, this will hardly make a difference and China is unlikely to change any of its policies or its behavior because of a few diplomats not attending the Games.

Within the US, there is rare bipartisan support for this move, although some policymakers have called it a “half measure”, arguing that the Biden government should have opted to “fully boycott” the event. Whatever be the merits of the US approach, the 2022 Winter Olympics has become one of the most contentious Olympics in recent memory.

The legacy of the 1936 Berlin Olympics continues to shape this debate. The challenge that Xi’s revisionist reign poses to the world may yet not be in the same mould as the one posed by Adolf Hitler but the inherent dangers in not standing up to Xi’s shenanigans are becoming clearer. That’s the reason why the campaign to boycott the Beijing Olympics has gained so much traction with civil societies and nation states. China itself has been at the forefront of using sport as an instrument of political agenda: its boycott of the Melbourne Olympics in 1956 being a case in point.

Read another piece on Afghanistan titled “Amid great power competition, what Delhi and Moscow mean to each other” in IMPRI insights