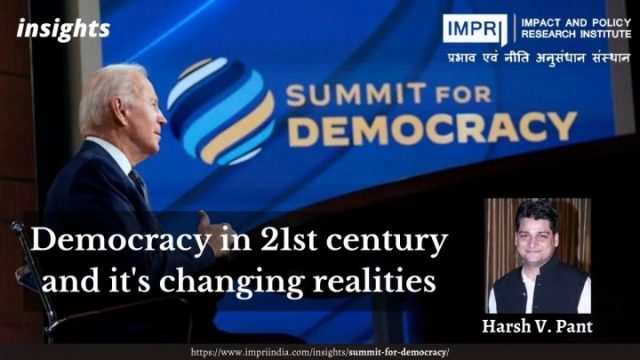 The much-touted Summit for Democracy hosted by US President Joe Biden has come and gone without generating much heat. For the American leader, making democracy globally attractive has been a priority, and in that spirit, this summit was aimed at generating a greater sense of solidarity among fellow democracies.

This is an age when the health of democracies across the world is a genuine cause for concern and the rise of China has made the debate on the efficacy of political institutions even more germane to contemporary shifts in global narratives. The intellectual consensus of the past that democracy is the best option available no longer seems secure.

For Biden, it has been an article of faith to showcase the effectiveness of democracy, and he campaigned on this agenda, keen to project it both at home and abroad at a time when the credibility of American democracy has been challenged, unlike any other time in its history.

He, therefore, rallied world leaders to work with him to bolster democratic institutions amid the march of authoritarian systems like China’s and Russia’s as well as a ‘backward slide’ of democracy around the globe. In the context of the mob attack on the Capitol complex in Washington DC on 6 January this year, he also turned the spotlight inwards by arguing that “here in the United States we know as well as anyone that renewing our democracy and strengthening our democratic institutions requires constant effort.

The summit saw the participation of more than 100 leaders, who underlined growing challenges to global democratic aspirations such as corruption, socio-economic inequalities, disinformation and the growing role of Big Tech. There was a joint pushback from China and Russia, which lambasted the Biden administration as exhibiting a “Cold-War mentality” that would “stoke up ideological confrontation and a rift in the world.”

It released a white paper titled China: Democracy That Works, which enunciated that “there is no fixed model of democracy; it manifests itself in many forms. Assessing the myriad political systems in the world against a single yardstick and examining diverse political structures in monochrome are in themselves undemocratic.”

It is ironical that this contestation of the very meaning of democracy is happening two decades after China’s accession to the World Trade Organization (WTO) In December 2001 that has had a transformative impact on the global economy as well as global polity.

That was the time when Francis Fukuyama’s “end of history” narrative still resonated with policymakers, exemplified in the views of former US President Bill Clinton when he suggested that “importing one of democracy’s most cherished values, economic freedom”, would eventually bring political changes in China. That political freedom would smoothly flow from economic liberalization was the consensus across the political and academic world back then.

But even as China used the opportunities it got to emerge over the past two decades as the world’s largest economy in purchasing power parity terms, the second largest at market exchange rates, and the world’s largest trading nation, democracy was nowhere to be found. Significantly, China started using its global economic clout for geopolitical ends, as reflected in its trade coercion of Australia since 2020 and more recently Lithuania. American policymakers today are left complaining that “Beijing is pursuing a state-centred economic model that tilts the field by deploying policies that disadvantage US businesses and other foreign companies in sectors deemed ‘strategic’.”

The West has been forced to reckon with the challenge China poses to the global economic and political order after decades of ignoring a fundamental contradiction in its approach. The very global economic system that propelled China to the global hierarchy’s top has been undercut by Beijing through its market distortion and coercive trade practices.

The US is beginning to challenge this more frontally than ever before. In a recent intervention, the US undersecretary for economic growth, energy and the environment, Jose W. Fernandez, exhorted the US business community to not see themselves as mere bystanders in the US-China strategic engagement, but “be mindful how your activities can affect US National Security and the fundamental values we hold dear.”

This is an important US shift away from viewing politics as subservient to economic interests towards a reassertion of the primacy of political objectives. This brings us back to the fundamental issue of democracy and reasons for the emergence of new geopolitical fault-lines. India’s role as the world’s largest democracy is critical in this discourse, and as Prime Minister Narendra Modi highlighted in his remarks at the summit, “the India story has one clear message to the world—that democracy can deliver; that democracy has delivered and that democracy will continue to deliver.”

Every democracy is a work in progress and responding to democratic aspirations in a society riven with multiple socio-economic fault-lines is a huge challenge, but India has repeatedly proven naysayers wrong on the country’s democratic consolidation. And India’s economic rise within a democratic set-up is itself a challenge to Chinese propaganda on an authoritarian model’s efficacy. While the fragility of democracies in the West has been apparent to the whole world, Indian democracy has remained resilient.

For the West, an important corrective was in order, but, significantly for China, the summit sent out a message that resilient Indian democracy could take its political claims apart. If the Chinese Communist Party can tom-tom its non-existent democratic credentials, India should be far more vocal about its genuine democratic accomplishments without being despondent about challenges.

First published on Livemint, What constitutes democracy is for actual democracies to define.

Read another piece on Afghanistan titled “Amid great power competition, what Delhi and Moscow mean to each other” in IMPRI insights