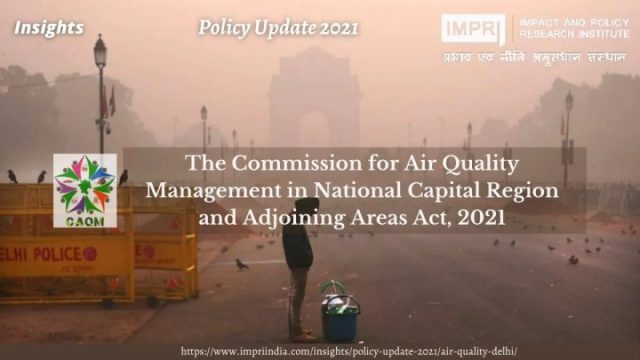 The Commission for air quality management (CAQM) was established under Air Quality Management in National Capital Region and Adjoining Areas Ordinance in October 2020. The parliament was not in session during this time, and an urgent need for such legislation was felt. The ordinance lapsed on 12th March 2021, as the parliament could not act on it by then.

Consequently, a new bill for this was promulgated. It was given the assent of both the houses and the President, following which  Air Quality Management in National Capital Region and Adjoining Areas Act,2021 was passed on 12th August 2021.

The country brought The Air (Prevention And Control of Pollution) Act, 1981, after which the government took the agency to monitor the national air quality and curb pollution. The Central Pollution Control Board (CPCB) was entrusted with the functions and powers to monitor air quality under this act. Additionally, the Supreme Court of India declared the “right to a decent environment, including pollution-free water and air” as a fundamental right under Article 21 (right to life) in the MC Mehta vs. Union of India, 1988 case. Following the case, apex court itself started monitoring Delhi’s air quality and gave directions to the central government to establish the Environment Pollution (Prevention and Control) Authority(EPCA).

After the inception of Air Quality Management in the National Capital Region and Adjoining Areas Act, the EPCA has dissolved. The primary responsibility of maintaining clean air in Delhi lies with the CAQM.

Several bodies and agencies have carried out monitoring of air quality in the capital city of Delhi. These included the CPCB, EPCA, state governments of the region (Delhi, Uttar Pradesh, Rajasthan, and Haryana), etc. Above all, the Union Ministry of Environment, Forest and Climate Change and the Supreme court also kept an eye.

The act seeks to create a body that overarches and consolidates all these agencies. This will enhance the air quality monitoring by bringing all the stakeholders on one platform and enhancing the efficiency of the monitoring process. Ultimately the process will become more efficient and comprehensive while reaching the results in a time-bound manner.

The Commission has members and representation from almost all stakeholders. It has a diverse panel, coming from all backgrounds.

The commision has been entrusted with following functions:

The commission is directly accountable to the parliament. While Replying to the bill during the session, the Environment Minister iterated that it is the responsibility of the central government to deal with air pollution.

The CAQM is a fairly new body that came into existence a year ago. The performance and impact can be evaluated after analyzing the advisories and directions issued by the body in this duration. These advisories include-

Despite these directions and advisories, the Commission has had little effect on the capital state’s air pollution this year. In November, the air quality situation worsened, so much so that a writ petition was filed under the Supreme court as Aditya Dubey vs. Union of India. The apex court finally had to come to the rescue and ask the Delhi government and the Commission for Air Quality Management to take immediate steps. After which, the body urgently took steps to shut schools down, advise people to work from home, and halt construction activities in Delhi. It also sent advisories to the state to take necessary steps.

The establishment of this Commission to consolidate the effort for air quality monitoring was well structured. However, few issues and challenges are present in the policy environment that require addressing to ensure the Commission’s success.

Non-seriousness and inaction of the government to take steps for the abatement and control of air pollution in winter 2021 led to filing a petition in the supreme court. Only after the directions from the court, the CAQM issues an urgent advisory to protect the children and people from harmful smog.

The Commission has taken steps to advise the adjoining states to prepare plans for several innovative steps. However, further coordination is required to oversee that the plans are prepared and implemented efficiently. There is also the lack of time-bound commitment to clean the air in these advisories, which should be addressed.

Even when the bill was being discussed in the parliament, the states pointed out that the Commission has a large number of members from the central government. According to this opposition, this goes against federalism. This issue should be resolved, and the state governments should be taken into complete confidence such that the coordination improves and the Commission works efficiently.

Over the years, our country has improved technologically and institutionally to tackle the problem of emissions and climate change and. Several systems are in place, including the nationwide implemented National Air quality monitoring program and the international commitment of Intended Nationally Determined Commitment(INDC) to curb emission below specific targets. further National Clean Air Program (NCAP), which aims to reduce pollution by 20-30% in annual PM concentration by 2024. The Air Quality Management in National Capital Region and Adjoining Areas Act, is an addition to these efforts.

However, still every year, we see deteriorating air quality. The national capital’s air has deteriorated so much that on 19 October 2021, it was reported that the Delhi residents breathed good air after 413 days on the Air quality index. In 2015, 2016, and 2018, Delhi did not record a single good air day. The situation is extreme and requires urgent attention and steps. The establishment of the new agency solely for the issue is a hope towards better air quality, although hoping for breathable air yearlong, in Delhi still seems utopian.

Direction on Steps for effective Control of Air Pollution in the wake of prevailing air quality scenario in Delhi-NCR dt 16.11.2021. (n.d.). Retrieved from caqm.nic.in.

Roy, E. (2021). Explained: What the commission for air quality management in NCR aims to achieve and why are some opposing it? The Indian Express.

THE COMMISSION FOR AIR QUALITY MANAGEMENT IN NATIONAL CAPITAL REGION AND ADJOINING AREAS ACT. (2021, August 13). The Gazette of India. New Delhi: MINISTRY OF LAW AND JUSTICE, Government of India.

Sonia Singh is a Researcher at IMPRI. She is currently pursuing her Master’s degree in Regulatory Policy and Governance from Tata Institute of Social Sciences, Mumbai