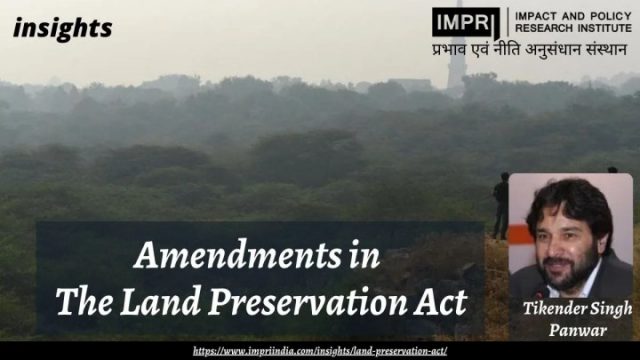 This year on world environment day three aspects are of umpteen importance in ensuring a sustainable world. Reducing carbon emission; the challenge of biodiversity, the rapid pace with which it is reducing and; the massive land-use change taking place across the world. In fact, all three are interconnected. Forests with tree cover are important for not just maintaining rich biodiversity but also minimum land-use change from open spaces to more concrete jungles.

The INDCs(Intended Nationally Determined Contributions) from the Indian government lays emphasis on these aspects. However, the actual reality on the ground is quite disturbing.

The Himachal Pradesh government, department of forests, during the Covid pandemic in February 2021, amended section 4 read with section 7 of the Himachal Pradesh Land Preservation Act, 1978. The amendments removed the prohibition or restriction on the felling of 19 species of different trees in the state. The amendment read, “Provided that there shall be no prohibition or restriction on felling of following species of trees”

A maximum of 5 trees is allowed to be felled annually according to this order and no permission from the government is now required.

The kisans, and most of their organisations have welcomed this decision as this decision, they claim, will free them from incessant harassment by the forest officials. The Himachal state has a long history of forest management and regulatory laws.

The British brought the first forest regulation act in the country and so was it implemented in the state. However, they ensured the traditional rights of the farming communities in the forest. The Waziwulurje rights were recognised and rights pertaining to grazing, fuel wood and timber were registered. Till 1980, the forests were managed by the respective state governments; after the nationalisation of forests, the forest management went into the hands of the union government.

It affected the registered rights of the mountain communities as well. After 2005, the FRA was passed, still, rights pertaining to timber and other rights are restricted. This has further alienated the people from the forests. And this is the reason why during the forest fires, the people who used to be the first responders are hardly seen to douse the fire.

The current amendments apply to private land. The private land holding in the state is not much. More than 85 per cent of the people own less than an acre of land. The forest department’s logic behind these amendments is that this will allow more plantations and better forestry will emerge.

However, the period since February 2021, does not exhibit such a novelty! There are also challenges in allowing blanket opening of felling of trees without regulation.

Some of the trees like Safeda, Poplar, Biuns, Toon, and Sagwan have high commercial value. Most of them are used for making furniture and have a market value for converting them into doors and windows. Allowing five trees in a year can lead to massive felling for commercial use and in the absence of regulation, it will be difficult to check their transit.

Secondly, there is no direction of a regenerative strategy for these trees. Some of the species like Ritha have a high medicinal value and once again can be used for commercial use. Once a Ritha tree is felled, there is hardly a drive for plantation of these species. In fact, the forest department does not even have the saplings of such species. Likewise, Fagoora and Paza are trees with a unique ability to produce fruits once grafting is done on them. Paza is grafted with cherry fruit. It will be completely difficult to sustain such mixed forestry with rampant green felling.

Thirdly, many of the species like Ban, Aam, Bihul, Khadki, Biuns etc., are broad leaf species. These species have a very high ability of carbon sequestration. The government of Himachal Pradesh has been claiming about their forest policy in this direction. Allowing felling of these trees will be a big loss in this direction.

Fourthly, some of the species like Ban are one of the finest water coagulants in the mountain region. The natural water springs in different parts of the hills are a result of these trees. In fact, what the government must allow and do is to get rid of Pine trees and plant broad leaf trees with mixed forests in the state. Not only Pine trees are responsible for massive forest fires but they also turn to soil acidic. Thanks to the paranoia in the early 80s for enhancing the green cover Himachal got this massive plantation drive of Pine, thus ruining its conventional mixed forest plan.

Three incidents pertaining to tree felling, which may not be directly linked to the amendments, prove that there will be a disaster as far as tree management in the state is concerned. These amendments provide a bullwork for such nefarious ideas and designs.

The first one is from Tikker in the Rohru sub-division of the forest department. According to a report published on a national daily, nearly 4,000 trees were chopped down as claimed by the locals, however, the DFO(Divisional Forest Officer) said only 74 were felled. And these were not from the species allowed in the above amendment. This was done during the Covid pandemic period when there was hardly any activity of the state government.

The second one is from Jubberhatti in Shimla district where the forest officer in an RTI inquiry revealed that a person under the umbrella of these amendments had cut nearly 13 trees and the total volume of the wood is nearly 8 cubic metres. The problem with this amendment is that there is no regulation over felling. It can be done in dozens or even hundreds according to the market availability.

The third one is from Thanbagh forest in Sangrah division of Sirmour district. Here nearly 114 trees were felled. In a raid conducted by the forest officials, the wood of 114 trees of Cedrus deodara was recovered. The trees were converted into 300 pieces of logs and none of them was near their original place of the trees. Even the buts of the trees were hidden.

There may not be a direct connection between the first and the third incident with the amendments, though the second pertains to the outcome of that amendment, the point is that with no regulatory authority, allowing the felling of trees of 19 species could well prove to be a bad idea.

The forest management should be to ensure better green cover with species that are suited for the mountains and not plant blindly as was done in the past. The needs of the kisans must definitely be addressed, but without a regulatory mechanism, it may well prove to be losing a large number of trees in the state. Trees cannot and should not be only in the dense forests; around homes, around farms etc., they are very much required.