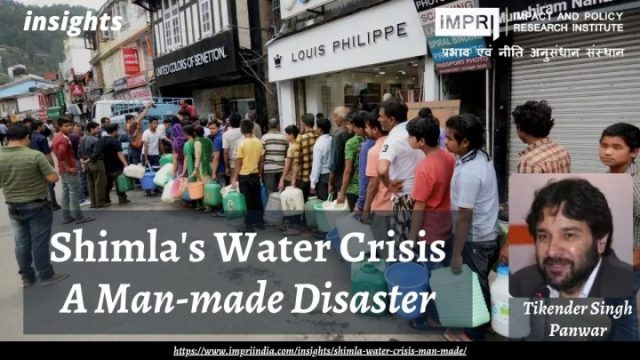 Climate change is a continuing phenomenon. It has accentuated in the last four decades during which human-induced impact on climate substantially affected almost all aspects of life – nature being the worst affected. As a philosopher pointed out, the commodification of objects does not spare the commoditisation of nature and such a path of development is unfolding at a swift pace. One of the foremost areas of climate change-related to urban development is water.

Water sources, especially in urban areas, are not just depleting but are facing the worst forms of permanent loss. For mountain towns particularly, the impact of climate change is very stark and substantial. The response of city governments and even state governments is not to address the problem and adapt accordingly. Rather it is to shift its resource base hundreds of kilometres away. As if those resources are going to remain forever!

Delhi moves to Renuka in Himachal Pradesh to meet its demand, hundreds of kilometres away; and Shimla, a mountain town now is reaching out to the Sutlej river for mitigating its water crisis.

The impact of climate change is definitely there. But the response is quite contrary to the need of meeting this challenge. The last few decades have witnessed three distinct phenomena.

Firstly, in and around Shimla, overall rainfall has increased but its period has shortened. Snowfall has decreased too. Simply put, it means that because of climate change, rainfall, instead of occurring at a longer stretch, now takes place in torrents. Unlike in the past, what is called in a local dialect jhari – rainfall for days together – is now missing.

Secondly, the snowline is also receding at a faster pace. Not just that, but snowfall in the mountains during the period from November to February is also reducing. The overall snowfall and related snow-fed water resources have also been badly affected.

Thirdly, in response to such a change, which seems quite imminent, our adaptability capacities are not just low and slow but are quite contrary to the requirement. The rapid urbanisation that is taking place is hitting water catchment areas that are so important for maintaining a healthy supply during summers. What is happening is, take for example the case of Shimla, where the land-use change is taking place at a rapid pace.

This land-use change, which is converting open spaces into real estate, is diminishing the capacity of the mountains to hold and coagulate water. The British Manual prescribes the design for the construction of water drains in Shimla town. It specifies that drains should not be concretised but embanked, ensuring water seepage and natural recharge of water resources. However, if the two major plans are taken into consideration, the Shimla Beautification Plan and the Shimla Smart City Plan, there is a paranoid rush for concretising and covering the drains and nullahs all across Shimla town. This is a recipe for disaster in mountain ecology.

Likewise, another central agency that must be indicted is the government itself. A cursory look at some of the residences and bungalows of the central and state governments in Shimla shows that most of the paths and open spaces around these houses have been concretised. See below a photograph showing such a work taken at the Himachal Pradesh University.

Why is land-use change important? Because, according to a study done by Naik Foundation, the 20-odd springs in Shimla can cater to almost 25 per cent of the water demand in the region. But the focus now seems to be to rely on capital-intensive technologies and fetching water from distant sources.

Another major blow to the Shimla water system is the near privatisation of the Shimla utility that was created by us, called the GSWSSC (Greater Shimla Water Supply and Sewage Circle) under the Shimla Municipal Corporation, with a fair amount of autonomy but under democratic control. The World Bank wanted to turn it into a company mode entity but after almost four back-to-back meetings we did not allow and convinced them for its retention. Why the World Bank? Because they had agreed to a sum of nearly Rs 1,100 crore for the water utility.

However, as our term got over in 2017, the GSWSSC was converted into a company called Shimla Jal Nigam Limited where there is no democratic control. Instead of Shimla’s elected council planning for itself, it is the company that does so and the results are in front of everyone.

Not just the crisis continues to loom large, rather the approach to handling the crisis is also too bureaucratic. This is further going to worsen owing to the underlying emphasis on generating revenue from the water!

This article was first published in Outlook as Shimla’s Water Crisis Is A Man-Made Disaster And How We Made It One.

Read another article by Tikender Singh Panwar on Amendments in The Land Preservation Act in IMPRI insights.