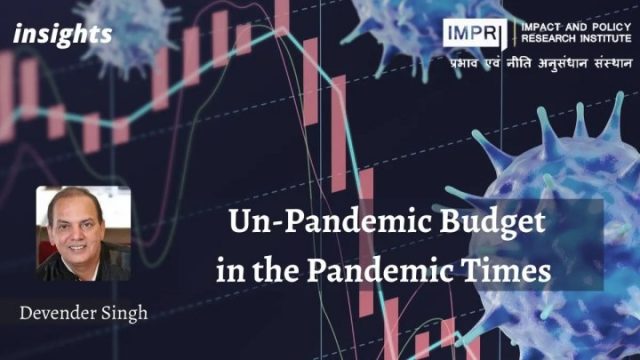 The budget this year does not give an impression that we are still amidst a pandemic; a pandemic, which has resulted in the loss of countless lives, liberty, and livelihoods. It seems to convey that the pandemic is over and that the only important thing to do right now is to revive the economy. Once the economy is pink, everything else will automatically fall into place.

From the budget speech, it can also be surmised that the government thinks that the steps it has taken in the last two years such as improved health infrastructure, speed, and coverage of vaccinations have borne the desired results, because of which the country has improved capacities to withstand challenges brought on by a pandemic, the current one or any other in future.

At its very basic, the budget is a yearly financial statement of the revenue receipts and expenditure incurred in the previous year as well as the outlays for different areas for the coming year based on past experience as well as expressed needs by the responsible ministry/department.

But of late, especially in the absence of five-year plans by the planning commission, the budget has also become some sort of a vision document for the country and different sectors as it lays out policies and programs which are long term, spanning over several years. These point to us the emergent priority areas for the country, as reckoned by the government of the day, and consequent planning over several years.

In last year’s budget, there were 6 pillars, and one of these pillars, the very first pillar, was Health and Wellbeing. There are 4 pillars in the budget this year, and health is not one of them. The unraveling of the public health system during the first and the second wave has been all but left on the margin as a ‘side show’.

It is well recognized that the poor and vulnerable population groups felt the brunt of the pandemic and preventive measures such as lockdown more than others. Existing inequalities not only came out in the open but have since increased. The response burden of the pandemic was mainly borne by public institutions and it was felt that these institutions need investments. A need was also felt to invest in science, evidence, and data for a timely and effective response.

So where do we stand in this regard after this year’s budget? Prima facie, there seems to be a 16% increment in the health budget, from 74,602 crores to 86,200 crores. But if we take the revised estimate as the base figure and not the budget estimate then this increase is only 285 crores, from 85,915 to 86200 crores! Out of this, 3200 crores have been allocated for health research.

The National Health Mission, the mainstay of health services and programs, has seen almost no change in budget allocation from the last year; it was 36576 crores last year, increased to 37,000 crores this year. It could very well be less than the last year’s allocation in real terms, after taking inflation into account. The health infrastructure mission’s budget has been increased from 315 crores to 978 crores.

Despite one-quarter of the population yet to be fully vaccinated and large numbers to be given booster doses, the budget for vaccination has been slashed. The nutrition budget has been reduced despite the evidence that hunger well as anemia in women and children in India is rising.

Between NFHS’s fourth and fifth rounds, the number of anemic women and children increased from 53.1% to 57% and 58.6% to 67.1%, respectively. Despite this, the provision for the Pradhan Mantri Poshan Shakti Nirman has been slashed from 11,500 crores last year to 10,234 crores in the current budget. The budget for MGNREGS, a main source of employment in these trying times, has been slashed.

The only significant step in this budget is the digital push through two initiatives in the health sector. The first one is an open platform for the National Digital Health Ecosystem. This will comprise digital registries of health providers and health facilities, unique health identity, consent framework, and universal access to health facilities.

The second one is the National Tele Mental Health Programme, comprising a network of 23 tele-mental health centers of excellence, with NIMHANS being the nodal center and the International Institute of Information Technology-Bangalore providing technical support.

Both of these are welcome steps but the budget outlays and implementation plans need to be seen first to view the seriousness behind these announcements as well as the feasibility of these initiatives. For example, the increase in budgetary allocation for mental health is paltry, from 597 crores to Rs 610 crores. So, how an additional initiative will be funded with this much money unless there is a plan to take away money from existing schemes and programs in the mental health sector?

Some good noises were made in the last year’s budget on ‘comprehensive health and wellbeing’ by including water and sanitation, nutrition in the ambit of health along with a commitment to strengthen capacities in surveillance, health research, and public health workforce. In the last year’s budget, the finance minister also announced a new centrally sponsored scheme under the name ‘PM AtmaNirbhar Swasth Bharat Yojana’ to develop capacities of primary, secondary, and tertiary care health systems, strengthen existing national institutions, and create new institutions, to cater to detection and cure of new and emerging diseases. Approximately 64,180 crores were to spend over the next 6 years under this scheme.

We are none the wiser about the implementation level and future plan for these programs and schemes after this budget year’s speech. The finance minister remarked during her last year’s speech, “Even at the outset, I would like to say that the investment on health infrastructure in this budget has increased substantially. Progressively, as institutions absorb more, we shall commit more. Taking a holistic approach to health, we focus on strengthening three areas: preventive, curative, and wellbeing’.

As per the Economic Survey 2022, India spends 2.1% of its GDP on health, and it seems from the current budget that the government is happy spending as much on health. All the promises of spending 3% and more of GDP on health seem a far cry as gauged from this year’s budget. Words never ever felt as hollow and small as now.