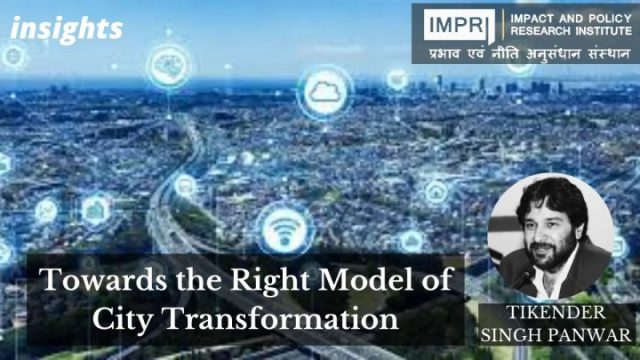 75 years of the history of modern India is too short a period for judging the development model of a country, particularly its model of city governance. Both development and governance models are inherently interlinked. However, if we draw the history back to almost 5,000 years old from the early urban settlements like the Harappan towns then it is not too short. The journey from 1947 to the current period is a reflection of our past.

From the models of a no ‘ruler-ruled’ concept in the earliest urban settlements to the institution of the kings along with building typologies of palaces to further walled cities and military segregation from the civil to the colonial period of a complete duality, leading to a post-independence era of centralized planning and finally to the 74th constitutional amendment and the institutions of the special purpose vehicles (SPVs) are all, but a fascinating journey of city governance.

The scope of this article does not give space to write about this long journey. However, this history tells us that there have been moments when cities were governed by people themselves with quite startling urban infrastructures.

Cities, the Centre of Growth

Currently, nearly 34 percent of Indian people live in urban India in over 9,000 statutory and census towns. Though the geographical space is less than 3 percent, the cities, however, contribute more than 66 percent of the country’s GDP. Also, nearly 90 percent of government revenue comes from these cities. Therefore, cities are important spaces not just from the demographic aspect, but also from the economic aspect. No wonder nobody, no one from the state to the Centre, wants to lose control of these cities.

The earlier planning model also called the Nehruvian model of city development was a centralized model with a view to building industrial townships in the country. New modern towns like Chandigarh, etc were also built with a vision to accommodate a large number of refugees from East and West Pakistan. All the new nagars suffixed townships in Delhi, like Lajpat Nagar, Rajendra Nagar, etc are post-independence rehabilitation of refugees.

The stark characteristic of this model was the role of the powerful State in planning and its responsibility in providing housing, employment, services, etc.

Big moves were undertaken and big industries were established accommodating a large number of migrants from rural to urban India. Most of these cities were manufacturing hubs; cotton mills dominated cities like Delhi, Bombay, Kanpur, etc.

Along with this during the first two five-year plans, the creation of the ministry of urban development, town and country planning departments, and the starting of the SPA began.

However, things started changing in the ’80s, and slowly and slowly by the ’90s with the opening up of the economy there were marked changes.

The inability of the planning agencies to comprehend the demographic change in the cities pushed the cities to the peripheries with more and more areas being usurped under the urban ambit. From 1991 to 2011, around 221 towns merged. This was half the number a decade ago.

The city’s economy also changed substantially. Essentially the urban centers considered to be manufacturing hubs started turning into services magnets. More KPOs and BPOs were the order of the day. Bengaluru, Gurgaon, etc are examples of this transformation. Though the vision of the first Urban Commission which was formed in the mid-80s and chaired by Charles Correa, the famous architect of the country, laid emphasis on manufacturing and planning accordingly. However, post the ’90s the shift was quite dramatic.

The profile of the cities also changed from mere managers to entrepreneurs. The cities were supposed to attract private capital for investment and hence were supposed to be competitive. Here being competitive meant to ensure reforms according to the changing paradigm of the economy. The land was a major issue; hence land laws were changed to attract investments both from the indigenous big capital and foreign capital. It is a different matter that almost 50 percent of the investment in the urban sector still continued from the State and only 16 percent came from the big capital that too was limited to a few cities.

Amendment in the City Governance

During the 90s, a major intervention took place from the Union government through the 74th constitutional amendment, pertaining to urban India. Some of the essential features of the 74th amendment addressed governance issues in urban India. It was mandated that the elections must be held after every five years. Functions, functionaries, and finances must be devolved to the cities ensuring better governance. The power to collect taxes was also given to the local bodies under the act.

The governance model further stretched people’s empowerment by mandating that there must be wards and the constitution of ward committees through ward sabhas was envisioned. Under the 12th Schedule, 18 functions were supposed to be transferred to the city governments. The foremost is planning for themselves. Hence town planning was the essence of this amendment and this should have been done by the city government. However, with several reviews after the passing of this amendment, the core findings are that negligible work has been done in this direction. According to a study conducted by Praja, not more than three functions have been universally passed on to the city governments.

Despite the fact that there is a clear direction for holding elections to city governments after every five years, the state governments or the union government through some pretext plays with the time period. Delhi, Mumbai, and Shimla continue to surpass their time and these cities are run by administrators currently and not by the council.

The empowerment of the city council and the mayor is another feature that must be taken into consideration. Except in West Bengal and Madhya Pradesh, where the mayor in the council is an added feature of governance, most of the executive decisions are taken by the commissioner in the cities. The mayor remains a ceremonial head with hardly any executive powers or duties.

The smart city model of governance embedded in the SPV model where the city’s elected members are not guiding developmental challenges is literally like writing an obituary of the 74th constitutional amendment.

The RBI in its recent report had suggested that to ensure a sustainable model of development in the cities, the only way is by empowering the cities and their representatives. However, there is no clear direction in this regard.

Why is it that the state or even the union government does not want to lose control over the cities? There are many reasons for such an absurd understanding. However, one of the core reasons is that cities contribute enormous wealth as shown above. Most of the government revenues come from them. Cities are also important centers for capital accumulation and any actual democratization process by empowering people is a hindrance to this accumulation as well.

Another major change witnessed in the last three decades of reforms is the surge in the informal sector. Permanent jobs were reduced and temporary jobs mostly in the informal sector increased. This transformation also brought in the precarious nature of the exploitation of human labor. On the one hand, cities were adopting business models, thus thrusting more pressure on the people, and on the other, the change in the nature of jobs compounded their misery.

The recent lockdown announced by the prime minister during the Covid pandemic showed the precarious nature of the informal sector workers most of whom are migrants into the cities. They could not hold back in the cities for even 24 hours without work and a habitat.

The project-oriented approach, centralized customized planning, nexus of big consultants in developing master plans, and focus on capital-intensive technologies have led to such a situation where neither the built-in structures are sustainable nor the habitat. The governance model is also fractured. Let me cite two examples. The impact of climate change is quite evident in Indian cities and heat island effects and flooding are becoming common features. Hence infrastructure development models must rely on resilience as the core element.

Take the mobility sector for instance. Instead of focusing on non-motorized mobility, the push is for capital-intensive mobility by creating infrastructure conducive to more cars. Thus inducing people to buy more cars. Instead of the rampant construction of flyovers in the cities, efforts should have been made to create parallel infrastructure for pedestrians and cyclists. Their spaces have been usurped badly. Throughout the world, public transport is a sustainable model of development. We have built cities like Gurgaon where we have more than three dozen shopping malls and radiating walls but no public transport.

The other example is from the solid waste management sector. The cities have already turned into minarets of waste. The easy and viable solution is a decentralized, source segregation and treatment model. However, the push is for more capital-intensive waste to energy plants, most of which do not work at all.

Hence, cities are tuning out to be blowing toxic air and we have some of the most polluted cities in the world. There is a strong connection between the city development model and the problems being faced by the citizens. After 75 years, of entering the age of artificial intelligence, where another challenge would be a major disruption in the economy and the skill challenge that we have, instead of having decent work cities, we are building highly unequal cities. This model of massive disproportion in assets and income will lead to massive unrest.

What we require are cities that are caring, participatory, and democratic. In order to achieve it, the planning model must be inversed. Instead of planning from the top, this must start from the bottom quintessentially the people should plan for themselves.

This article was first published in Economic Times as The Cities in Transformation – Need for Development and Governance Models on August 22, 2022.