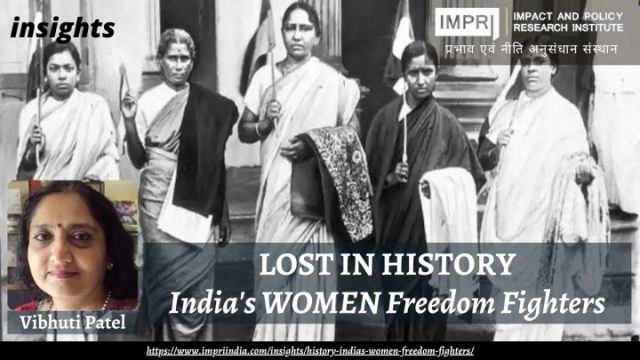 On the occasion of the 75th Anniversary of Independence, let us remind ourselves of Indian Women Freedom Fighters who are lost in pages of History. All of us are proud Indians and when we hear the stories of heroic struggles to get out of the shackles of colonial rule, we remember our great and brave leaders who made great sacrifices and faced tremendous hardships.

From the 1st war of independence in 1857 to the attainment of independence in 1947 lakhs of freedom fighters, both men and women fought to free the country from the British imperialists. Outstanding contribution of patriotic and courageous women in the struggle for an Independent India must be remembered and told and retold to the citizens of India and the whole world.  They actively participated in the rallies, picketing, public meetings, led processions, gave lectures, wrote in newspapers and addressed demonstrations, courted arrests and even in the prisons continued their commitment to the Indian freedom movement.

The First Freedom Struggle against the British Rule (1857)

Heroic role Rani Laxmibai (19-11-1828 to 18-6-1958) who fought shoulder to shoulder with men freedom fighters became a role model for millions of Indian women due to her brave fight against the British rule till her last breath. Rani Laxmibai was an Indian queen of the Maratha princely state of Jhansi in North India. Rani of Ramgarh, Rani Tare Bai, Baiza Bai, Chauhan Rani, Rani Jindan Kaur, Tapasvini Maharani in the War of Independence.   Rani Lakshmi Bai’s heroism and exemplary leadership laid an outstanding example of real patriotism and became a symbol of resistance to the British Raj for Indian nationalists.

In 1897, Bhima Bai Holkar fought bravely against the British colonel Malcolm and defeated him in guerilla warfare. Many women including Rani Channama of Kittur, Rani Begam Hazrat Mahal of Avadh fought against British East India company in the 19th century.

They started schools and vocational training institutions to make them economically independent and boosted their morale to lead a life of self-respect and dignity. Dr. Rakmabai Save (22-11-1864 to 25-9-1955) challenged her child-marriage and refused to cohabit with her husband, as a result of which ‘age of consent’ was institutionalised in the Indian legal system. Dr. Rakmabai dedicated her life to Mother India, became medical specialist and as a doctor, played pivotal role in establishment of Civil hospitals in Pune, Surat and Rajkot.

Women Freedom Fighters at the Peak of Freedom Movement during 1919 to 1947:

In 1991, the ruthless massacre of innocent citizens who had gathered at Jallianwala Bagh to celebrate Baishakhi (Spring Festival of Punjab) witness massive participation of women in the protest rallies throughout the country. Women courted arrest in ASAHAKAR ANDOLAN-Non-cooperation Movement launched (1920) as they were picketing in the public places against the British Rule. In the Civil Disobedience the Dandi Salt March (1930) Sarojini Naidu, Kamaldevi Chattopadhyay were at the forefront (even when Gandhiji did not want women to join the Dandi March to save them from police brutality).

Usha Mehta who was a student at the time of The Quit India Movement (1942) became Broadcaster of Underground Radio Voice of India and she was also a Leader of Monkey Brigade of children who acted as messengers of the Freedom Movement.

In the 20th century, Indian women who joined the national movement belonged to educated and liberal families, as well as those from the rural areas and from all walk of life, all castes, religions and communities. Sarojini Naidu, Kasturba Gandhi, Vijayalakmi Pundit, Bhikaiji Rustom Cama and Annie Besant, Rokeya Sakhavat Hussain, Kamaladevi Chattopadhyay are revered for their glorious contribution in the political sphere as well as for the social reforms for women’s education and right to vote for Indian women. In 1937, Rani Lakshmibai Rajwade, Smt, Mridula Sarabhai and Mrs. Purvish Dubhash as members of the Planning Committee prepared a visionary and far-sighted document, Women’s Role in Planned Economy.

During painful and devastating experience of partition of India, Kamalben Patel, Mrudula Sarabhai and Pushpaben Mehta provided life support to abandoned, separated and deserted women in the refugee camps and convinced the honourable Prime Minister, Pandit Nehru to start Central Social Welfare Board to rehabilitate the refugee women and children in dire circumstances to rebuild their lives with state support.

These 15 women came from different socio-cultural locations and economic backgrounds, but their commitment to throw out the colonial regime was unparallel. These fearless freedom fighters were intellectually articulate, excellent orators, convincing debtors, courageous street fighters, fearless when faced with ruthless oppression and merciless onslaught by the British regime. They were extremely compassionate towards the weaker sections of society.

Among them, Dakshayani Velayudhan was the only one who came from the under-privileged background of Pulaya community of Cochin and being a Dalit woman had faced tremendous personal hardship to get educated and be active in the freedom movement. She was one of the first women of her community to be educated and active in the political sphere during 1940s. At the age of 30, Dakshayani was nominated to the to the Cochin Legislative Council in 1945.

When she was inducted in the Constituent Assembly, her age was 34 years. Though she was the youngest member of the team for drafting of the Constitution of India, her political vision, clarity about secular democracy and ability for ideation commanded great respect for her arguments. An unwavering supporter of a common national identity for every Indian, Dakshayani did not support separate electorates or reservation. Also, despite being a staunch follower of both Gandhi and Dr BR Ambedkar, she never shied away from challenging them both on the strength of her own convictions.

At the time of painful partition of India that displaced crores of men, women and children, three women freedom fights were entrusted the task of managing the Refugee Camps at the border of India and the West Pakistan, at the Kashmir Valley and at the border of West Bengal and the East Pakistan. These institution builder women, Mrudula Sababhai, Kamalaben Patel and Pushpaben Mehta not only repatriated separated family members but 1000s of abandoned and deserted women and children by their family members could rebuild their shattered life due to their efforts.

They were responsible to convince the Prime Minister of India, Pandit Jawaharlal Nehru to established Central Social welfare Board for rehabilitation of the refugees of partition. Dr. Hansa Mehta was responsible for inclusion of women’s concerns in the Universal Declaration of Human Rights, 1948 of the United Nations.

We Salute our Women Freedom Fighters

Women freedom fighters had head and heart as well as power of tongue, lung and pen. They were educated, had ground-level experiences in socio-cultural, economic, political and legal arena. They were intellectually endowed, critically conscious and guided by courage of conviction in the nation building. They were responsive to varied life-worlds of Indian women and hence, could transcend the barriers of caste, class, ethnicity, religion, language and regions and work in unison. We salute their patriotism and gender sensitivity.

Read the views by Vibuti Patel Gender Responsive Public Policy is the Need of the Hour- Prof. Vibhuti Patel in IMPRI insights.