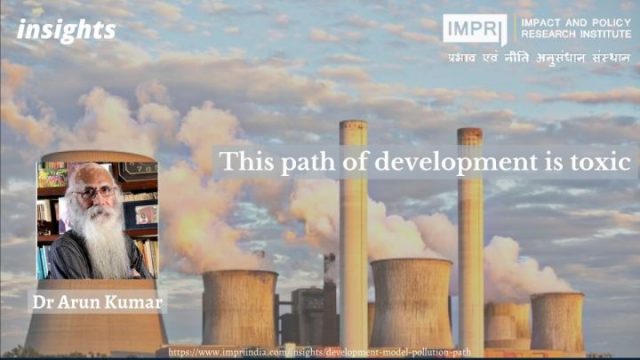 There are many discussions going on regarding pollution. But the one aspect that is being overlooked in all these debates is our development model. It has a major contribution to increasing pollution. It considers material development as the measure of human development. This model, which is about 150-200 years old, emphasizes maximizing production so that people’s income increases and they can increase their physical well-being. It is based on the underlying notion, ’more is better’ (the more consumption higher the welfare).

According to the principles of economics, we are rational beings working to maximize our well-being, we are supposed to think of ourselves and stay focused on the fulfillment of our self-interests.

Because of this, every individual has to consume more, and increasing consumption leads to a rising level of pollution. The market has so distorted our thinking that we have come to accept that if we do not increase our consumption, we are not better off. This thinking was earlier limited to the developed nations, but soon it pervaded the affluent sections of the Developing World (India included), and subsequently spread to the middle classes as well.

The Socio-Economic Survey of Delhi for 2018 shows that 90 percent of the households have a monthly expenditure of less than Rs 25,000. Since Delhi’s per capita income is 3 times that of all India, it would imply that 90% of Indian families would spend less than Rs10,000 per month. In such a small amount, the basic needs can be barely fulfilled. So, the bulk of the consumption in the country is done by the affluent sections.

At the world level, most of the consuming class belongs to the rich nations. People there do not believe in ’recycling’. For them, waste means more production. That is why the share of this class in the carbon footprint is high while the poor contribute little. The problem is that despite understanding all this, the well-off are not ready to reduce their consumption. This is the underlying reason for climate change and extreme weather phenomena being witnessed with increasing frequency.

In India, at a low level of consumption, our rivers have lost their purity, the air is toxic and land is getting degraded. If we want, we can change this without outside help – it is in our hands. Of course, we are also affected by the rise in global temperature due to global factors, but the cleanliness of our rivers, purity of our air, and protection of our land are largely in our own hands.

Clearly, countries like India are suffering the consequences of adopting the notion of development from advanced nations. We indulge in more economic activities (that increase pollution) to increase our gross domestic product (GDP) on the one hand and then increase GDP and pat ourselves by indulging in cleanup efforts. That is, first get sick and then show more progress by adding the cost of treatment to GDP.

In the book `Indian Economy Since Independence’, I had asked whether more and more doctors, nurses and hospitals are signs of a developed society or a sick society? An optimal number of these can be understood, but if hospitals start opening in every street, then it should be understood that diseases are being promoted and that cannot be a sign of development.

At another place in this book, I have mentioned the study reported by the doctors of AIIMS in 2002. This study showed that in the 1980s, children did not complain of asthma, but by 2002, 15 percent of children in Delhi had asthma.

All this is a result of marketization. One of its principles, ’More is better’ is now ingrained in our lives. Another associated concept is `efficiency’ and that requires that all clean technology production take place in the developed countries and dirty technology production (like metals, chemicals, and waste recycling) in developing countries.

Why so? This was spelled out in 1992 in a paper by Lawrence Henry Summers, then Chief Economist of the World Bank. He had written an internal memo, which got leaked. He wrote, that if people die of prostate cancer, it is more efficient that they die in the developing countries than in developed countries because the residents of rich nations have higher per capita income and live comparatively longer. Since pollution causes cancer, it must be reduced in developed countries.

His thinking is also confirmed by the fact that the river Thames, which was once dirty like the present-day Yamuna of Delhi, could be cleaned because clean technology started being used there. The developing countries lack advanced technology and resources but the consumerism of the well-off in these countries can be certainly checked.

Clearly, as long as we increasingly follow the principles of marketization, the solution to the problem of pollution will be elusive. Everyone is presently talking about reducing carbon emissions, but it is increasing because we have chosen the wrong path so how can it be reduced.

All countries seem to agree to limit the rise in global temperature to 1.5 ° C above the pre-industrial level, but did anyone think that when we have not even reached this level and we are suffering ’extreme conditions of uncontrolled weather’, then matters can only get worse when the 1.5 degrees C standard is reached? That is why it would be better to talk of keeping the target lower than what the global temperature is now.

What’s the solution after all? We should recall that Mahatma Gandhi used to talk of non-violence. This included non-violence against nature (like deforestation and mining) and not just against other human beings. That is why, he said that nature can satisfy everyone’s needs, but not their greed. Unfortunately, we are gripped by greed. Pollution can be reversed only by making people aware. According to Gandhi, we have to adopt `voluntary poverty’ – a simple lifestyle. One needs to limit one’s needs. Consumption has to be reduced.

The interest of the collective has to be given importance over self-interest. And, every possible care has to be taken of society. If we can do that, then only will pollution decline and climate change be checked. The present model of development based on marketization can only lead to further ruin.

First published in Mainstream Weekly This path of development is toxic | Arun Kumar on 19 November 2021.