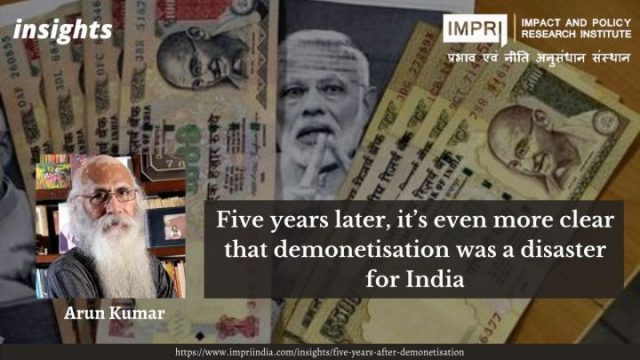 The demonetisation of high-denomination currency notes on November 8, 2016, created a nightmare for citizens that lasted several months. Long queues formed outside the banks and ATMs to obtain swap denotified currency notes for new ones so that life could continue. This situation persisted even beyond December 30, 2016, the last day for depositing old notes. Economic activity was severely dented for months. What the ruling party thought was a masterstroke turned out to be a disaster.

The sudden demonetisation was premised on the idea that “black means cash”. And, it is in high-denomination currency notes that black money would be held. So if the high-denomination notes were to be suddenly declared as illegal tender, then the black money of the rich would become null and void.

Just before demonetisation was announced, there was Rs 18 lakh crore of currency in circulation. Large-denomination currency notes of Rs 1,000 and Rs 500 constituted 85% of that amount. With demonetisation, the denotified notes could not be used except for a few purposes such as to buy fuel at petrol pumps, groceries at Kendriya Bhandars, and medicines. They could not be used even for trade and manufacturing.

The decision was announced at 8 pm and came into force from midnight. Policymakers believed that surprise and secrecy were necessary to catch black-money hoarders off guard to prevent them from getting rid of their illegal funds over the next four hours. However, crowds were seen buying jewelry and property. Some black money got converted into assets that could be monetized later on.

The fatal flaw in the understanding behind the policy is that black money is not just cash. There is a distinction between income and wealth. Black income generation is a process based on economic activity. If a doctor sees 50 patients and declares the payment by 30, then the money paid by the rest is black income. This is an example of under-invoicing which is routinely practiced by businesses. The savings out of this black income becomes one’s wealth which accumulates over the years.

The wealth is held in a variety of forms like, in undervalued inventory or balances held in tax havens abroad. A return is expected from this wealth. So, cash, on which there is no return, would be a tiny amount – 1% of the black wealth. Thus, if demonetisation managed to demobilize black cash, only 1% of the black wealth would have been eliminated. But, the process of generating black incomes via misinvoicing would continue.

Converting old currency to new notes proved to be easy, given the prevailing corruption. Some bankers were caught helping their rich clients do this. There was a 30% charge for this. As a result, new black incomes got generated. Deposits in Jan Dhan accounts suddenly swelled as the poor were used as cash mules. Businesses showed cash in hand to convert the old currency into new notes. Many such strategies were used for the purpose of conversion. The issue of new Rs 2,000 currency notes made it easier to hold black money.

This author had estimated in June 2017 that by January 10, 2017, 99% of denotified high denomination notes had been returned to the banks. This was confirmed by the Reserve Bank of India in August 2017. Where was the balance 1% of the currency – in cooperative banks and abroad? In other words, all the old currency was accounted for.

In brief, demonetisation neither eliminated black money nor stopped black income from being generated.

The ruling party had promised a) to root out black money and b) bring back the hoards lying abroad. During the election campaign, it said that each family in India could get Rs 15 lakh if black money from abroad was brought back. It turned out to be a “jumla” or false promise. Neither was there so much ill-gotten money abroad nor did the government know where it was nor how to bring it back.

The ruling party had to pay a political price for this exaggeration when it lost the state election in Bihar in 2015. To show its seriousness, it tried various steps to check black money, such as setting up Supreme Court-monitored Special Investigation Team, passing the Black Money (Undisclosed Foreign Income and Assets), and Imposition of Tax Act in 2015 and Income Declaration Scheme as part of the budget in 2016. None of them worked, so a big bang was needed. That was demonetisation.

Prime Minister Narendra Modi’s speech that night set out three goals: rooting out black money, eliminating counterfeit currency, and ending the financing of terrorism. They were laudable goals, but demonetisation had little to do with any of them.

As pointed out above, neither black money nor black-income generation was impacted by demonetisation. Counterfeiting continued since foreign actors are involved in it. Terrorism is financed by a variety of means, such as hawala, using dollars, and drug smuggling. As a result, none of the goals set out were achieved.

Modi, though, was so sure about himself that he had dramatically stated that he was willing to take any punishment if Indians decided that they had suffered without any cause.

Some suggested that demonetisation was ordered for political reasons – that it was crucial to winning the impending Uttar Pradesh elections. It was thought that if the Opposition lost its black-money hoards, it would not be able to campaign effectively. But, since all the money was converted into new notes, little of the illegal hoards were lost – only the premium paid.

Within days, the government realized its mistake and changed the goalpost. It argued that the move would make the economy “cashless”. This author pointed out then that becoming cashless would take a long time. The next day the goal became a “less-cash economy”. But that also had no link with the black economy. Japan with an 18% cash-to-GDP ratio has a small black economy while Nigeria with a 1.4% ratio has a large black economy. India’s cash-to-GDP ratio dropped from 12% due to demonetisation but has now reached above 14%.

The ruling party did win the Uttar Pradesh elections in spite of the suffering of the people because many of the poor bought the idea that even if they had suffered, the rich had lost their ill-gotten hoards. Politics trumped economics.

Cash to the economy is like the blood which supplies nutrients to all parts of the body. Cash circulation enables transactions to occur, which helps generate incomes. If 85% of the blood is taken out of the body and 5% is replaced every week, the body will die. Similarly, when 85% of the currency in circulation was taken out and replaced little by little over a year, the economy collapsed. If the currency had been restored within a few days, the damage would have been reversed.

But, official data showed that the year of demonetisation, 2016-’17, had the best growth rate for the decade. The reason is that unorganized sector data is not available so the GDP data uses the organized sector as a proxy to capture it. That may have been correct before the demonetisation but was problematic when the latter was declining while the former was growing. If alternative data were to be used it would have shown that the economy had gone into recession.

The long-term implications which go beyond the period of demonetisation are evident. There has been growing unemployment and an increase in inequalities leading to a decline in demand. The result has been an economic slowdown even before the Covid-19 pandemic hit in 2020.

Demonetisation was an ill-advised step that did not achieve any of its goals, even after the goalposts were shifted. But it damaged the economy no end, especially the unorganized sector. The ruling party understood this and did not showcase it as an achievement in the subsequent elections.

Demonetisation brought about a policy-induced crisis for the country, adversely impacting the marginalized sections of society – women, farmers, and workers – while doing little to curb the black economy.

First Published in Scroll.in Five years later, it’s even more clear that demonetisation was a disaster for India on 6 November 2021

Read another piece on the Indian Economy Policy by Arun Kumar titled Marginalizing The Marginalized: Supply Side Approach Will Not Work in IMPRI Insights