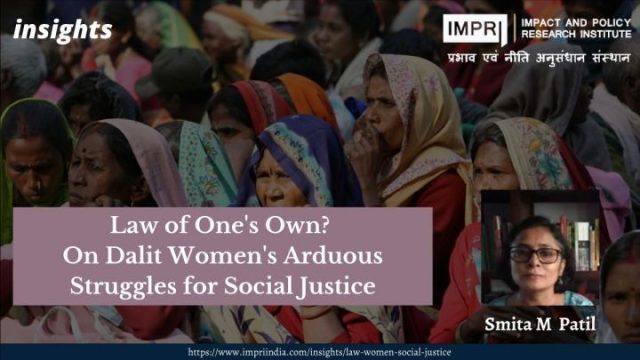 This article discusses the differential treatment of two rape cases in terms of civil society’s outrage and the process followed in the aftermath by the police and the valid questions that need to be reiterated in the context of caste–gendered structures of violence in Indian society.

Manisha Valmiki, a 19-year-old girl from Hathras in Uttar Pradesh, was gang-raped on 14 September 2020 by four upper-caste men, ruthlessly tortured, her tongue chopped off and her spine broken down. Bravely fighting to survive, she died after two weeks on 29 September 2020 in Delhi’s Safdarjung Hospital.

Renowned Dalit feminist writer Pradnya Daya Pawar raised the following questions in a social media post: “She breathed her last in the morning. Where is that India that collectively stood up for Nirbhaya? Will that India (collective India) stand up and raise its voice for this Dalit girl (Manisha Valmiki) to get justice, #JusticeforManishaValmiki”? (Translated from Marathi, dated 30 September 2020)

The upper and middle caste/class in India and the self-proclaimed feminists belonging to these categories maintained their silence. At the same time, when some of the progressive activists, as well as activists belonging to marginalized sections of society, were protesting, state governments and related institutions used law to curb such protests.

For instance, when protesters asked for permission for a peaceful demonstration while following the COVID-19 pandemic rules and guidelines, certain sections of the Epidemic Act, Disaster Management Act, and Indian Penal Code, with a punishment of up to 18 months in jail, were deployed to repress the resistance.

The mass protest that happened at Jantar Mantar on 2 October 2020 also departs from the political inertia through its concern for the rape victim. However, one needs to ponder about the rarity of anti-caste ideology inherent in various Indian political groups.

One crucial question that needs to be asked is, why after the death of Manisha was her body was not handed over to family members for the last rites? What does it convey to us? Are Dalit women an integral part of the largest democracy in the world? Where are we collectively moving towards as a society? Is this a sheer reflection of the horrendous gesture of contemporary caste schema that legitimizes Brahminical patriarchy?

Does the patriarchal-cum-patronising populist slogan Beti Bachao, Beti Padhao can address the larger questions of equality and gender justice? Or is this new idea of “new India” under the rubric of development, competent to address the accelerating pace of inequality of the marginalized sections in general and marginalized women in particular?

Does the burgeoning number of rapes and killings of Dalit women in Uttar Pradesh tell us to resuscitate the spirit of Dalit politics, the Dalit women’s movement, and the women’s movement in general? Where is the collective consciousness that needs to annihilate the vicious interlinkage between caste and patriarchy? Does this kind of brutal oppression of Dalit women signify that hegemonic-dominant feminist groups have never addressed the politics of Hindu religion in a cogent fashion?

Most feminists, liberals, and progressive sections of society have been vocal about the Hathras rape case without addressing the nuances of caste, violence, and patriarchy after the consistent critique about them by the marginalised, social movements and activists. Assertions of Dalit women are being crushed by the culture of rape in India.

Protest by upper and middle class/caste sections of society in the context of the Nirbhaya rape case created a major shift in the history of the struggles for gender justice in 2012. The gang-rape of Jyoti Singh on 16 December 2012 was brutal in nature. She was traveling with her friend on a bus which they boarded at Munirka, South Delhi around 9.30 pm the night. Six men continuously raped her and penetrated an iron rod in her private parts and left her to die by the roadside.

As a result, she had serious injuries to her genitals, abdomen, uterus, and intestines. This case brought about a huge public outcry and built-up pressure on the government to take action, which in turn compelled the government to redefine the category of rape itself.

The Justice Verma Committee was set up and a number of new, legal interventions were designed under the chairmanship of Justice Verma along with Justice Leila Seth and Gopal Subramanium.

This report dealt with various issues such as rape, sexual assault, sexual harassment at the workplace, trafficking of women and children, sexual abuse, khap panchayat, honor killings, and so on. At the same time, it recommended a ban on the two-finger test (which came under the medico-legal examination of the victim) and suggested police and judicial reforms.

Moreover, this report recognizes the vulnerability of Dalit women and the structural violence on Dalit women due to their place in the caste hierarchy. Thus, this gained the attention of various public-political formulations. Civil society, women’s groups, and many organizations also played a major role in formulating these new laws. The Criminal Law (Amendment) Act, 2013 (Nirbhaya Act) came into existence on 3 April 2013 by getting its approval from the Lok Sabha and Rajya Sabha.

The Indian media covered various forms of protest that emerged in the aftermath of the Nirbhaya rape case. Political parties with various ideologies unanimously condemned this heinous crime and demanded strict action against the culprits.

Powerful opposition, which included the Bharatiya Janata Party (BJP) and its women politicians, demanded the resignation of the Delhi chief minister at that time, the late Sheila Dikshit. Paradoxically, when Valmiki died, no statement of the elected representative women parliamentarian from the ruling party, not a single BJP woman leader came out to condemn this horrendous incident.

Ironically, the current government is most fascinating with the highest number of women’s representation of 14.4% in the Lok Sabha (Hindu 2019). India has never had this high number of women in the Lok Sabha since independence. Thus, the broader question remains about the undermining of the representation of marginalized Dalit, tribal, minority women, and also women’s movement struggles for WRB (Women’s Reservation Bill).

In addition to such caste–gendered dilution of parliamentary power, we must also question opportunist Dalit political leaders who join forces with Brahminic populism and its retrogressive ideology. Non-committal Dalit politics is central in neutralizing the Dalit political space. This kind of Dalit political crisis also indicates the failure of Dalit women leaders, such as Mayawati, who lacked the foresight to understand the disastrous consequences of having a political alliance with parties such as the BJP. Her political shift from “Bahujan” to “Sarvajan” got converted into a mere holding of political power rather than challenging the social and political conundrums of Indian democracy.

Constitutional rights and caste-based violence do contradict the day-to-day lives of Dalits and, in particular, Dalit women. Dalit women such as Bhanwari Devi, Surekha Bhotmange, Priyanka Bhotmange, Manisha Valmiki, and numerous other Dalit women across the country have never got any social justice.

The statue of Manu set up in the Rajasthan High Court symbolizes the Brahminic nature of the legal institutions. Such Brahminic mentality still looms in the mindset of upper-caste Indians.

Caste ideology and power thus have appropriated educational and legal institutions and hampered the social justice for the most oppressed Dalit women. Valmiki’s family faced a certain usurpation of their constitutional right that led to their fight for her dead body.

Another rape of a 22-year-old Dalit woman happened on 30 September 2020 in Balarampur in Uttar Pradesh in a similar fashion and upper castes burned her dead body. The media started reporting against the (fake) claims of police that Valmiki was not raped. It also reported about the medical and forensic reports from an Aligarh hospital saying that Valmiki was not raped.

The police probably forgot that she was shifted from Aligarh to Delhi’s Safdarjung Hospital for further treatment, and the hospital clearly stated that it was a case of a brutal rape. What is the role of the police in this particular case? Why did the police not file the first information report for the first eight days? Why did the police burn and bury her body in a hurried fashion and not hand it to her family and relatives?

This callous approach clearly indicates the manner in which the Brahminic state deprives the Dalit women of their rights as citizens. Thus, the casteist and patriarchal state is protecting the culprits in the Valmiki rape case.

Caste atrocity in Khairlanji, Maharashtra also reminds us of the injustice perpetrated on the basis of interlinkages of the abhorrent forms of caste and gender. Priyanka Bhotmange and Surekha Bhotmange were brutally raped and murdered on 27 September 2006.

Valmiki was also raped and murdered in the same month in 2020. Both these caste–gender atrocities in  2006 and 2020 in rural areas indicate the persistence of unchanged, macabre violence against Dalit women.

The rape conviction in India is problematic in nature. In the Nirbhaya rape case, the four culprits were hanged to death in March 2020. Once this judgment arrived, the Indian society started celebrating as such stringent punishment would create fear psychosis among the culprits.

However, such punitive cultures cannot understand the larger dimensions of rape in the context of women in general and Dalit women in particular. Burning the bodies of rape victims is central to the history of the oppression of women and the Dalit women in addition to such legal measures. Have these legal transformations changed the trajectory of Dalit women’s right to justice?

When the Khairlanji atrocity happened, the ruling parties in Maharashtra were Congress and Nationalist Congress Party. Does the shift from one political party to another make any difference in the life of Dalit women/girls?

The answer is no. Certainly, the role of the state, political parties, people who are affiliated with political parties, and their obsession for a position within the political power structure needs to be interrogated along with the caste, class, gender, and regional dimensions that determine public patriarchy. In fact, many Dalit women provoke us to think about the possibilities and the necessity of separate laws for Dalit women.

Even in the midst of COVID-19, the atrocities on Dalit women raise serious questions regarding the Brahminic and gendered nature of political institutions and their anti-Dalit women approaches. Dalit women question and thus pose a challenge to the hegemonic Indian feminist and political articulations.

Global feminism is facing the challenge of intersectional and glitch feminism. Right-wing across the globe is gaining political momentum in the era of autocracy. However, questions that are central to the rape of Dalit women force us to think beyond the new forms of social controls and aspirations related to social change in the era of a neo-liberal phase of the capitalistic, Brahminic state and its withdrawal from the social welfare and rights-aspirations for the social justice of Dalit women.

First, published in EPW Law of One’s Own? On Dalit Women’s Arduous Struggles for Social Justice on 27 March 2021