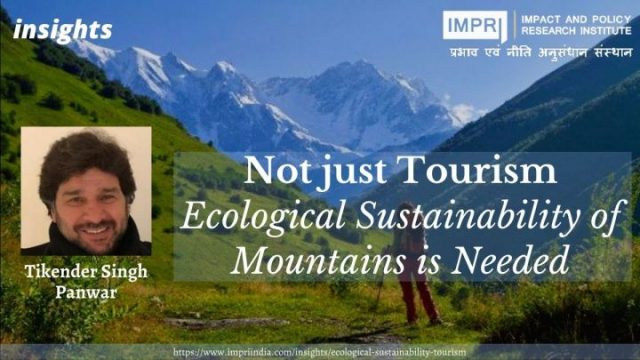 “Sustainable tourism”  is the theme for ‘World Mountain Day,’ observed across the world on December 11.

The United Nations’ call for this year’s theme is quite apt. Though it also shows the limitation of understanding the mountains in the larger context. Are mountains only for tourism?

While mountains worldwide attract a reasonably large number of tourists, considering them just as hotspots for sustainable tourism is not the right approach to looking at them. They are large ecosystems so profound in the sustainability of our existence.

The major mountain range in India, the Himalayas, proves this beyond doubt. Millions of peoples’ lives depend on these ecosystems; it is not enough to just focus on preserving them; the restitution of nature is also direly desired.

WHY ARE THE HIMALAYAS IMPORTANT?

The Himalayan range is bordered on the northwest by the Karakoram and the Hindu Kush ranges, on the north by the Tibetan Plateau, and on the south by the Indo-Gangetic Plain.

The mountain ranges of the Himalayas, the Hindu Kush, and the Karakoram span 2,400 kilometers across six nations and contain 60,000 km² of ice – storing more water than anywhere besides the Arctic and Antarctic.

Almost 33% of the country’s thermal electricity and 52% of hydropower in the country is dependent on the water from rivers originating in the Himalayas. These rivers receive a significant part of their water due to the melting of ice glaciers, making them an indispensable part of India’s energy security.

Himalayas play a role in the monsoon. Tibet plateau heats up in the summers creating a low-pressure area that leads to southwest monsoon winds coming to the Indian subcontinent.

It also modifies the route of the winds. In the east, the winds turn along the mountains in the northeast and move along the Brahmputra-Ganges plains, distributing rainfall.

Himalayan glaciers are the lifeblood of not just the water security needs of India but also for India’s energy security.

The impact of climate change is evident in this region as well- Impact is visible on precipitation patterns and melting of glaciers. As stated, the Himalayan glaciers feed seven of the great rivers of Asia – Ganga, Indus, Brahmaputra, Salween, Mekong, Yangtze, and Huang.

Glaciers in the Himalayas lost billions of tons of ice between 2000 and 2016, double the amount between 1975-2000, as per studies. Mountains are indispensable, and so is the need for their restitution. We have seen over the years how extreme weather events have led to vast landslides and even flooding in the mountains.

Unfortunately, mountains are treated only as tourist destinations without realizing that over-draining resources beyond a point can be disastrous.

The theme of sustainable tourism may sound good, but mountains’ sustainability as an ecosystem must be revisited.

Coming to India and especially the Himalayas and the hill towns built by the British, an argument often heard is that the British kept the mountains safe, and we, in post-independent India, have ruined them. This is erroneously wrong.

A general understanding of British engineering can be made that their technology and skills sustained the mountains. Still, the fact remains that the local communities living before the advent of the British to the mountains barely built structures or lived on the ‘ridges’ and hilltops. It is the British who, with their mighty engineering skills, built these large hill towns like Shimla, Mussoorie, Dalhousie, etc.

The British taught us how to ruin the mountains, but of course, in a “sustainable” form. For example, Shimla, the erstwhile capital of colonial India- quite an intriguing town for urban planners. The water supply initially to the town was ensured from nearby water catchment areas like Seog forests, which was piped in gravity form from the forest springs to the town.

Later, a lift water scheme was installed as the population grew. This scheme from Gumma had an elevation of nearly 2,000 meters to pump water which was then distributed in the town.

The British could sustain such a system because of its imperial loot. Still, it is extremely difficult to run such a system without subsiding it with such high operation and maintenance costs.

Hence this argument that the British built towns and made them sustainable is incorrect.

But the land-use change and change in employment patterns also need to be studied closely. Why? For the simple reason that Leh town which used to consume drinking water from the natural source of water flowing from the glacier and underground bores cannot do so. The water is unfit for drinking purposes, and the shift from dry toilets to wet flush toilets for tourists has contaminated the water. These are not sustainable forms of tourism for long.

A few crucial lessons must be learned to ensure that the least damage is done to the mountains, especially the Himalayas.

Hence, this “Sustainable Tourism” pledge will be meaningless unless the mountains are sustained as an ecosystem. Restitution and not restoration should be the slogan.

First published in News Click Sustain the Ecology and Environment of the Mountains; Not just Tourism on 18 December 2021.