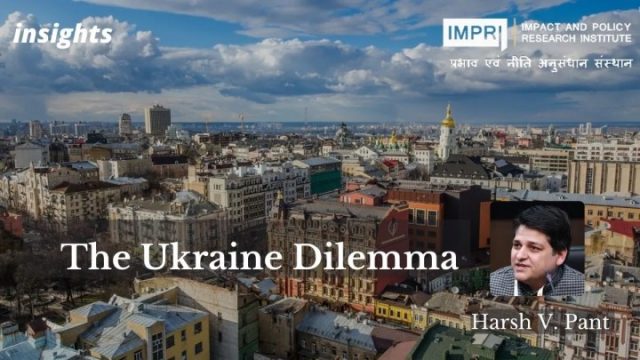 Russia and the West continue to jostle over Ukraine. Eerily reminiscent of the geopolitical tussle during the Cold War, major powers are busy competing over the future of Ukraine while the voice of Ukrainians. Ukraine has become the battleground that is likely to shape the future security architecture of Europe.

The tension between the West and Russia is, therefore, much more profound than simply the fate of Ukraine. It is the future of the geopolitical mapping of Europe that is at stake in the game of brinkmanship that the world is witnessing.

There are claims from Washington that Russia has established 70 percent of the military build-up it needs to launch a full-scale invasion of Ukraine and that as many as 50,000 civilians and up to 25,000 Ukrainian soldiers might get killed in the eventuality of an invasion. Russia has dismissed such reports as “[m]adness and scaremongering”. Ukraine, too, has been downplaying the Russian military build-up.

Diplomatic channels, however, continue to work with two key European leaders, France’s President Emmanuel Macron and the German chancellor, Olaf Scholz, reaching out to both Moscow and Kyiv in a bid to calm the tensions. Macron has called for a “new balance” to protect European states and satisfy Russia, underlining that it is legitimate for Russia to raise its own security concerns.

France has been calling for a reset in Europe’s ties with Russia for some time now and has been asking the European Union to reach out to Moscow independently of Washington. But with NATO relying largely on American hard power and the differences within the EU on how to move forward, the capacity of Brussels to influence ground realities remains largely confined to diplomacy.

On the other side, Russia’s relationship with China is strengthening with the two galvanizing their partnership to take on the West. Vladimir Putin’s visit to Beijing to attend the Winter Olympics made him the first leader of a major global power to meet the Chinese president, Xi Jinping, in person in the last two years. During the visit, the two leaders issued a joint statement that expansively described their bilateral relationship: “Friendship between [Russia and China] has no limits, there are no ‘forbidden’ areas of cooperation.”

In the statement, there were accusations against NATO for espousing a Cold War ideology, concerns about the AUKUS pact involving Australia, the UK, and the US as well as Moscow’s support for Beijing’s One China policy, reiterating its opposition to “any forms of independence of Taiwan”.

There was support for enhancing Russia-China economic ties, including a gas deal involving Gazprom to increase exports to China from 38 billion to 48 billion cubic meters a year. While Ukraine was not mentioned, the two nations made their intent amply clear: “Russia and China stand against attempts by external forces to undermine security and stability in their common adjacent regions, intend to counter interference by outside forces in the internal affairs of sovereign countries under any pretext… and will increase cooperation in the aforementioned areas.”

The Crimea crisis in 2014 saw Beijing offering economic and diplomatic support to Moscow as the West coalesced around isolating Russia. Chinese support is now critical for Russia to not only manage the West but also for its global standing.

The more the West isolates Russia, the closer the relationship between Moscow and Beijing will grow. These great power politics poses enormous challenges for a country like India. So far, New Delhi has tried to maintain a semblance of balance but it remains unclear how sustainable that is going to be if the crisis escalates.

India abstained from the procedural vote to discuss the situation on the Ukraine border at the United Nations Security Council. New Delhi can’t do much to shape the trajectory of the conflict on the ground but whatever the end result of this crisis, its implications for Indian interests will have to be assessed carefully.