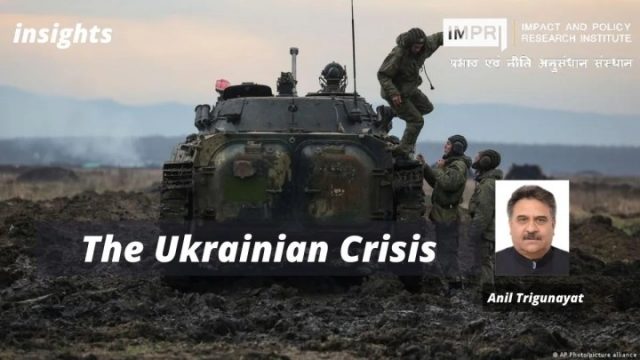 Whenever I look at conflict zones like the ongoing Ukraine crisis, I am reminded of the iconic Bollywood film ‘Mughle Azam’ regarding the plight of legendary Anarkali – an ordinary but legendary courtesan, whom young Prince Salim loved and his father Emperor Akbar hated just because of this. Akbar threatened her ‘Salim will not let you die and I will not let you live. Apply that to poor Ukraine stuck between the mountain and the hard rock. Let us not kid ourselves this conflict is not between Moscow and Kyiv.

It is the geopolitics at its worst between the Russians and the West led by the Americans. Chinese by their hegemonistic ambition have further complicated the current international disorder. The disintegration of the Soviet Union, which the US and others enjoyed with alacrity, did not only end the Cold War 1.0 but humiliated the proud Russian people a great deal. In this lay the seeds of enmity and competition between the US and successor state Russia – with down but not out syndrome.

Gorbachev-Yeltsin and others tried hard to be friends with the Americans and naively expected to get integrated into the European and western network but got disenchanted much faster than others. James Baker even assured the naivety of the time that Russia’s security interests will not be compromised by NATO’s eastward expansion which of course appears to be a ‘slip of the tongue ‘since the expansion of NATO continues apace.

Ukraine is a redline Russians don’t want to be crossed as it will be the last bastion of a buffer zone which may not be friendly but can be tolerated, if neutral. But words or agreements have no meaning as we have seen Comrade Trump reneging on nearly everything as the hyperpower straddled along. In this Tehran and Moscow are being simply naïve. History is harsh but has lessons if we are willing to learn. At best these demands could be negotiating tools and refuge to revert to the status quo.

Then Russia got Putin, a sleuth and a strategist driven by the Slovniki, as its PM-President-PM-President cycle and may even continue until 2036. Well, he simply does not trust the Americans as he tried to salvage the Russian or so to say Soviet-era pride where brute power equilibrium will reduce the chances of a real war and where spheres of influence are often conceded. And the power tussle continues. An old saying ‘enemy’s enemy is a reliable friend’ explains the Sino-Russian bonhomie. Besides too many hegemons are a crowd hence conflict is a given and diplomacy gets short shrift even if there are pretenses of it galore.

Even as Europeans, Biden-Putin, Blinken-Lavrov are clinking phone lines and clocking air miles Russia, by a show of force amassing thousands of troops on its borders with Ukraine, is hoping for an unrealistic outcome in the form of some legal guarantees from Biden and company with regard to Ukraine and Georgia and of course Belarus – its perceived white Russian European identity and periphery  –never to be admitted to NATO, etc. One may argue that this expectation is extraneous and unachievable in the medium term, and unfair to the countries in between, even if this time round some understanding is reached among the superpowers simply to avert the war.

No one wants the war, so they say, but if it happens so be it. Power flexing and troops massing on all sides is going on. More than that verbal duel is so acrimonious that on the surface one would be worried that war is inevitable and can happen at any moment. Costs are huge for Russia and the Europeans even if the American deep state may convince President Biden that his sagging popularity ratings and chances in the congressional elections might be improved hoping perhaps the American nationalism and patriotism will shore that up. Well that’s a long shot since there does not seem to be an appetite for another war.

From Putin’s perspective invasion does not make sense as it has already got the strategic Crimea in 2014. For simply stating that the poor German Naval Chief during his visit to India lost his job. Ukrainians will suffer a great deal but will Moscow be able to handle and hold the occupation for too long given the grass-root resentment is a gaping question. As yet Putin does not seem to want to stay in a conflict zone more than necessary. Afghanistan is an example for both Moscow and Washington DC of what lies ahead.

In wars today there are no gainers and winners -everyone loses. But of course, both need conflicts to keep their military-industrial complex going. Would they be interested in trying those weapon systems to their own detriment only time will tell?  Europeans will suffer from the disrupted gas supplies and being in the line of fire and excruciating winters that have been proven fatal in the past. Russia will lose much too.

For Ukraine being the battlefield will be disastrous. And the Chinese Panda will smile as it will get a fully motivated and cornered Russia as its truly strategic partner as the Cold War 2.0 with hot flashes rages on. Ongoing west boycotted the Chinese winter Olympics, where President Putin was the chief guest and the Joint Statement issued after the Xi-Putin meeting says it all.

It’s is high time that the two sides wake up to realistic expectations (Russia from the USA) and genuine security concerns (of Russia) without sacrificing the Ukrainian sovereignty. Let us hope sanity prevails.