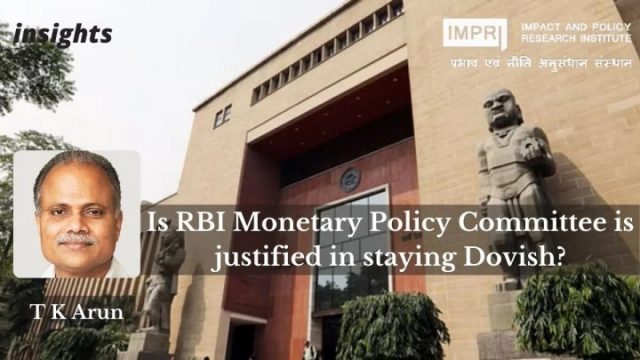 The MPC’s decision to keep repo rates unchanged reflects the RBI’s belief that its ongoing normalization of liquidity and sale of dollars that adds to the removal of surplus liquidity pumped in to insulate the economy during the pandemic’s worst times, would be adequate to raise yields without the central bank raising policy rates

The Monetary Policy Committee (MPC) of the Reserve Bank of India (RBI) has maintained the status quo on policy rates and stance of monetary policy. A lone vote of dissent attended on the decision to retain the stance of monetary policy as accommodative, while other elements of the Monetary Policy statement enjoyed consensus among MPC members. The MPC decisions are appropriate for the needs of the economy at the current juncture.

Some have expressed the view that the MPC has been a little too eager to toe the government’s line and has chosen to dilute the risk of inflation while refusing to increase policy rates at a time when central banks around the world are bidding farewell to easy money. This ignores the reality that the Indian economy operates in a world of capital flows and that India is slated to witness a rise in yields in the short run, whether the RBI wills it or not.

The US Fed has declared its intention to raise rates. While markets tend to price in expected changes without waiting for these changes to materialize, such pricing in is never complete. So, when the Fed does raise rates — up to five times this year, according to Goldman Sachs — the impact of those rate hikes will ripple through the world, particularly it’s emerging part.

India will see some capital flight, as some portfolio flows relocate to their home countries, where the risk-free rates of return would have gone up, following the Fed rate hikes and likely rate increases by the European Central Bank and the Bank of England.

Some weakening of the rupee might be considered a good thing, as a lower rupee is widely perceived as being helpful for boosting exports. However, a lower-than-warranted rupee would make imports more costly than they need be, and sharpen inflation. At the same time, it would make servicing foreign debt more onerous. So, the RBI has an incentive to keep the rupee’s depreciation following capital flight in the wake of inevitable Fed rate hikes limited.

That means selling dollars from the RBI’s reserves, of which it has plenty. After peaking at $642.5 billion in September 2021, India’s reserves have come down to $629.8 billion as of January 28 this year. When the RBI sells dollars to increase the supply beyond what forex dealers have from their current operations, that sucks out the rupee liquidity.

In other words, the smoothening out wild fluctuations of the rupee’s exchange rate that would be necessary consequent on Fed tightening would add to the absorption of liquidity that the RBI has been carrying out of late. Over January 24-30, the RBI took out ₹9,03,391 crore from circulation, through assorted liquidity operations, according to the RBI’s Weekly Statistical Supplement. Reduction in forex reserves by $12.7 billion from their peak level sucked out about ₹95,250 crores.

What the MPC’s policy stance shows is that the RBI believes that its ongoing normalization of liquidity and sale of dollars that adds to the removal of surplus liquidity pumped in to insulate the economy during the pandemic’s worst times would be adequate to raise yields without the RBI formally raising policy rates, at least for now.

The RBI expects the economy to grow 7.8 percent in 2022-23, with annual inflation in consumer prices of 4.5 percent. The government has assumed a nominal growth rate of 11.2 percent in its budget calculations. If the economy grows 7.8 percent in real terms, the nominal growth rate of 11.2 percent would mean a GDP deflator of 3.4 percent. That means normalization of price changes in general, which would bring the GDP deflator below the rate of increase in the consumer price index.

When the moratorium on recognizing bad loans comes to an end and companies are forced to service loans, there would be additional strain on banks. Any sudden rise in policy rates, accompanied by any sharp dip in liquidity would create a strain on the entire banking system, in addition to hampering economic recovery and raising the government’s own cost of borrowing.

There is yet another factor to be borne in mind while evaluating Monetary Policy Committee decisions. The RBI has lots of liquidity management tools up its sleeve, apart from the policy rates determined by the MPC. It does assorted liquidity absorption operations, Operation Twist to smoothen out the yield curve, and intervention in the currency market.

The RBI governor has made it clear that the central bank would like to place greater reliance on the variable rate reverse rate window for managing liquidity. This allows the market conditions to be better reflected in liquidity management operations.

On balance, the economy’s capacity to grow remains robust, with capacity utilization growing but nowhere near full. While enhanced government expenditure, including capital expenditure, would crowd in private investment, and generate additional demand, the result should be to create additional output rather than to inflate prices. The RBI, too, would seem to share the government’s optimism that disruption owing to the pandemic is largely behind us. This is not unrealistic.