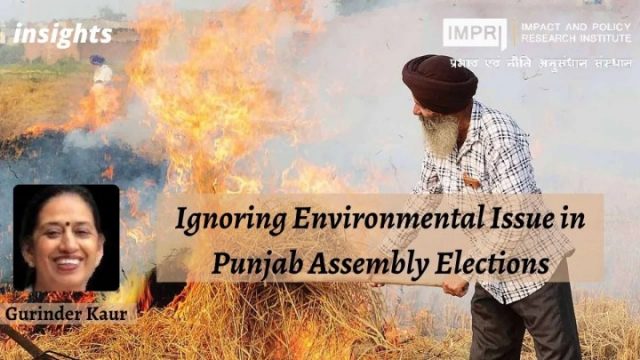 The main purpose of the Assembly elections is to elect leaders for any state of the country who will protect the basic rights of the people there and meet their basic needs. The issue of a clean environment, the most basic requirement for living a healthy human life, is missing from the election campaign. So far no political party has touched it.

If we take a look at the background a little bit, we will easily remember that our grandmothers used to throw money at any water source and bow down, but now they have wastewater of industrial units containing chemicals and sewage water is being dumped indiscriminately in water sources. Our religious texts also use highly revered words for natural resources like Pawan Devta (God of Wind), Jal Devta (God of Water), Agni Devta ( God of Fire).

In the 15th century, Guru Nanak gave these natural resources the same status as Guru, Father, and Mother, saying, “Pawan Guru Pani Pita Mata Dhrat Mahat.” Our forefathers knew that natural resources are precious. These resources can only be saved, not created. So they used them very carefully.

Sadly, in the blind race of economic growth, we have begun to pollute these natural resources instead of worshiping, honoring, and conserving them, and have forgotten that by breathing in polluted air and drinking polluted water, we are inviting a number of horrible diseases.

Rainfall in January and February is above-average and it is a known fact that rainfall clears the air and pollutants settle down on the earth. According to a 2019 report by World Air Quality Report, six cities in Punjab were among the 50 most polluted cities in the world. According to the 2021 annual report of Down to Earth and the Center for Science and Environment, Punjab had 41090 deaths due to air pollution in 2019 which is 18.8 percent of the total deaths.

Air pollution is seriously affecting the health of the people of Punjab, but no political party is talking about this issue, not even AAP Supremo Arvind Kejriwal, whose party is in the election fray in Punjab. He has also made no promises on the environmental issues while he is blaming Punjab, and Haryana for the rising air pollution in Delhi every year. If the smoke from Punjab and Haryana can pollute the air of Delhi, then how can Punjab avoid that pollution?

After air, the second basic human need is water. Guru Nanak had given air the status of Guru and water the status of the father. Highlights the importance of water, it is written in Gurbani, “Pahila Pani Jiu Hai Jit Harya Sabh Koi”. Water is the most valuable resource of nature on which all kinds of organisms (flora, fauna, and human beings) live. If there is no water then there cannot be any kind of vegetation (fruits, flowers, grains, etc.).

If there is nothing to eat then no life on earth is possible. This second resource of nature in Punjab is rapidly declining and becoming polluted. Groundwater in more than half of the districts of Punjab is contaminated by arsenic, uranium, cadmium, and lead.

A report by the Water Resources and Environment Directorate, Water Resources Department, Punjab, Mohali, and  Central Groundwater Board North Western Region, Chandigarh has revealed that the groundwater level in Punjab is falling by 0.37 meters per year. Out of 139 development blocks of Punjab, groundwater in 110 development blocks has gone very deep, due to which they have been declared as Dark or Gray Zones.

The ‘New Agricultural Technology’ which was imposed on Punjab to meet the food shortage in the country is responsible for the declining groundwater level in Punjab. Chemical fertilizers and pesticides have been widely used for new agricultural technology.

Through excessive use of chemical fertilizers and pesticides, Punjab has met the food shortage of the country, but it has drastically polluted the air, water, and land of Punjab. Only 0.01 percent of the pesticides that farmers spray on crops reach the pests and the remaining 99.99 percent pollutes the air, water, and soil by being absorbed into our environment.

These chemical fertilizers and pesticides are later entering the body of the people of Punjab through foodstuffs causing them to suffer from various horrible diseases. It is no secret that the Malwa region, once known as the Cotton Belt, is now known as the Cancer Belt.

The saddest fact of Punjab’s water pollution is that the rivers (Panj Abs) that gave it its name, today it is just a name. Since the partition of India in 1947, only two and a half rivers have been flowing in Punjab.

These include Sutlej, Beas, and a part of Ravi. The Ravi river flows through a small part of the Punjab — Gurdaspur and Pathankot districts. The Beas flows in good condition, but in 2018 a large number of fish died due to the release of molasses from Kiri Afgana Sugar Mill molasses from the Kiri Afgana sugar mill.

The water of the Sutlej river has become very polluted. The tragedy of the Sutlej river begins with the Bhakra Dam as very little water is being released into the river after the dam, due to which  Sutlej is losing its very existence as a river. Even more tragic is the fact that all the tributaries of  Sutlej have been turned into a sewer by dumping chemical-rich effluent from industrial units.

This polluted water of the river is spreading various diseases like cancer, jaundice, etc. among the people living on its banks. Thus the river Sutlej is dying untimely due to the negligence of the government.

The environment of Punjab has become highly polluted which has polluted the air, water, and land of Punjab. Now it is time to save the environment here as the people of Punjab are suffering from various horrible diseases due to this increasing pollution. The problem of pollution of air, water, rivers, etc. at any place is not a new and unique phenomenon.

Six decades ago, the United States of America, Canada, and many countries of Europe were badly affected by air and water pollution as a result of unplanned industrial development. They have overcome it now. Political parties contesting elections in Punjab are completely silent on the issue of polluting the environment of Punjab, whereas political will is required to clean the polluted environment of Punjab.

The ordinary people of Punjab have not paid any attention to this issue yet. Therefore, it is now the duty of the people of Punjab to make it an issue in the Assembly elections. They should state to the various political parties that they will win their respect and votes only if they pay more attention to environmental issues.

Clean water, air, land, and sanitation are basic human needs that the government has a duty to provide to the general public. This is the best time for the general public to alert the political parties for improving the environment of Punjab.