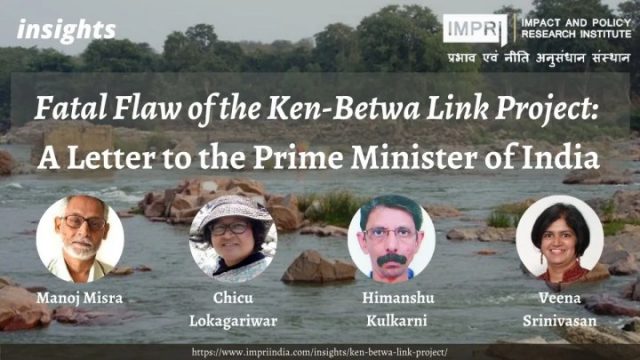 Please allow us to bring to your kind attention the incomplete and wrong facts that have been placed before the cabinet committee headed by you, which cleared the Ken-Betwa Link Project on 8 December 2021. Some glaring facts, it seems, have also been hidden from you. We, the undersigned, submit this in response to your encouragement to fact-based criticism.

In this submission, we quote only from the findings of the Supreme Court-appointed Central Empowered Committee (CEC) so that bias, if any, on our part in the matter could be avoided. According to the CEC, the approval of standing committee (SC), NBWL for diversion of 6,017 ha [hectare] of wildlife habitat for implementation of the Ken–Betwa Link Project Phase I has not been proved to be necessary for improvement and better management of the wildlife therein as provided in Section 35(6) of the Wild Life (Protection) Act, 1972.

The finding, as above, by the CEC, highlights that the wildlife clearance by the standing committee, the National Board for Wildlife (NBWL), was in the teeth of the Wild Life (Protection) Act (WPA), 1972 and hence illegal.

Nothing of this kind has been done and hence the said wildlife clearance is also illegal as it violates Section 29 of the WPA. On this, the CEC states: “impact of the project on the downstream Gharial Sanctuary and the vulture nesting sites have not been examined by the standing committee, NBWL and no mitigative measures in this regard are forthcoming in the recommendation of the standing committee, NBWL.”

So, the very fact that the wildlife clearance accorded to the project by the standing committee, NBWL is not permissible by law should have been considered as a sufficient and determining factor against the project as proposed, and the project should have thus been rejected by the cabinet committee.

How can a project, which runs foul by the law of the land, be allowed to go ahead? Also, the case in question is still sub judice at the Supreme Court. Obviously, these facts have been hidden from the cabinet committee headed by you. Kindly recall your message given to the nation on 29 July 2021 (International Tiger Day), which “reiterated the Indian government’s commitment to ensuring safe habitats for the species and nurturing their habitat and ecosystems.”

Obviously, the cabinet committee has not been briefed on how the proposed dam on the Ken river, in the heart of the PTR, shall sound a death knell for the tigers’ future in Panna by compromising their habitat for all times. In this respect, the CEC report has the following to say:

(a) no developmental project should destroy the ecology of remnant fragile ecosystems and important tiger habitats in the country. ln, an ideal situation, it would be best to avoid these projects in such wilderness areas with protected area status and specifically when it runs the risk of providing justification or unhealthy precedence for more such developmental projects within the protected areas that will not be in the interest of wildlife and the overall wellbeing of the society in the long term;

(b) the present proposal may not be the best possible option for addressing the livelihood and development of the region using water resources from the Ken river. Obviously, the above facts that gravely threaten the tigers’ future have not been brought to your notice.

We are sure that, if informed, you would never have approved the project. Experts like Brij Gopal, Dinesh Kumar Marothia, and others have made a strong case to suggest that much cheaper, faster, and sustainable alternatives to the project are available for the people in the Bundelkhand region in whose name the Ken–Betwa link project is being pushed.

With thousands of Chandela and Bundela period tanks spread all over Bundelkhand, but unfortunately in disuse today, there is a strong case to focus on their rejuvenation for the region’s water security rather than promote costly, long gestation, and result in uncertain megaprojects like the present one.

According to a 2016 publication by Brij Gopal and Marothia: Restoring large tanks and village ponds must be accorded high priority. For centuries, village communities managed them as common-pool resources. In recent decades, however, they have degraded due to weak property rights relations, institutional arrangements, and a breakdown of local authority systems, whether they be community-based organizations, local resource users’ groups, or village panchayats.

Property rights/tenure security can effectively influence incentive structures for sustainable use of the commons, and appropriate property rights and an institutional hierarchy have to be established to restore and manage common waterbodies under the MOWR’s RRR (repair, renovation, restoration) scheme and Pradhan Mantri Krishi Sinchayee Yojana.

Several successful farm pond schemes are already in operation in the Bundelkhand region. These can be upscaled over the entire region with suitable government support and schemes. Also, the region receives more than 1,100 mm of rainfall annually, and there are many examples in the country where village communities with less than half of this rainfall have been able to create water security by harvesting local water through watershed development and demand management.

The above fact has been endorsed by the CEC report: “the alternative to the main objectives of the project proposal of irrigation and alleviation of poverty has not been examined by the project proponents.” It is also a fact that Ken river, which turns into pools during the summer months, has never carried the kind of water that its hydrological assessments claim to possess.

With the above real facts about the project, as endorsed by the CEC of the Supreme Court, we request you to kindly direct a recall of the cabinet committee approval granted to the Ken–Betwa link project and reject the same in favor of an alternative, which would be much more time- and cost-saving as well as would save the integrity of the PTR and safeguard the tigers’ future.

We are sure that your vision and commitment for ensuring safe habitats for the tigers and nurturing their habitat and ecosystems shall convert the proposed lose-lose proposal of the Ken-Betwa Link Project into a win-win proposal both for the tigers and the local people in the Bundelkhand region. We shall be happy to clarify any queries in this regard.

First Published in The Economic & Political Weekly The Illegality of Ken–Betwa Link Project: Letter to the Prime Minister of India on 5th February 2022

Read another piece on Forest Survey by Manoj Misra titled Why Does The Forest Survey Disappoint Everyone, Except Forest Ministry? at IMPRI insights.

Veena Srinivasan, former forest officer and Senior Fellow at the Ashoka Trust for Research in Ecology and the Environment (ATREE), Bangalore.