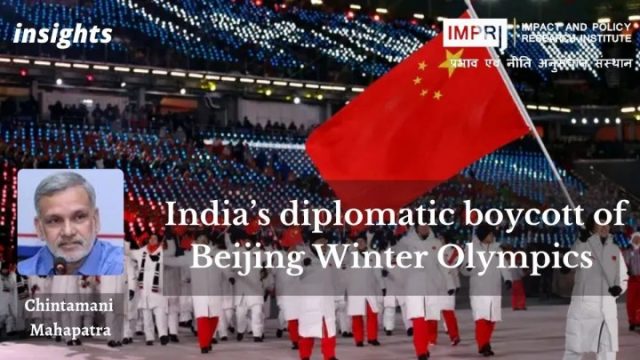 By not only diplomatically boycotting but also not telecasting the event in the country, India has expressed its disapproval of Chinese behavior in available sturdiest terms

Many Western and Oriental countries had announced their diplomatic boycott of the Beijing Winter Olympics from 6 December 2021 onwards and India was the last country to do so a day before the opening ceremony.

India’s decision was not related to the decision of the United States, Canada, European countries, or Indo-Pacific countries, such as Japan, Australia, and New Zealand. No single country provided the leadership and coordinated an international boycott of the Beijing Olympics.

It is understood, however, that some countries’ decision was inspired or encouraged by the decision of the Biden Administration to send a message to China and sensitize the international community about the flagrant violation of human rights by China in Xinjiang, Hong Kong, and elsewhere. The issue was not just the violation of the civil rights of people but the alleged genocide of Uyghur minorities by the Chinese government.

Some countries took the decision on a diplomatic boycott on the ground of the prevailing COVID-19 pandemic and safety considerations. Athletes were advised not to carry their personal electronic gadgets and use burner phones for fear of losing their privacy and personal information.

All the above arguments also reflect a wider perception of the authoritarian character of the Chinese polity; and the apprehension that if their government mistreats the Chinese people, could the foreigners be safe, especially if they are liberals in China?

The number of countries that have decided against the diplomatic boycott is certainly large, but those that have done so include political and military heavyweights. While the United States and other powerful countries have refrained from persuading other countries not to send their high officials to Beijing, China appears to have cajoled, pressured, bribed, or threatened many countries against supporting the US and its allies.

Significantly, the Chinese government has sharply reacted to diplomatic boycott by some countries alleging “political manipulation”, threatening to impose a “price” on the boycotting countries and using abusive language; particularly against Australia saying Canberra’s decision was “immature, arrogant and stupid”.

India actually did not side with the decisions of other countries, but when China declared that a PLA soldier involved in the Galwan Valley incident would be one of the torchbearers, India found a stronger reason to protest and announce its diplomatic boycott.

New Delhi’s decision, however, should not be taken as a figurative step. It was an open demonstration against Chinese military muscle-flexing and violation of the territorial integrity of neighboring countries.

Unlike other countries, India did not stop at just diplomatically boycotting the event, DD TV channel also resolved not to telecast the opening and closing ceremony of the Beijing Olympics.

This is not the first time that select countries have boycotted the Olympics. Even China has earlier done so a few times. In the future too, such occurrences will be witnessed. Political leaders of some countries have argued that sports events should not be politicized. But these are only pious thoughts. In reality, all games and sports events have their own internal politics and external political developments do exert influence as well.

In the past sports events were part of conducting diplomacy. One of the quintessential examples was the Ping Pong diplomacy between the United States and China. Cricket at one time played a role when an attempt was made to restore normalcy or protest against a Pakistani policy/action in India-Pakistan relations. As far as Olympics are concerned, Charles Wu has argued: “…for the first eight decades of the Games’ existence, efforts to boycott the Olympics emanated almost exclusively from the oppressed peoples — and were met with ferocious condemnation from the US and its allies”. This time the story is somewhat different.

If Russian President Vladimir Putin has thrown his weight in favor of Chinese President Xi Jinping and criticised the politicization of the Olympics, there is a clear political or strategic pointer here. If French President Emmanuel Macron opposes the politicization of the Olympics, he has his own political intention to do so. If the Biden Administration has diplomatically boycotted Beijing Olympics but continues to encourage the American athletes to perform their best, there is a political-economy angle there.

It is common knowledge that boycotting the Olympic games will have no impact on the behaviour of the Chinese state. Human rights records in Xinjiang or Hong Kong are not going to improve and things may actually degenerate further.

Does it mean that the decision by many countries to diplomatically boycott the Beijing Olympics is a hollow and worthless exercise? The way sanctions are used as a diplomatic tool by some countries to counter certain policies of other countries in spite of the awareness of their weaknesses and ineffectiveness, boycotting mega-events, such as Olympics have their own relevance in international relations.

It is also well known that UN resolutions are hardly backed by force, yet strong messages are sent to countries through such resolutions from time to time. The best way to judge the weight and significance of the diplomatic boycott of the Beijing Olympics is to pay attention to the reaction of the Chinese government. It was frantic and furious!

By not only diplomatically boycotting but also not telecasting the event in the country, the Government of India has expressed its disapproval of Chinese behavior in available sturdiest terms. This has surely some ramifications and is certainly an appropriate measure to emphasize Chinese muscle-flexing activities and flouting of international law and norms.

This article was first published in the first post as India’s diplomatic boycott of Beijing Winter Olympics: Relevance and significance on 12th February 2022