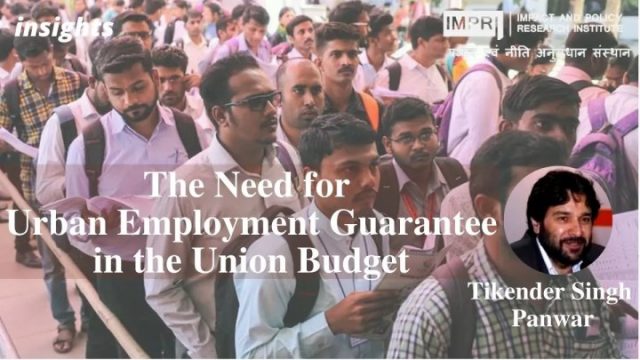 There is widespread traction for an urban employment guarantee scheme, similar to the Mahatma Gandhi National Rural Employment Guarantee Act (MGNREGA), in the urban spectrum. This demand comes not just from youth organizations but also from workers’ unions and sections of the industry like the Confederation of Indian Industry (CII). It is pertinent to mention that many groups and individuals in the country have raised this demand in the last few years, including urban groups, university research teams, etc

Even the Parliamentary Standing Committee on Labour in its report, dated August 3, 2021, said that it is imperative to put in place an ’employment guarantee program’ for the urban workforce in line with MGNREGA.

The government has not given much heed to it; however, this year, following the massive erosion of employment both in the informal and formal sector in the urban areas, there is a louder cry for pronouncing an urban employment guarantee act. This must be taken up seriously in the ensuing union budget.

Urban jobs have seen a complete transition in the past few decades, particularly in the last eight years. The unorganized sector employs more than 85% of the workforce, and they enjoy the least statutory benefits under the given rule. The informal nature of employment in urban areas makes the condition of employment more anti-worker.

There has been a consistency in unemployment in India’s towns and larger cities. Since 2016, the unemployment rate has been between 7% to 23%; after the lockdown was announced in March 2020, there was a meteoric rise. But even as the country has opened up after lockdowns, the jobs have not returned.

A cursory look at the report from various newspapers in 2021 highlighting the employment situation is enough to explain the precarious nature of employment.

Once again, five million people lost jobs in October 2021. Though the total number of people employed in India was about 400.77 million in October 2021, according to the Centre for Monitoring Indian Economy (CMIE), the labor participation rate was, however, low- 40.41%. In simpler terms, those who lost jobs in April-May did not get jobs until October 2021.

Nearly six million jobs were lost in November 2021. Though the unemployment rate decreased slightly than the previous month, the labor participation rate also decreased. More people lost jobs this month, and both the formal and informal sectors were affected.

In urban areas, the impact was more disastrous. The share of urban work dropped to 31.6% in 2019-20 and further fell to nearly 31.2% in November 2021. There is a rapidly declining urban work, and even the jobs provided in the given period are more vulnerable.

In December 2021, India had 53 million (5.3 crores) unemployed, which is more than the population of many European countries. This is a huge number, which, if provided with work, can build assets for the society and community by large.

Youth unemployment was more precarious. In a survey in July-September 2020 post lockdown, the open unemployment for the age group 15-29 was 34% (females) and 25% (male).

Finding employment for women is more difficult in an already declining job market. World Employment and Social Outlook report by the International Labour Organisation (ILO) in January this year said women’s employment-to-population ratio in 2022 is projected to be 1.8% below its 2019 level, versus a gap of only 1.6% for men, despite women having an employment rate 16% below that of men. According to a recent report by CMIE, of the 35 million unemployed who were actively looking for work in December 2021, 23% or eight million were women.

HOW CAN THE URBAN EMPLOYMENT ACT WORK?

Once the Union government decides an outlay for the plan, the working of the Urban Employment Act would not be a problem owing to our experience of successes and failures with MGNREGA.

Some state governments like Kerala, Himachal Pradesh, and Odisha are already working with urban employment guarantee schemes. The Union government can develop these.

Right at the inception, it must be clear that the urban employment guarantee act cannot be a permanent solution for the impending crisis of unemployment, a sprout of which we saw in the recent railways’ recruitment following a Bihar bandh by the youth organizations. The governments may be merrily happy to engage youth in office jobs through the act instead of providing them with regular employment. A vacancy of nearly 15 lakh in central government and 30 lakh in state government exists, which should be direly filled.

All that the employment guarantee act can do is to provide some buffer relief to the unemployed and simultaneously create assets in the urban areas.

What kind of work must be undertaken under the urban employment guarantee must be decided by the local governments through people’s participation. However, there can be certain categories that can be prioritized.

Green jobs can be a completely new category introduced under this act. These jobs could include appreciating the urban commons and clearing the ponds and water bodies in urban centers. There are dozens of water ponds, water bodies, and natural springs in the towns which have become dirty or contaminated because of neglect and frivolous urban planning. Instead of giving work to large consultancy firms, the city governments can do this work under the employment act.

Likewise, the appointment of bicycle officers in towns and creating bicycle infrastructure can be another essential work under green jobs that will be highly beneficial for the people and the city.

Maintenance of parks and other green spaces can be many areas that can be part of green jobs.

With little skill imparting, the city can employ ‘low carbon officers’ for creating an environment with a low carbon footprint. This is not limited to solid waste management but can go beyond that. Environment for mobility, environment for reducing energy consumption, etc., can be many areas for such green jobs in the city.

A research paper contributed by Azim Premji University has listed different types of works that can be incorporated into the employment guarantee act.

Public works are often looked upon as the most neglected ones in urban areas. The city governments have been taught the mantra of outsourcing and handing their public works to contractors. Even for works like road repairing, etc., they have to fall on tenders as there is hardly any workforce left with them. This takes lots of time, and the damage becomes greater by that time.

Under the employment guarantee act, the unskilled workforce can take up the patchwork for repairing roads, which will be prompt and quick.

A view needs to be taken towards women’s participation in the workforce, primarily as many women work in the unorganized sector. Providing reservations for women for a certain percentage of jobs under the proposed urban employment guarantee law can prove to be a major step in this direction.

According to an estimate, such a program will cost between 1.7–2.7% of GDP per year to provide work opportunities to more than 50 million workers in the urban areas. Just a small percentage of tax, nearly 1% on the wealth of the 98 wealthiest people in the country, can easily fund such a scheme

As pointed out, the provisions of the 74th Constitutional Amendment must not be overlooked, and hence the provisions of such an act must be drawn by the local governments through their ward committees and ward sabhas.

The article was first published on NewsClick A Louder Cry for Urban Employment Guarantee in the Next Union Budget on 1 February 2022.