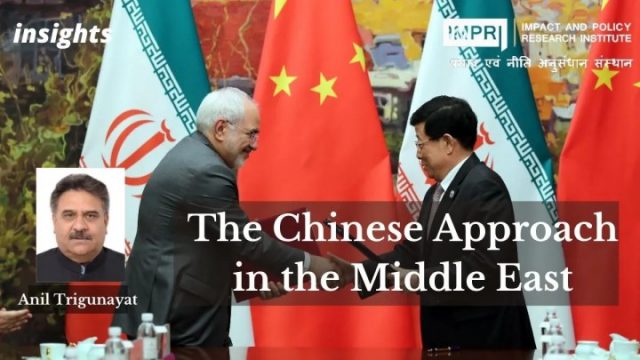 China has emerged as a force to reckon with in the Middle East after quietly pursuing its strategic, economic, and security objectives for decades while expanding the tentacles of its all-encompassing Belt and Road Initiative. Beijing’s focused approach has its footprints from Iran to Israel and across the region overcoming the intra-regional rivalries.

A quiet approach without upsetting or challenging the US pretense of the security umbrella, Beijing went ahead enriching and expanding its ties even during the pandemic. Its digital silk road and health silk road initiatives in addition to standard trade and investment cooperation in key dual-use infrastructure projects have provided it with the requisite heft and leverage without undermining the local power matrix.

Unlike the western countries, China does not get into the local governance models and is smoothly able to work with all regimes without passing any value judgments. For it to change or alter the governance architecture in mostly ruler-oriented regimes has not been the top of its agenda.

Besides, like itself, the regional autocratic architecture can work in sync with Beijing’s objectives as it also offers to play cupid from the resolution of the Palestinian issue, to nudge Iranians to normalize relations with Saudi Arabia and UAE, and to return to the nuclear deal (JCPOA).

With the US being in a retraction mode, the field is almost clear for it to provide an alternate pole. Since Beijing is the largest consumer of oil and gas from the region, apart from expanding its other economic engagements, regional stability remains a quest and concern for it.

At the same time its quest for strategic ports like Djibouti and Duqm, and in the UAE and Israel, is predicated on securing its economic interests and strategic objectives should the situation so warrant. Its strategic partnerships with Iran, Saudi Arabia, Egypt, Oman, and UAE are in sync with the budding rapprochement among the regional rivals. For the Gulf and West Asia in general ‘Look, East’ is becoming a preferred option.

High-level exchanges, visits, and agreements are an indicator of the depth of a relationship at the bilateral level. China formulated its Arab Policy (2016) through a white paper and its 1+2+3 strategy encompasses cooperation in energy, infrastructure; trade, investment; and technology and innovation including in civil nuclear, space and renewables as these countries embark on their Vision 2030.  Increasing trade and strategic ties are integrating their economies even more.

The biggest boost the Chinese Covid vaccines got was in the UAE, Egypt and Morocco. As it signed a 25 years strategic cooperation agreement envisaging some $400 bn in investments with Iran, its trade and strategic engagement with UAE and Saudi Arabia increased even more.

Trade between China and Saudi Arabia grew more than 20 times from $3.1 billion in 2000 to $67.1 billion in 2020, with $28 billion in exports and $39 billion in imports. Some reports indicate that Beijing was helping Riyadh with missile technology and defense manufacturing as well as in civil nuclear area, and likewise in some strategic projects in UAE and Israel,

which made the Americans a bit more attentive and they pulled the ever so weakening strings, to pull back the enthusiasts. But the Chinese bandwagon moves apace as the regional powers look for reliable and willing alternatives. Not an easy dance for China too, as tiptoeing is no longer an option.

President Xi Jinping’s visits to Riyadh, Cairo, and Tehran in 2016 and later in 2018 to UAE keyed in the collaborative matrix. It developed strategic partnerships with several countries in the region and did not believe in ‘either-or syndrome’.

Not surprisingly, 2022, in the first two months alone has been exemplary, as the presence of several leaders from the region including Emir of Qatar Sheikh Tamim Al Thani (after his visit to Washington DC and becoming a major non-NATO ally) and the UAE’s ruler Sheikh Mohamed bin Zayed Al Nahyan, as well as the Egyptian President Sisi,

amounted to endorsing the Winter Olympic games despite the western boycott, overtly on account of its dismal human rights records, especially against Muslim Uyghurs.

Prior to that, Foreign Ministers of six regional countries and Iran and Turkey separately visited Beijing to confer with Foreign Minister Wang Yi. As such China Arab Forum and Strategic Dialogue Initiative with GCC countries have become the major interactive platforms with the regional elites.

When Trump walked out of the Iranian nuclear deal, Beijing stood by Tehran and continued to import oil and gas despite US sanctions. This gave some confidence to the regional powers to engage even more with China, even as they do not wish to get embroiled in China-US or China -India conflicts.

Simply put they do not wish to choose from either but retain their access to both. It suits China in the interim as it employs its charm across the region until the choices are forced upon it, which will decide the eventual outcome of its ‘Project Middle East.

India has also moved its transactional relationship to a strategic partnership with several countries in its most important ‘extended neighborhood- West Asia’. Institutional mechanisms are being created with high-octane high-level exchanges.

This week only at the virtual Summit between PM Modi and Sheikh Zayed of UAE, a Comprehensive Economic Partnership Agreement (CEPA) will be signed, as it is negotiating Free Trade Agreement with Israel, and USA partners in the new West Asian QUAD.

For Indian policymakers the unbridled Chinese expanse, especially in South Asia and Middle East and the Indo-Pacific, may develop into a near ‘zero sum’ equation as the bilateral and regional contestation with Beijing is played out with increasing salience.

How the regional actors will accommodate their expectations from both New Delhi and Beijing, and other superpowers like US and Russia, will require a more suave diplomatic maneuvering and finesse on their part!