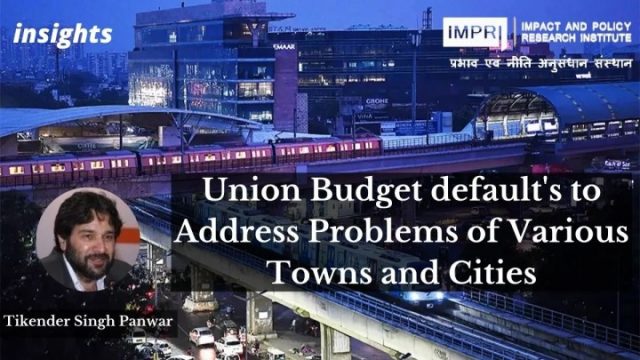 The Union Budget 2022-23 has not provided relief to people most severely affected by the pandemic. The Budget was expected to address record unemployment, which spiked during the pandemic in the cities, with some kind of urban employment guarantee scheme.

The only positive aspect of the Budget was Union finance minister Nirmala Sitharaman’s admission that the current model of urban development is not sustainable. A team of experts will be constituted to adopt a new approach, she said, while allocating a certain amount for teaching urban development with a new understanding at five centers of excellence.

However, going by the government’s past record and its understanding of urbanization as mentioned in some of the documents of the NITI Aayog and the ministry of housing and urban affairs, it is prudent to be cautious about the Centre’s call for a new approach to urban development.

Urban planning is already being taught at several colleges and universities. But the government’s new plan apparently hinges on the 2018 National Urban Policy Framework (NUPF) and the NITI Aayog.

The NUPF, which was supposed to have an integrated and coherent approach towards the future of urban planning, is a disaster. The policy mentions ancient cities and 10 sutras—the philosophical principles of city governance—giving it a completely communal outlook. Likewise, the NITI Aayog has been advocating massive changes in land use planning, a sample of which is the ongoing redevelopment of the Andaman and Nicobar Islands and Lakshadweep.

The Budget was expected to address the problems plaguing the 5,000-plus towns and cities. Unemployment is soaring, informal sector workers are finding it difficult to survive, the cost of electricity and other essential services is increasing and the health sector is focussing more on curative care. Besides, the number of homeless has increased to more than 10 million, slum-dwellers are being evicted, pollution has become a major health hazard and urban development is mainly planned by large international corporations.

Sitharaman rightly pointed out that 50% of India will be urbanized by 2047—but with the current pace of development and design, more Indians would be living in urban slums rather than in decent houses.

The Budget should have allocated a decent amount to formal housing, which has fallen from nearly 6% to 3% in the last decade. The Pradhan Mantri Awas Yojana (PMAY) was allocated Rs 48,000 crore, which is less compared to the last Budget considering the rate of inflation.

The sluggish pace at which houses are being constructed is more worrying. Of the total sanctioned 1.14 crore urban housing units, only 53.42 lakh houses, roughly 47.6%, have been completed so far.

The Affordable Rental Housing Complexes, a sub-scheme under the PMAY-Urban, is important for the informal sector. However, out of the 86,065 houses constructed under various schemes like the Jawaharlal Nehru National Urban Renewal Mission and Basic Services for Urban Poor, etc., merely 1,934 have been allotted with Chandigarh allotting 88% of them. In this situation, the government’s target of constructing 80 lakh more houses seems useless.

The finance minister didn’t mention a word on slums, where nearly 40% of Indians. Simply providing land tenure rights and proper facilities would have improved the lives of slum-dwellers.

Urban mobility is directly linked to working people’s ability to commute, their savings and health, climate change action plans in cities, and rising pollution. The Centre was expected to spend on rapid bus transport, pedestrianization, and cycling tracks. However, wedded to the large capital-intensive technological paradigm of urban mobility, the Budget again emphasized Metro travel, which is not one of the core desired forms of mobility—especially for the working class.

The addition of 20,000 buses, which means four buses for the 5,000 townships, is ridiculous. Besides, even these buses will run on the PPP model with the government’s intent to facilitate the entry of private players into public transport.

Since Narendra Modi came to power in 2014, the government has been focused on constructing super-specialty hospitals as part of its urban development instead of building better primary and community health centres. The PHCs and CHCs lack some of the basic infrastructures, like X-ray machines and laboratories, etc. Under the Centrally sponsored schemes, the Budget reduced the allocation to 11,024 urban health centers from Rs 50,591.14 crore to Rs 47,634.07 crore.

The launch of Swachh Bharat Mission (SBM) Urban 2.0 was expected to remove the flaws in the first mission and emphasize more on handling solid and liquid waste. Instead of building a decentralized waste management system, the Centre wants a more capital-intensive technology-driven system and a good amount of subsidy has been provided to such units mostly run by private individuals.

The allocation for SBM was the same as the last year at Rs 2,300 crore despite heaps of untreated waste piling up, especially in urban agglomerates. In March 2021, the Supreme Court observed that the mountains of garbage at Delhi’s Ghazipur landfill site would reach as high as the 73-meter Qutub Minar.

WHERE ARE THE SMART CITIES?

The government has apparently forgotten about one of its flagship programs—smart cities. Sitharaman didn’t mention a word on smart cities. It is better for the government to dump the idea as cities have become centers of exclusive planning and urban development. Even the Atal Mission for Rejuvenation and Urban Transformation was allocated only Rs 200 crore more from Rs 13,900 crore to Rs 14,100 crore. With the high inflation rate, this is actually a fall in fiscal terms.

Providing water to every household is another much-hyped objective of the government. The Jal Jeevan Mission aims to provide water to 2.7 crore households in urban areas in five years. The scheme (urban) was showcased in February 2021 with a total outlay of Rs 2,87,000 crore. The target is to reduce non-revenue water (NRW) to 20% on the lines of the Telangana model of PPP.

There is no problem in reducing NRW. In fact, it should be done by plugging leakage and overhauling the infrastructure. The other way is by levying a user fee on residents which shall be equivalent to the cost of production of water. However, the PPP model will only serve the interests of large corporates. Even the budgetary allocation of Rs 60,000 crore for the mission (both urban and rural) was under revenue expenditure, not a capital expenditure.

CLIMATE CHANGE AND ITS IMPACT

The Budget speech didn’t mention climate change at all despite increasing incidents of floods heatwaves in urban areas. Forget about mitigation strategies, even the desired goal of mapping vulnerability in cities is not the government’s priority. Most of the towns do not even have a climate atlas or even a vulnerability study to assess the challenges urban areas face.

The government’s priorities can be clearly seen through the prism of the Budget, which calls for continuing with the previous models of urbanization instead of providing relief to people and allowing cities to become centers of massive accumulation of capital through the appropriation of basic services.

This article was first published in the NewsClick as Union Budget Fails to Address Problems of 5,000 Towns, Cities on 16th February 2022

Tikender Singh Panwar is the former deputy mayor of Shimla and is currently a senior visiting fellow at the Impact and Policy Research Institute (IMPRI) and an advisor to the Samruddha Bharat Foundation.