Home Insights The Arrival of Chinese Vessel in Sri Lanka and its Impact on...
Facebook
Twitter
WhatsApp
Linkedin
Email
Print 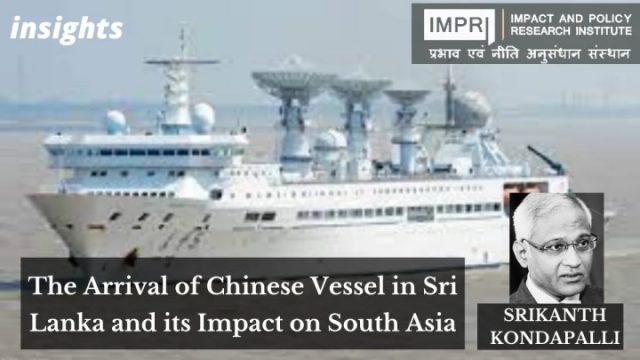 Despite serious reservations expressed by both Sri Lanka and India, and after a clearance delay of five days, China’s People’s Liberation Army (PLA) Strategic Support Force vessel Yuan Wang 5 finally docked at the Chinese-leased Hambantota port on 16 August 2022. Of course, the Sri Lankan government later clarified that the docking was for supplies and maintenance and that the vessel wouldn’t undertake any “research” activities in its waters. While this point was reiterated by the ship’s captain, Zhang Hongwang, observers are taking it with a pinch of salt.

The resulting shadow-boxing between India and China, in the backdrop of an already strained relationship following the land skirmish in mid-2020 in Galwan, has consequences for the neighborhood as well. The Yuan Wang 5 incident will strengthen China’s drive to acquire hegemony in South Asia and the Indian Ocean, in four areas.

In its quest to impose hegemony in different parts of Asia, China has been displacing dominant powers in several regions. In South Asia, following the ancient stratagem of hexiao kongda (‘cooperate with the small to counter the big’), China has made disruptive inroads into Nepal, Bhutan, Bangladesh, Afghanistan, Sri Lanka, Myanmar, and the Maldives, while retaining influence over Pakistan. The aim here is not only to dislodge India but to also create disequilibrium domestically in South Asian countries. This will lead to China effectively implementing its divide and rule policy and acquiring structural power in the region.

Yuan Wang 5’s berthing at Hambantota revives historical images of China’s maritime invasions. During the third expedition to the Indian Ocean, Admiral Zheng He’s sailors kidnapped a recalcitrant Vira Alakeshvara of Kotte kingdom (not far from the Chinese-leased Hambantota) in 1410-1411 and presented him to Ming emperor Yongle. China undertook regime change by installing Parakramabahu at Kotte. Now with the Rajapaksas on the run and Ranil Wickremesinghe under siege, Beijing finds an opportune moment to make inroads into Sri Lanka and attempt another regime change in its favor.

China’s historical narrative is that the Europeans forced open the decaying Qing China through ‘gunboat diplomacy’—mainly naval vessels and coercive diplomacy. More than a century later, with China having ascended to being the second largest economy in the world, Beijing is attempting similar antics across the globe.

Much as the European powers had imposed treaty ports in coastal China—some like Hong Kong on a 99-year lease—Beijing grabbed Hambantota also on a 99-year lease. It is no surprise then that the head of the ChinaMerchant PortHoldings that owns Hambantota received the Yuan Wang 5, instead of the vessel docking at the much larger Colombo Port.

China’s economic might allows it to arm-twist the Sri Lankan government, which is already under financial siege and debilitating social unrest. Sri Lanka owes over US$ 51 billion in debt to several lenders, with China’s share amounting between 10 to 20 percent. Beijing refused to defer loan repayment and threatened Sri Lanka to comply with its diktats.

Chinese Foreign minister Wang Yi visited Colombo in January 2022 with no offer of major relief to Sri Lanka, but with his sights set on a forum of Indian Ocean states. Beijing’s stranglehold on Colombo provides it a good start to compete with India in the region. Sri Lanka’s loan payment default on the Chinese-constructed Hambantota Port came in handy to arm-twist Colombo into accommodating the PLA vessel this week.

Competition in the Indian Ocean Region (IOR)—and in space—is also further triggered by the Yuan Wang 5 visit. Like China’s post-2008 naval missions to the IOR on the pretext of checking piracy, Yuan Wang 5’s deployment in the region is probably permanent. It is shortly expected to be deployed again to monitor the Mengtian space module. In the past decade, China has launched over 30 satellites for different countries and made ground preparations for permanent missions.

In May 2007, Beijing launched a communication satellite at a cost of US$ 311 million—NIGCOMSAT-1—for Nigeria, with ground station support from the capital, Abuja, and Xinjiang’s Kashgar. In 2001, China set up tracking, telemetry, and command station at Swakopmund in Namibia. It launched a communications satellite for Sri Lanka in November 2012, in which former President Rajapaksa’s son played a crucial role. Yuan Wang was earlier involved in 80 missions related to Zhongxing 2D satellites, Moon and Mars missions, space stations, and for long periods of sailing—more than half a million nautical miles.

Since 2005, China has been crafting the Asia-Pacific Space Cooperation Organisation to counter US influence in space. Yuan Wang 5 is expected to support forthcoming ‘fourth-dimensional warfare’ in space, with implications for the Quad members. While China highlights Yuan Wang 5’s civilian achievements, no data on its military role, specifically on missile tracking missions, has been made available.

Yuan Wang’s predecessor, Xiangyang Hong, and another vessel, Dongfang Hong, conducted ‘scientific investigations’ in the Sea of Japan in the early 2000s and paved the way for intelligence-gathering missions near Sakishima Islands. In a similar pattern, China has reportedly sent several surveillance ships to the Indian Ocean in the past two years. This suggests that the PLA Navy will provide permanent company to the Indian Navy in the region. Yuan Wang’s arrival into Indian Ocean waters is thus cataclysmic.

For India, Yuan Wang 5’s presence clearly has major security consequences. For one, India must strengthen its space cooperation agreement with Vietnam. Further, with an extra-regional power like China making forays into the Indian Ocean, India—hesitation aside—needs to go concertedly into the South China Sea and protect its energy and other interests in the region.

This article was first published at Institute of Peace and Conflict Studies as Gunboat Diplomacy with Chinese Characteristics: Why the Yuan Wang 5’s Arrival in Sri Lanka is Consequential for South Asia on August 22, 2022.