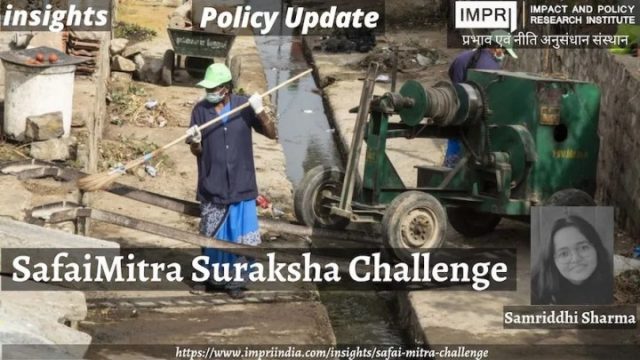 In India, an estimated 5 million full-time sanitation workers, with 2 million working in high-risk conditions. Now, this high-risk or hazardous cleaning is often associated with the work performed by sewers and septic tank cleaners (SafaiMitra). For instance work including emptying toilets, pits, and septic tanks; entering manholes and sewers to fix or unblock them; transporting fecal waste; working treatment plants; as well as cleaning public toilets or defecation around homes and businesses, its definition has multiple “hazards”, health, occupational, as well as environmental.

According to a report, in the last five years, as many as 347 people died while cleaning sewage tanks. Though the numbers have gone down and the government has been taking active steps towards mechanization and safety, adding another layer of rehabilitation.

Sri Hardeep Singh Puri, emphasized the initiative being aligned with the Swachh Bharat Mission-Urban(U), a broader and more holistic initiative under the Government of India. Eradicating hazardous cleaning is at the core of the challenge. Promoting mechanized cleaning of sewers and septic tanks is a close second. Capacity building and empowerment of Safaimitras have featured as a top priority thus, this initiative holds immense value. The very symbolic launch on World Toilet Day should add impetus for greater and earnest participation by state actors, and citizens alike.

Prerequisites for participation involve notifying the Responsible Sanitation Authority (RSA) and setting up the Sanitation Response Unit (SRU), plus possession of the ODF+ certification before applying. The use of personal protection equipment (PPE) items and gear has been made mandatory too.  The key parameters to assess the performance includes empowerment of citizens, mechanisation of the work, capacity building, standardisation of septic tanks, and adoption of innovative approaches.

Key highlights of the initiative are as follows:

A felicitation ceremony was hosted as a part of Swachh Bharat Mission-Urban 2.0 on 20 November 2021 by the Ministry of Housing & Urban Affairs (MoHUA), with the attendance of eminent guests.

President Kovind during the felicitation ceremony of the Swachh Bharat Mahotsav said that effective management of solid waste is essential to keep the cities clean. He also acknowledged the services rendered by Safaimitras and sanitation workers during the pandemic. The first batch of Safaimitra Suraksha Challenge winners was declared with Indore, Navi Mumbai, Nellore, and Dewas emerging as the top performers. In the state and UT categories, Chhattisgarh and Chandigarh came up as the winners. With cities actively participating we can surely hope for our

As reiterated by the honorable Sri Hardeep Singh Puri falls not just under the commitment of the state and government authorities but calls for the active participation of our citizens. Holding responsibility and working towards a society free from the generational cycle of problems and fatal accidents faced by workers should be our priority. Introduction of the Prohibition of Employment as Manual Scavengers and their Rehabilitation (Amendment) Bill, 2020, which comes under the government’s National Action Plan, plus other initiatives like NAMASTE and Safaimitra Surakshit Shehar are all concrete steps towards elimination of hazardous cleaning and setting up a mechanized system.