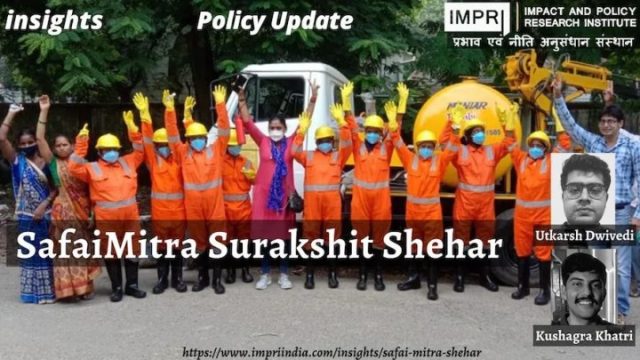 In August this year, 500 cities across India declared themselves as ‘Safai Mitra Surakshit Shehar’. This implies transformation of every ‘manhole’ into a ‘machine hole’ and showcases the success of the decisive drive towards discarding the inhuman practise of manual scavenging.

The first phase of the Swachh Bharat Mission-Urban (SBM-U), launched in 2014, has emerged as one of the world’s most extensive urban sanitation programmes, playing a pivotal role in bringing about a paradigm shift in urban sanitation across the country. With its heavy focus on solid waste management, the flagship Swachh Bharat Mission (SBM) 2.0 is a potential game-changer for India. The key mission agenda is making India “garbage-free”, with components like remediation of legacy waste and building infrastructure for treatment, processing, recovery, and recycling of municipal solid waste to divert 80 percent of it from reaching the landfill by 2026.

Swachh Bharat Mission-Urban 2.0 (SBM-U 2.0) was launched on 1st October 2021, with the overall objective of creating ‘Garbage-Free Cities’. This implies that all municipal solid waste (including construction and demolition waste and plastic waste), and liquid waste (including grey and blackwater) in cities is safely collected, processed, and scientifically treated so that no untreated wastewater is discharged into water bodies and no untreated municipal solid waste is sent to landfills. The Mission’s second phase also emphasises imbibing the spirit of a circular economy with a focus on waste-to-wealth initiatives.

Against this backdrop, the ‘National Capacity Building Framework for Garbage-Free Cities has been conceptualised under SBM-U 2.0. The national framework proposes a comprehensive approach for capacity building in India’s urban sanitation and solid waste management sectors. SBM-U 2.0 also emphasises the creation of a robust ecosystem which identifies and collates the best-in-class knowledge in each sector and facilitates strategic dissemination to all stakeholders, supporting initiatives for building their skills and capacities.

The national framework envisions institutionalising a streamlined and targeted approach towards capacity building and skill development interventions under SBM–U 2.0. While the capacity-building approach under the first phase majorly focused on training across thematic areas of the Mission, SBM-U 2.0 adopts a holistic vision for strategically enhancing the capacities of all stakeholders to achieve sustained outcomes and realise the vision of a Garbage-Free urban India. Interventions under capacity strengthening will focus on enhancing the capacities and skills of the existing cadres of officials at the state department and Urban Local Bodies (ULB) levels.

In this journey of swachhata, States, Union Territories (UTs), and Urban Local Bodies (ULBs) have been the critical engines in effectively implementing interventions and ensuring the achievement of Mission objectives. Executive officials have played a pivotal role in strategic decision-making, guiding the overall approach to enhancing sanitation and waste management in cities. Technical officials have formed the backbone of implementing technical interventions and solutions. On the ground, municipal sanitation workers have played an essential role in enhancing and sustaining the standards of sanitation and waste management.

Recently, Urban India has recommitted itself towards ensuring all sanitation workers’ safety, dignity, and security (SafaiMitras). For the first time, 500 cities across India have declared themselves as ‘SafaiMitra Surakshit Shehar’. In doing so, they have established that the cities can achieve adequacy in terms of institutional capacity, manpower and equipment norms as stipulated by MoHUA and are providing safe working conditions for SafaiMitras. The ‘SafaiMitra Surakshit Shehar’ declaration by 500 cities aligns with Swachh Bharat Mission-Urban’s long standing goal of promoting sustainable sanitation practices and acting as a catalyst for turning every ‘manhole’ into a ‘machine hole’.

The Government is committed to ensuring ‘Zero Fatalities in Sanitation Work’. On World Toilet Day in 2019, MoHUA launched the ‘SafaiMitra Suraksha Challenge’ through which 100 Lighthouse cities were identified that were well equipped in terms of sanitation infrastructure and facilities. MoHUA also provided a protocol for ‘SafaiMitra Surakshit Shehar’. States have set up Responsible Sanitation Authorities (RSAs) & Emergency Response Sanitation Units (ESRUs) at the district level and are now prioritising training and capacity building of SafaiMitras. It has taken 75 years for us to come to this juncture, but any task started well is bound to achieve its goal. MoHUA is committed to ensuring that all Indian cities declare themselves as ‘SafaiMitra Surkashit’ by March 2024.”

Of the 100 Lighthouse Cities, 94 have declared themselves as SafaiMitra Surakshit. Apart from these, 406 other cities have also declared themselves, with more continuing to do so. A validation will follow the self-declaration of these cities by the local political leadership of the city, after which MoHUA will engage with an independent third party for validation.

Wherein, cities and urban local bodies of the country share their best practices and practical solutions. Some notable steps taken were: Dewas incorporated weekly health inspection of the workers, Jamshedpur carried out a survey of the oxygen levels in different depths of sewer holes, studying the effectiveness of manual cleaning, as well as estimated the need and frequency for different sewers to be cleaned, Tirupati geotagged machines and created teams of safai Mitra for mechanised cleaning. The state of Odisha under their Garima Scheme recognised sanitation workers as highly skilled, revised their minimum wage and awarded a 15 percent risk and hardship allowance.

The SafaiMitra Suraksha Challenge was launched in 2020, and planned to have 75 lighthouse cities declared as Surakshit Shehar by August 2022. Due to the adequate availability of equipment on the GeM portal and the authorities’ diligence, the actual result exceeded the goal, 500 cities self-declared themselves as Surakshit Shehar and of which 94 are lighthouse cities.

The final goal is saturation of the initiative in 100 percent of the Urban Local Bodies in the country by 2024. A goal that is imperative for a rapidly urbanising India and is well on track for completion.