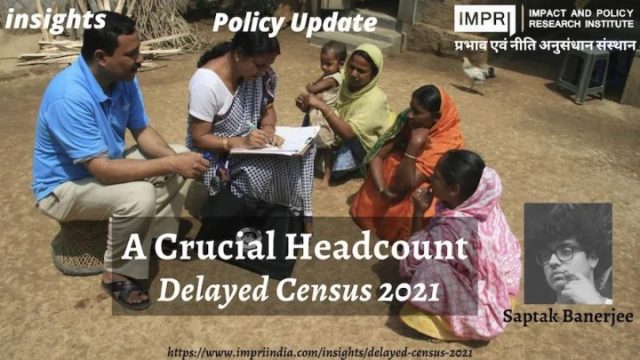 The Indian Census has been delayed. While some sources claim that it is now to be conducted in 2023, it appears on the whole that the planning and preparation that is a prerequisite for the initiative has been put off indefinitely. While the Government of India posted in its notices that the reason for the delay was the Covid-19 pandemic, this article explores why such a reason might be a purely ostensible one. The article argues for immediate course correction, for reasons more than just having a “headcount”.

In a public notice posted by the Ministry of Home Affairs (MHA) on the 24th of December, 2019, the Union Cabinet had approved the conduction of the Census of India, to be held in 2021, as also the updation of the National Population Register, alongside their respective allocated budgets.

However, in two successive updates by the government on the stated matter dated March and July 2021, the decision to postpone the Census project and the NPR updation was made known, citing the Covid-19 outbreak as the reasons. These notices were issued in the first half of 2021; now, at the time this article is being written, we find ourselves in the tail-end of 2022 with no official update on the issue whatsoever.

This aberration is rather striking, given that the rhythmic regularity with which Censuses are conducted serves a particular purpose – they offer important insights through comparative analysis of the datasets retrieved from chalked-out periods of a decade each.

Understandably, Covid-19 marked the interruption of a host of statistical and numerical issues, but the relative lack of priority acceded to the most crucial survey of a democratic nation should be a cause for concern. Indeed, one might argue that Covid-19 itself should be reason enough for the Census to be conducted, given the dearth of statistical data on the real effects of the pandemic. Moreover, the United States, UK, China, and (notably, given its status as a “Least Developed Country”) Bangladesh have successfully conducted.

The issue of the Census is further brought into a conflicted arena when we consider the fact of the government’s attempts at coupling it with the National Population Register (NPR), an act purported by many in the opposition as a sly attempt at getting started on the controversial National Register of Citizens, on the basis of a much polemicised Citizenship Amendment Act. These extensions of the NPR notwithstanding, a senior government official reports to The Hindu that the two activities can be conducted separately.

Besides, the government also seeks to introduce a digitized collection of births, deaths and those turning 18 years of age; it seeks to use this app – called eSwaroop – to conduct parts of the Census digitally.

Why then does this crucial survey find itself on the back burner?

India has had regular Censuses since 1881, and surprisingly, despite the ravages of World War II in 1941 and the Sino-Indian War in 1961 this regularity was not interrupted.

As per official records, the Census of India is carried out in two stages: first, the Houselisting and Housing Census, wherein officials note the number of houses, their location and conditions so as to provide “comprehensive data on the condition of human settlements, housing deficit and consequently the housing requirements to be taken care of in the formulation of housing policy”.

With a gap of approximately six months, the second phase of Population Enumeration, wherein the number (and condition, employment, et cetera) of individuals residing within the Houses previously enumerated is ascertained. Thereafter, the data is analysed and validated, following which it is disseminated through a published manuscript. This manuscript, however, does not display certain sensitive information determinedly kept confidential.

Stress is laid to define a “Census Moment”, wherein a particular date is set as the date from which the conduction of the Population Enumeration exercise begins: those born after this moment, or have died before the moment, are excluded from consideration. For India, the “Census Moment” is traditionally the 1st of March of the Census year.

The Census is carried out by a Central Census Division of the Ministry of Home Affairs, headed by the Registrar General and Census Commissioner of India (incumbent: Shri Vivek Joshi), which works in tandem with the respective State Divisions. The Census, simply put, is an anthropological survey, that makes use of a questionnaire prepared by the Central Census Division, to be conducted in accordance with a schedule. PR Goswami, in his elucidation of the Census method, writes that “[t]he success of a census depends on the correct design and administration of the schedule.”

One can surmise that the framing of the questionnaire, the exact composition and wording of the questions, can lead to a variety of answers – and thereby, within this part of the process rests a significant amount of importance.

The novelty that the Government of India seeks to introduce in its 16th Census endeavour is a “Digital Census”, wherein a mobile app purported to be “user friendly” shall be used by the enumerators for the collection of said data. This is unsurprising – the US, UK and China have all adopted a digital mode of data collection.

The Census, unquestionably, is of supreme importance. At a cursory glance, the Census provides a dataset for the population at a particular point in time which can be further utilised in the administrative capacity of policymaking. The US Census Bureau, for instance, highlights that their decennial Censuses are conducted for the purpose of apportionment (of Parliament seats), redistricting (of electoral constituencies), funds allocation, and for aid to businesses in their strategizing.

Two important facets of this, as the official Indian Census website highlights are the principles of “universality” – which expresses the coverage of the entirety of the population within a defined territorial space (in this case, the Indian nation); and “simultaneity” – which expresses the coverage of a population within a predefined period of time.

Through these, two versions of the population are defined. On the one hand, there is the “static” aspect, which refers to the population, as it stands, enumerated within the predefined period exactly. On the other hand, is the “dynamic” aspect, where the enumeration is compared with the enumerations constructed in the decades previously, offering a motile image of the demographic.

The Census, however, has much utility beyond the administrative planning and implementation framework: research, both within STEM fields and the Social Sciences often make use of the Census results for estimations in their study, as well as to delineate portions of the population in their research. The National Income estimates, as collated within the Census questionnaires, are an indispensable resource for economists and social scientists.

The Covid-19 pandemic disrupted the undertaking of the Census for India, whose result was its postponement by two years. This is not in keeping with trends worldwide – as mentioned, the US, UK, China and even Bangladesh moved to conduct their decennial census, albeit with lesser ferocity. This calls to mind a host of issues.

Keeping in mind the “dynamic aspect” of the Census mentioned previously, the extension of the decennial Census by two years marks an expanded period of data considerations, which will undoubtedly have detrimental effects on our understanding of demographic changes in the country. At the same time, by way of the arduousness of the process itself, the crucial data which acts as an outcome will conceivably cause delays in the making and dissemination of welfare schemes for the population under threat – especially in the time of growing inflation as we live in.

Moreover, the additional exercise of the National Population Register, which the incumbent government views as a necessity in bringing about the National Register of Citizens, has added further tonnage to the Census exercise. While the government has declared that the Census data will remain confidential (see here), the claim of conduction of the NPR and the Houselisting exercise parallelly implies that a fair amount of time is being allocated for the same, and that adds significantly to this delay.

The NPR itself, moreover, is riddled with issues that it must seek to answer before its ratification. It can, undoubtedly, shed light on the problem of illegal immigrants, an issue of particular importance for the cadre and the electorate of the incumbent government, but it cannot outweigh the priority of the Census.

What adds additional weight to the preparation process, however, is also the government’s decision to merge the Socio-Economic Caste Census into the Social Registry – of which, the latter depends on the decennial Census. Undoubtedly, the Census ministry has its task cut out for them.

Having highlighted its utility previously, it is advisable that the government spare no time in conducting the demographic exercise. The ever-growing population in a rapidly developing nation requires a minute examination to rid itself of the issues which plague the people. Without the inward glance that the Census provides, India’s move forward towards its projected stature as an economic and democratic powerhouse will be incomplete.

Moreover, an interesting fact that is to arise from the Census is to see where our population enumeration stands with respect to our populous neighbour – China (whom we are expected to overtake by population size by the next year). The government should do well to take note of the nations highlighted in this article: precious time is lost, but it can still cut its losses.