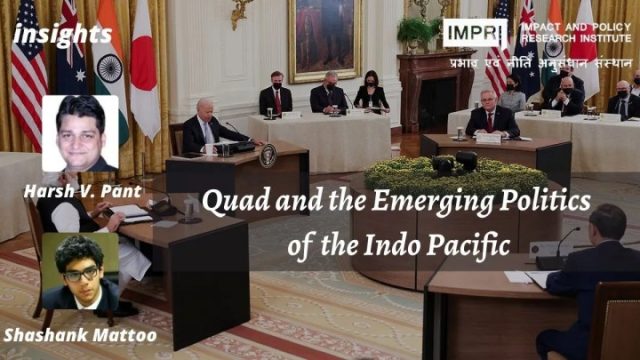 In their first physical meeting in over two years, foreign ministers of India, the US, Japan, and Australia reiterated their commitment to the Quadrilateral Security Dialogue’s rules-based international system and freedom of navigation at Melbourne last week. While professing support for a ‘free and open Indo-Pacific’ may seem little more than diplomatic buzzwords, regular Quad meetings don’t seek to remake the wheel.

At a time when the Moscow-Beijing entente has been intimidating neighbors and rewriting the rulebook regarding accepted Great Power behavior, the Quad’s repeated support for established principles of international law and transparency restores some stability to the international system. It also has good reason to cheer. The Quad Vaccine Partnership, which had pledged to donate 1.3 billion Covid vaccine doses by end-2022, appears to have made significant headway. While Quad partners had only supplied 79 million doses of its ambitious target by September 2021, that number now stands at more than 500 million. With Quad-supported India-manufactured vaccines slated for delivery in the first half of 2022, the grouping is set to meet the first of its major promises.

The operationalization of the agenda tabled at the Quad Leaders’ Summit in September 2021 is now the focal point of attention of the four countries.

Also notable was the Quad’s continued focus on diversifying its areas of cooperation. Determined to avoid a reputation for being a China-focused military alliance dressed up in diplomatic niceties, it has outlined its plans to diversify into maritime security, humanitarian operations, economic security, cybersecurity, and technology standards. For example, Australia will host the Indo-Pacific Clean Energy Supply Chain Forum this year. The operationalization of the agenda tabled at the Quad Leaders’ Summit in September 2021 is now the focal point of attention of the four countries.

Japan and Australia have been at the receiving end of China’s economic coercion. In response, the US has proposed the creation of national Economic Response Defence (ERD) teams that will mobilize in support of nations facing Beijing’s economic ire. The Quad can look into expanding this US proposal into a jointly funded and run initiative that presents a united and credible alternative to China.

New Delhi can also take heart from the summit joint statement’s endorsement of its views on Myanmar and counterterrorism. While Washington has slammed Myanmar’s military junta with sanctions in the aftermath of its 2021 coup, India and Japan have taken a more circumspect approach. New Delhi’s cooperation with Myanmar on counterinsurgency in India’s northeast and connectivity projects, as well as China’s growing footprint, has stayed in India’s hand. In calling for an end to the military’s crackdowns and a negotiated settlement brokered by Asean, the joint statement reflected India’s more nuanced approach to the Myanmar crisis.

New Delhi’s cooperation with Myanmar on counterinsurgency in India’s northeast and connectivity projects, as well as China’s growing footprint, has stayed in India’s hand.

The statement also incorporated India’s push for the inclusion of a counterterrorism focus in the Quad’s activities, specifically condemning the 26/11 and Pathankot attacks on Indian soil.

A few items, however, remain on its ‘to-do’ list. First, discussions on a comprehensive trade architecture for the region have been conspicuous by their absence. Even as China knocks on the door of US-designed free trade pacts like the Comprehensive and Progressive Agreement for Trans-Pacific Partnership (CPTPP), the Quad has been held back by Washington and New Delhi’s domestic compulsions on trade. All four partners are painfully aware of the reality that, in the Indo-Pacific, economic policy is foreign policy. With the Joe Biden administration set to reveal its ‘Indo-Pacific Economic Framework’, the Quad may just have a chance at putting together the economic agenda it has sorely lacked so far.

Second, the quartet must look to rope in other like-minded nations through issue-based cooperation. Taiwan’s experience in fighting Chinese disinformation and cyber warfare could prove useful. Similarly, South Korea’s conservatives, who have inched ahead in the presidential election slated for March 9, have openly considered more issue-based cooperation with the Quad.

A business-as-usual diplomatic summit shows that the Quad has moved from the heady days of hype to an entrenched and energetic grouping that has carved a place for itself in the politics of the Indo-Pacific and regional security architecture.