Home Insights Why capital inflows are a pain and not a growth fuel? –...
Facebook
Twitter
WhatsApp
Linkedin
Email
Print 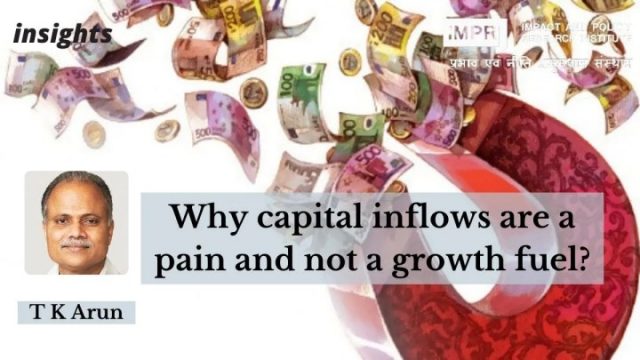 Alfred Marshall, the man who brought mathematical rigor to economics at the turn of the 20th century, used a very non-mathematical tool to demonstrate to students the concept of general equilibrium.

He filled a glass bowl with marbles, held it up for students to see, and pushed and prodded a marble near the bottom with a stick to show how a whole lot of other marbles rearranged themselves inside the bowl, to settle down to a new stable arrangement.

In an economy, things are interdependent at several removes from immediate proximity. So, it should come as no surprise that the poor and the jobless are affected by the swings of the Sensex, although most of them might be completely unaware of this aspect of their lack of agency over their lives. It is up to policymakers to make sure the political economy of stock-market high jinks does not hurt the poor.
Sauce for Kubera…

We saw the incongruous sight of billionaires becoming bigger billionaires, even as the poor became poorer during the pandemic, as real economic activity suffered but money poured into the stock market from domestic and foreign institutional investors (FIIs), pushing up the value of shares and the net worth of their owners.

As money moves out, the billions will get deflated and the billionaires will climb down from Cloud Nine, while the rest of us will struggle on as before – this bit of comfort is actually false.

Over the 10 years of 2012-21, $153.2 billion poured into India as net portfolio flows. These flows balloon share prices. India’s forex reserves kept growing. In just one of these 10 years did India run up a current account surplus. In the remaining years, India had a current account deficit (CAD).

In other words, unlike in the case of China, South Korea, Japan, and the oil-exporting nations, India’s forex reserves are not the proceeds of earning a command over foreign resources through the export of goods and services larger than imports.

India’s forex reserves are unabsorbed foreign capital inflows, of the direct and portfolio kinds. This makes India more resilient against external shocks, right? So, why crib about them? That is because foreign exchange reserves affect the poor and the rich differently.

When foreign investment flows are absorbed, in the net, the economy invests more than it has saved, permitting growth that is faster than what would have resulted from domestic savings alone. This is a good thing. That is why a moderate level of CAD is a good thing.

When more capital gushes in than can be absorbed, they add to forex reserves and that creates a cost. If RBI does not buy up excess dollar inflows, the supply of dollars would outstrip the demand, the price of the dollar would fall. That is, fewer rupees would be required to buy a dollar. Is that a problem? Isn’t a strong rupee a sign of economic strength?

If the rupee’s strength had stemmed from export competitiveness, that would have been the reflection of higher productivity, and we should be happy. But if the rupee strengthens on account of unabsorbed capital inflows, that hurts our exports. A garment that costs ₹100 would be $2,

If exports are hit because of a needlessly strong rupee, employment in export industries would be hurt, production would go down. At the same time, a stronger rupee would make imports cheaper, some costs would come down.

An industry that has borrowed abroad would find it easier to service their loans, those who lead a relatively more import-intensive lifestyle would hum a happy tune, while those who lose their jobs curse their fate.

So, RBI intervenes to buy up surplus dollars and keep the exchange rate from getting overvalued. But when RBI buys dollars, it releases a flood of rupees into the system. This additional liquidity could feed excess demand and feed inflation, which would hurt the poor and those living off fixed incomes.

So, RBI mops up the rupee counterparts of its dollar purchases by selling the government bonds it stocks up. When the supply of bonds increases, their price goes down. When bond prices go down, the yield goes up.

When foreign portfolio money pours into jack-up share prices, unabsorbed dollars tend to depress growth as well. The net worth of the rich goes up, the poor lose potential jobs and incomes. What is the way out? We could curb capital inflows. Or we could improve conditions so that more capital could be absorbed.

2014-15 was the last year when gross fixed capital formation as a share of GDP stood above 30%. Since then, while capital has been flooding into the economy, this share has stayed about 27%. The world is awash in liquidity. If only our leaders could create conditions to utilize this flood of capital to foster growth, instead of bloating billionaires.

This was first published in the Economic Times as Reading the smoke signals right: Why capital inflows are a pain, not a growth fuel on 15th February 2022