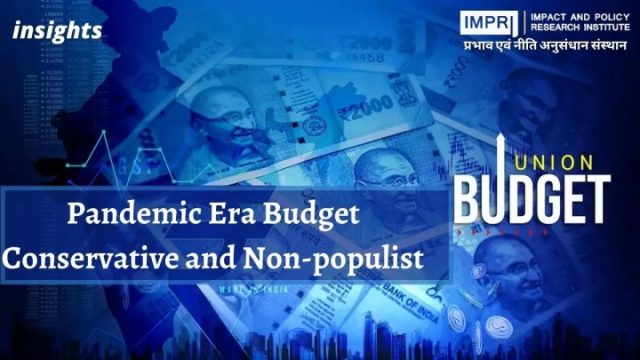 Dheeraj Nayyar began the session by setting the budget within the context of the pandemic. The shock that the Pandemic gave to the middle class, livelihood, and standard of life in India was great. The scenario of recovering rate is slow but the key challenge would be to sustain it at 9%. The lurking macro challenges of consumer inflation which is the result of loose monetary policy globally, and rising oil prices.

The government resorted to a classic stimulus also because the Investment cycle and exports have remained lower than  35 % increase in capital punishment. Government expenditure is the only force able driver of economic growth, but it can be a catalyst but this cannot be sustainable. The fiscal Deficit is high at 6.9% due to Pandemic. The budget seems to be made for the time based on sound economics and is both conservative and non-populist.

Saugata Bhattacharya warned of global challenges in the near future which the budget seemed to have missed, US federal reserve is aggressively tightening their monetary policy, the G-10 central banks are likely to increase rates. Global Growth according to IMF is going to slow down 5.9 to 4% and China is also slowing down.

Trade is also likely to slow down which was the key driver of growth in the past if not in terms of GDP but a more substantive view. The major problem for India would remain the Aggregate Demand and the MSME chain needs to be evaluated. The budget seems to be catering to medium-term potential growth aspects only.

Sounding a warning, Dr. Pooja Mishra points out that, “RBI needs to watch out for the Imported Inflation and Wholesale Price Inflation. While consumer confidence is low, capacity utilization also remained low and labor force participation rate is low, even though we have reached pre-pandemic rates.” Government should have ideally balanced between short-term revival and medium-term growth potential, and the government sacrificed the latter.

To respond to the challenge for disguised unemployment, the response is to nurture Mega Cities, Government is hoping for a move to cities that have to be sustainable. Bankruptcy Code needs to come back which was put on the back burner due to the pandemic.

Along with quick dissolution, there is also the need for a quick resolution, the two years. Implementation of all these schemes is key. A step in the right direction is the National Land Monetisation Corporation. The focus of the budget has been on capital expenditure which yields a greater multiplier effect.

The issue remains at the lower end of the income brackets which need a greater push towards. The Indian government budget has always been expansive and ambitious. Budgets have tended to essentially forget expenditure constraints. Are we changing India’s Economic Management Strategy?

Subhomoy Bhattacharjee acutely observed that “Deliverables for the government that is health, education, and agriculture; all three sectors which cater to the lower end of the income brackets lies not with the central but the state government. The difference between the northern and southern states is expanding which points to this assertion.” At the same time, a nudge for labor has to come from the centre.

Gender Budget was not part of the Finance Minister’s speech. Gender Budget has increased this year, to be 5% of total expenditure. Though the average has remained the same over decades and there is no real change.

The actual spent column from Gender Budget includes Part A for women’s s scheme and Part B are schemes with 30 percent allocation for women. No information is available on the latter. Nalini Gulati urges that “Gendering Budget is necessary at all levels and should have become a  composite part of design, analysis, and evaluation of the budget statement.”

Women only made it to the budget as rhetorical recognition with three schemes Mission Vatsalya, SAKSHAM, and Poshan 2.0. A lot of existing schemes come under a new umbrella with a new name in the budget, making understanding the budget more obscure.

On the whole, cumulatively Budget is yet to adopt a gender lens. On the whole, ambition plans for economic recovery lack a gender approach even when there is recognition that pandemic’s experience is gendered.