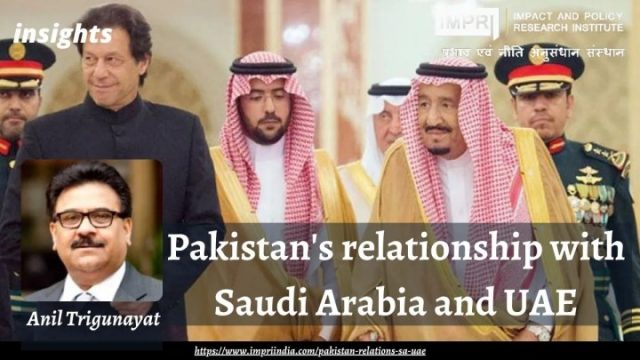 For Pakistani Prime Ministers, Saudi Arabia is literally the first stop and a Mecca in real and not only religious sense of the term. The then PM Imran Khan rushed naked feet to seek the blessings and financial assistance from the Kingdom and kept on going. But he put his foot in the mouth when he tried to criticize Riyadh and other GCC countries for going soft on India in the wake of Pulwama carnage and Balakot strikes as well as Art 370 abrogation mainly due to economic reasons.

He brought a struggling Islamabad to the heels despite beseeching his Chinese ‘Iron Clad ‘friends to bail out as Saudis and Emiratis called back their loans and financial facilities. He indulged in a political and diplomatic Hara-kiri as he tried to build an alternate Islamic structure with Turkey, Malaysia and Iran while undermining the religious supremacy of the Custodian of the Two Holy Mosques and the ‘OIC” where Pakistan always goes scot-free.

Imran Khan indulged in a political and diplomatic Hara-kiri as he tried to build an alternate Islamic structure with Turkey, Malaysia and Iran while undermining the religious supremacy of the Custodian of the Two Holy Mosques and the ‘OIC” where Pakistan always goes scot free. Under pressure in 2019, Imran Khan cancelled his trip to Kualalumpur Summit. But the damage was done and initial brownie points with GCC were frittered away. This peeved the Saudis even more as such they did not appreciate Islamabad keeping their support off the table in the Yemen war even as the retired Pakistani General Rahil Sharif was heading the coalition forces.

Cumulative impact of the Imranian faux pas had the Saudis go slow on various proposed investments in Gwadar and elsewhere also as the Kabul transition was going haywire for them where Rawalpindi was the key actor. Besides Saudis had also understood the Pakistani complicity in continued cross border terrorism even as they hoped that Islamabad and New Delhi will be able to resolve their differences through dialogue and their relationship with Delhi burgeoned. Moreover, Crown Prince Salman (MBS) is keen to revamp the Saudi image as a modern but religious country with his ‘Vision 2030’. Although Riyadh may not dump their Islamic brother but can surely force it to abandon the tails of terrorists and extremist groups.

Amidst a high voltage drama, as Imran Khan went down abusing Uncle Sam and accusing their foreign hand, the Sharifs and Bhuttos were back in the saddle as Army Chief switched their blessings from one to the other. Soon after PM Shehbaz Sharif decided to take his family and friends on a Saudi religious pilgrimage as well as on a bilateral visit during the holy month of Ramadan where prayers are duly answered. Sharifs have a long history of personal friendships and presence in the Kingdom, including their businesses.

Hence it was but natural that traditional ties were sought to be revived. Although the opposition tried to accuse the new government in indulging in corrupt practices and avoidable financial burden of travel by the Pm and entourage, he wriggled out of it by flying in a commercial aircraft at his own expense. But it is in the nature of politics to twist things universally without which politics is no fun. But the visit of PM Sharif appears to have gone well if the statements and commentary are to be believed.

PM Sharif and MBS (Crown Prince Mohammed bin Salman) met in Jeddah and when the latter committed full support to Pakistan in its difficult times and assured of continuation of assistance and investment cooperation while agreeing to diversify trade exchanges and to provide fuel financing facility. This will be done through the Saudi-Pakistan Supreme Coordination Council at the highest level.  Riyadh agreed to consider possibility of supporting the Kingdom’s $3 billion deposit in Pakistan’s central bank by extending its term or through other options.

As the discussions were held to identify critical sectors for economic collaboration, including the mining and industrial sectors, holding of investment forums will enable greater B2B integration at the P2P levels with G2G support. Pakistan also appreciated the Kingdom’s efforts and initiatives in climate change, addressing environmental challenges, and improving the quality of life, particularly the ‘Saudi Green’ and ‘Middle East Green’ initiatives launched during its presidency of G20 in accordance with MBS’s ‘Vision 2030’.

Sharif also condemned the Houthi attacks on Saudi targets and stressed the need for the international community to take measures to ensure the Houthis’ involvement in political consultations under UN supervision to reach a final and comprehensive political solution. They wished to upheld the initiatives to achieve a comprehensive political solution to the Yemeni crisis following Security Council Resolution 2216, Gulf Initiative, and other related mechanisms. Riyadh is keen to end this expensive and infructuous and extended conflict in which Iranian role is equally important for any outcome and resolution.

On the issues in the sub-continent, Saudi Arabia welcomed the statements of the Pakistani PM, asserting his country’s keenness to find a solution to all disputes with India, including the Jammu and Kashmir dispute. Most countries in West Asia would rather not chose between India and Pakistan and hence are hopeful of some viable modus vivendi between the two nuclear powers. A difficult ask unless Rawalpindi drops its terror armour. If one were to read the tea leaves the good will and congratulatory message by PM Modi and response by PM Sharif augur well. Yet keep the fingers crossed as the deep state there has to be on board if some breakthrough is to be anticipated.

On his way back from Saudi, on April 30   PM Sharif also met Crown Prince Sheikh Mohammed bin Zayed of UAE and reiterated the historic ties while trying to work out some more assistance.

Anyways, given its financial difficulties and the statements by PM Sharif on foreign policy one would see a more balanced demarche to revive and intensify ties with regional countries more so with GCC while retaining its special relationship with Egypt, Turkey and Iran and efforts to couch back to Washington and Moscow while remaining in the Dragon’s embrace. Not an easy trajectory but if an economic bailout is worked out in the interim people of Pakistan may heave a sigh of relief.

This article was first published in The Indian Observer as Trigs on Track-Diplomacy Unwound: Pakistan retrieving Riyadh.

Read another piece by Anil Triguniyat on West Asia – Rapprochement in West Asia needs to move forward in IMPRI insights.