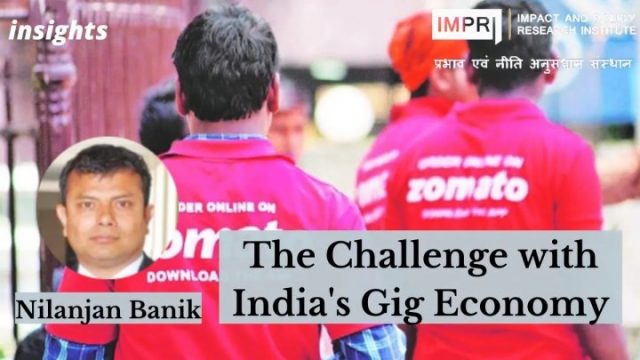 The continuation of the Russia-Ukraine war is raising the fear of an imminent stagflation (a combination of inflation and unemployment led by a low growth). Worldwide inflation numbers are on the rise. Most sources of data are suggesting a higher inflationary regime. In March 2022, the US, the largest economy in the world, recorded a 41-year high inflation of 8.1%.

Inflation numbers for India are no different. The present day Consumer Price Index (CPI) is inching towards the 7% mark. With economic growth slowing, and the war and pandemics causing supply-side glitch, the fear of unemployment will also increase. Although organised sector employment is taking a hit the world is noticing a paradigm shift from 9-5 jobs to a newfound type of jobs which is created by the gig economy.

Take for instance, Kaushik Banik. He is software professional who works from home and is quite happy about it. He earns handsomely, an hourly wage rate of $35. There are millions of persons like Kaushik who cares less about war, pandemics and supply-side glitches. All they require is a computer/mobile handset that will connect them to the outside world. At a time when fewer 9-5 jobs are getting created or disrupted because of war and pandemics, the spread of gig economy is a welcome move.

There are now close to 15 million gig workers in India. Delivery boys, cleaners, consultants, bloggers, etc., are all part of the gig economy.  These types of jobs are usually platform enabled. As the work is job-specific, workers using these platforms have the flexibility to work for more than one contractor. A food delivery guy can work for both Swiggy and Zomato, and yet can drive Uber during some other time.  Similarly, the aggregators may provide more than one type of service. For example, Uber which is generally known as a taxi service aggregator also has Uber Eats which is a food delivery and online take out service App.

The platform-enabled gig economy can accommodate a large number of buyers and sellers, and there is absence of entry barriers. The gig economy has helped to reduce information asymmetry associated with job search costs. In India, for example, before the advent of the digital world, job seekers regularly waited in line ‒ sometimes all day ‒ to register at the national employment exchanges for their job search.

Managers are also happy to recruit in a gig economy. As gig economy usually operates on the basis of ‘standardized’ outcomes. As the job performed is outcome-based, the risks associated with moral hazard or asymmetric information are mitigated. The rating systems on platforms for task-based services also ensure that only the most standardized and efficient suppliers get rewarded in the long-run.

Women workers are gaining, and the gig economy is resulting in gender income equality. Most of the workers working in the food delivery business in South East Asia are women workers. Women comprise more than a third of 15,000 users of the digital platform Souktel in the West Bank and Gaza region, but only 19% of the entire labor force in the same area. There are no barriers based on caste, religion, gender, and location.

There is a spillover effect on other sectors. The lower price of services associated with the gig economy has generated consumer surpluses which can be spent on other sectors, with a multiplier effect on income and employment generation. For example, after the introduction of taxi services by Uber and Ola, taxi fares were reduced in major cities in India.

Alcohol-related motor vehicle accidents and traffic congestion has also come down. There are also other benefits of ridesharing leading to less traffic congestion (less time) and other motor vehicle accidents. There are also environmental benefits. Compared to when cars stand idle in traffic, carpooling and car sharing contribute to a lower carbon-footprint.

But all is not hunky-dory about the gig economy. The gig economy holds serious challenges in upholding labor rights. Gig workers are not covered under standard employee contracts. There is no scope of compassion for the workers should they fail to perform the job due to something such as falling sick or a broader downturn in the economy decreasing business.

The commoditization of work means gig workers are vulnerable to fluctuation in demand. The absence of social security makes things worse for the gig workers. Those who consider gigs as their full-time job are not even employees of the company, so they do not receive any other benefits provided to employees, like health insurance, paid time off, family leave protection, etc.

New technologies have witnessed startups like Uber and Deliveroo balloon into global corporations with only a handful of employees, while the vast majority of their labor force have been mislead and are wrongly categorized.as ‘self-employed’. In this connection, several lawsuits have been filled in the United States against Uber for misclassifying drivers as independent contractors, both at the State and federal level.

The major potential problem is that gig workers are not in tune with the legal definition of employees. Every State has its own definition, but it mainly depends upon the degree of control that the company has over the worker. It is difficult for an individual worker to afford the cost of legal proceedings. This makes gig workers more vulnerable to settlement, even when they have a good legal claim. The only solution to this is class action lawsuits, but companies have started putting arbitration clause in their contracts to prevent the risk of this type of litigation.

In 2018, in a landmark judgement the Supreme Court of California in Dynamex Operations West, Inc. v. Superior Court of Los Angeles, enacted a new law (which later popularly came to be known as Assembly Bill) which needed companies (such as Uber and Lyft) to consider and treat their workers as employees and not merely as ‘independent contractors’).

The Supreme Court of California, proclaimed, by consensus, a new test for deciding if a worker is an employee or an independent contractor. According to the test (called the ABC test), a worker would be presumed to be an employee unless the employer can establish that it has complied with these three distinct requirements: (a) the work is free from the direction or control of the hirer in relation to the performance of its work; (b) the worker does work which is outside the usual course of the hiring entity’s business; and (c) the worker is customarily involved in an independently set up trade, business, or occupation of the similar nature as the work performed by the hirer.

It seems that even though California has become the first state to attempt to increase the rights of gig workers, this change itself has brought more voice to the employers than the voice that was supposed to be given to the gig workers.

In India, taking a cue from what happened in the State of California, a PIL was filed by the Indian Federation of App-based Transport (IFAT) Workers in the Supreme Court, with the idea of giving social security benefits to the cab drivers in India. Unfortunately, nothing worked out, with Uber stopped using the word “partner” in their agreement and replaced that with “customers.”

Also, there are no laws that to prevent collusive activities of companies exploiting the workers and consumers, alike. In recent times, Competition Commission of India has orders probe into Swiggy and Zomato for unfair trade practices. Also, from the consumption side, regulations related to data privacy have to be formed and enforced. In a digital world, an enormous amount of data about individuals and their activities captured by platforms is bundled and sold to various companies without taking consent of the consumers.

A market can be created where, for instance, consumers are offered discounts on the online platforms if they agree to sell their data. Also, the big companies such as Facebook, Netflix Google, etc have no social obligation and continue to pour money for growth of their respective company, with the objective to please their shareholders. Seldom there is an effort by these companies to reach out to individual governments for taking up any social clause. Individual governments can clamp down on tax evasion by making it mandatory, and use the money raised, to invest in public services to counter growing income inequality.

This article was first published in The Wire as All is Not Well With India’s Gig Economy on 9 May 2022.